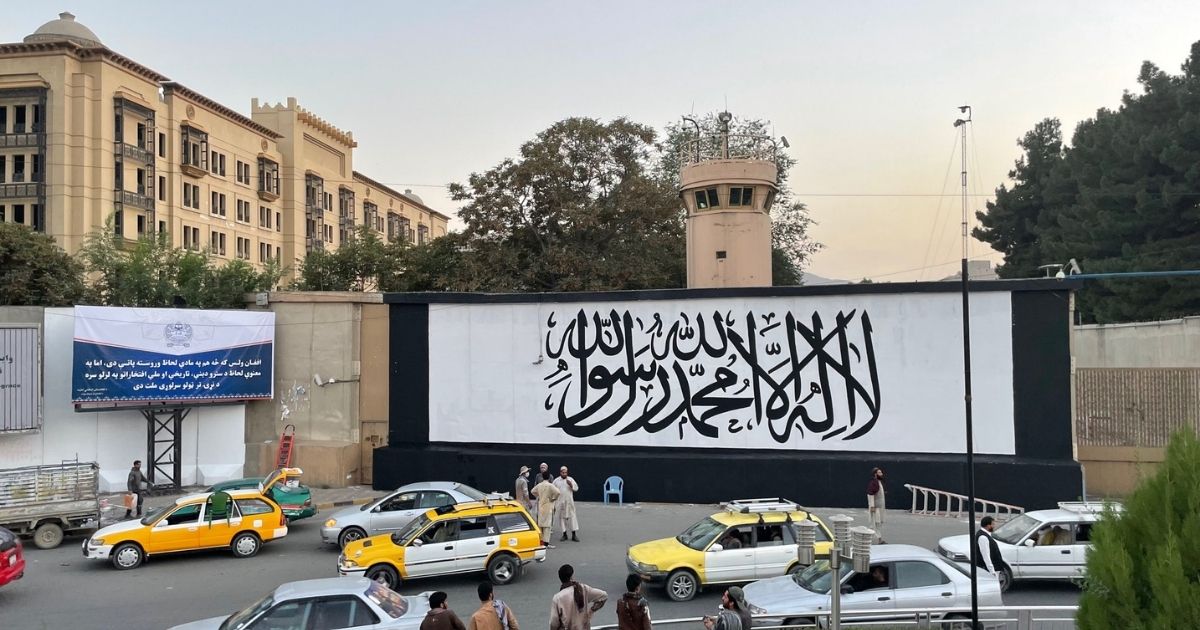 The following article, Taliban Jab US by Adding Massive Flag Mural to Former Embassy Compound, was first published on Flag And Cross.

The Taliban painted a mural on the compound wall of the United States Embassy building in Kabul in what appears to be an attempt to mock the United States after its mishandled withdrawal from Afghanistan under President Joe Biden.

Emma Graham-Harrison of The Guardian shared a picture on Twitter on Monday showing a giant flag of the radical Sunni Islamist militant group painted in front of the entrance to what used to be the U.S. Embassy.

The flag contains a Quran verse written in Arabic calligraphy over a white field that reads, “There is no deity but Allah. Muhammad is Allah’s messenger.”

Entrance to the (former?) US embassy in Kabul today

Murals freshly painted over with a giant Taliban flag pic.twitter.com/ASE4I0zvoG

Another image of the compound walls of the embassy building, obtained by Fox News, shows the Taliban’s coat of arms painted in another section of the wall.

The murals bear similarity to those on the walls of what used to be the U.S. Embassy in Tehran, Iran. After the nation ended its diplomatic presence in the country following the Iran hostage crisis, anti-American political graffiti appeared on the walls of the embassy building and still stands today.

The United States left Afghanistan at the end of August with the last American plane leaving Kabul, abandoning several Americans who wanted to leave in the hands of the Taliban.

Texas Rep. Mike McCaul told Fox News on Sunday, “We have six airplanes at Mazar Sharif Airport — six airplanes with American citizens on them as I speak, also with these interpreters — and the Taliban is holding them hostage for demands right now.”

“The state has cleared these flights and the Taliban will not let them leave the airport,” he said.

According to a pregnant American woman stranded due to the Biden administration’s incompetence in ensuring all Americans were safely taken home, the militant group is going “door to door … trying to see, you know, if anybody has a blue passport.”

The Taliban consider the exit of American forces as a defeat of the United States at their hands after 20 years.

Since the end of the American occupation, the Taliban has moved to take control of Afghan society completely.

The group has begun undoing many years of progress in women’s rights, leading some women to resist the Islamist outfit’s radical anti-gender-equality policies.

The Taliban suppressed many of these protests by firing into the air and deploying tear gas against unarmed women.

In an audio recording obtained by The Epoch Times, Taliban fighters were recorded saying, “Thank God now the Americans have withdrawn from the airport and everything is in our own hands.”

The fighter further swore to “hunt down everyone” who worked with the U.S. if given the order to do so.

According to a Politico report citing a State Department official, the “majority” of special immigrant visa applicants in Afghanistan were not evacuated due to issues in the way the Biden administration mishandled the withdrawal.

The Taliban has also started taking over Afghanistan’s foreign policy since the previous government’s collapse, reaching out to countries such as China, which has expressed willingness to work with the Islamist group known to have sheltered al-Qaida, as reported by Insider.