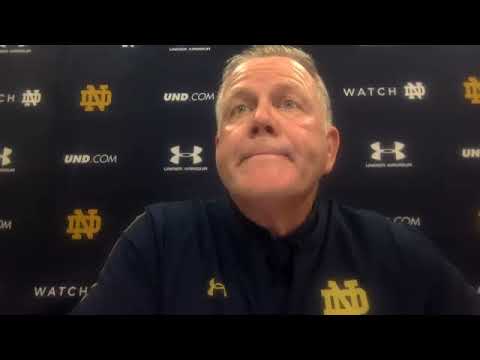 Despite winning the game,  ninth-ranked Notre Dame struggled to put away the Seminoles and was outscored 18-0 in the final 13:42 of the game, according to ESPN.

That is what appeared to be on Kelly’s mind when he riffed on an old joke in the postgame interview.

“I’m in favor of execution,” he said, deadpan. “Maybe our entire team needs to be executed after tonight. We just didn’t execute very well.”

Some on social media were aghast.

“I’m in favor of execution. Maybe our entire team needs to be executed tonight.”

I think he should resign by lunch tomorrow honestly

I’m not easily offended. That was bad.

Kelly was ready with a response when he had to explain his comment.

“It’s an old John McKay quote,” the Notre Dame coach said during his postgame news conference as a reporter followed the scent of outrage and demanded to know what Kelly was thinking.

“I was kidding. It was tongue-in-cheek. It wasn’t funny? … I was talking and, you know, making a joke about it. It was taken serious? Are you people crazy?” he said.

John McKay was a legend at the University of Southern California, where over 16 years he won four national championships.

With that as the background, when McKay was asked about his team’s execution, he had a ready reply.

Brian Kelly was attempting to quote the late John McKay…1976 was a different time, man pic.twitter.com/b7bWYlWLpK

Kelly said he may have misread the lay of the land by trying to inject humor into a society that has little use for it.

“It’s a John McKay quote that he used after a game,” he said.

“I was stealing one of his old quotes and being funny. I guess nobody likes to be funny anymore. So, yeah, if you want to, you know, take me to town on that, please do.”

Some observers got the joke right away.

“To anyone who has any problem whatsoever with what Brian Kelly said after the game: Immediately log off and find a hobby. Make some new friends,” college football analyst Danny Kanell tweeted.