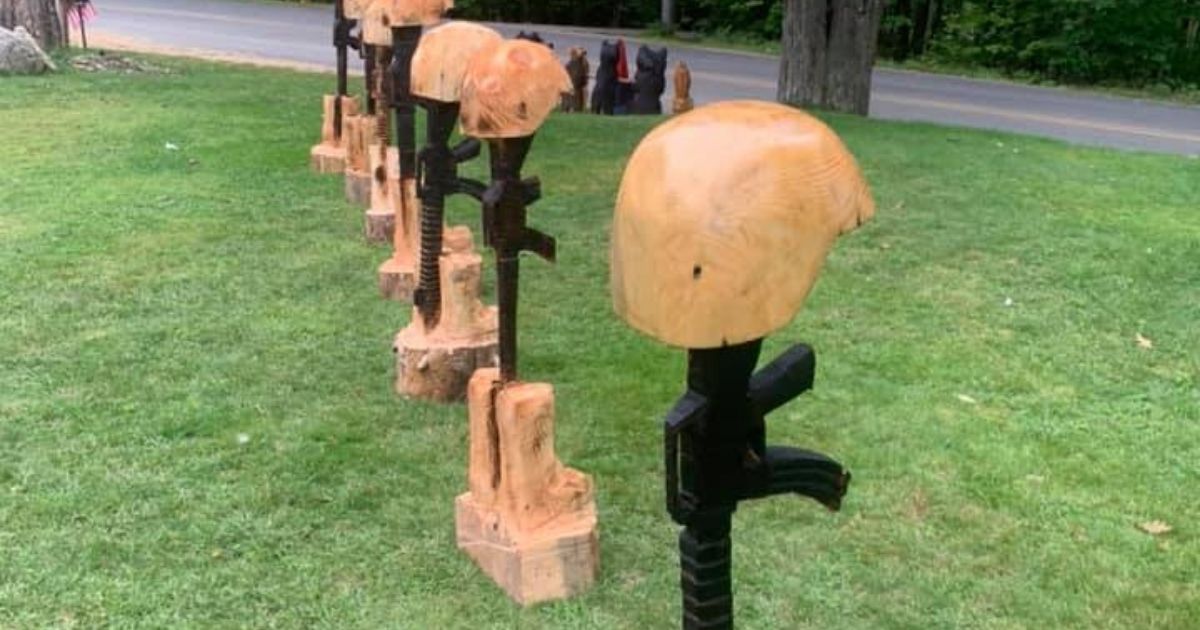 The following article, Man Hand-Carves Battle Cross Statues in Honor of Troops Who Fell in Afghanistan, was first published on Flag And Cross.

Terrible things happen constantly, and it’s easy to feel helpless to aid those who are suffering when the suffering is so great, but there are people who draw on their arsenal of skills and talents to offer help, in whatever form they can, whatever that may look like.

Stephen Wing is one of those people, and what his service looks like is crafting one-of-a-kind memorial pieces for the families of the 13 soldiers who were killed in Afghanistan last month.

Wing, from Gilford, New Hampshire, owns Wings Custom Carvings, where he uses a chainsaw to carve pretty much anything in wood. The business’ Facebook page says, “have an idea that you want carved and we will do it” and “[n]othing we won’t attempt.”

It was Wing’s own idea to identify the families of the soldiers killed in action and present them with a customized memorial piece.

“Let’s see if This works,” he posted on Aug. 28. “I am trying to reach out to the families of our most recent tragedy in Afghanistan. I would like to donate one of these carvings to all the thirteen family’s for our fallen soldiers It’s a long shot but share away please.”

As the post circulated and people helped connect Wing though social media, he was able to begin collecting the contact information for the soldiers’ families.

He kept people updated through his Facebook page as he received names and started creating the memorial pieces, many of the photo updates also featuring his trusty canine companion, Bear.

By Saturday he had confirmed 15 recipients, families of the 13 soldiers he would be sending the carvings to.

“I wanted to say thank you to everyone across the United States of America for coming together to try and make this happen for the families of our 13 most recent Fallen Soldiers,” he posted. “With out your help this would have been nearly impossible but I’m great full to announce out of the 13 families we are going to be able to get there battle cross to the following.”

As often happens when someone has a wonderful idea for an act of kindness, people wanted to know if there was any other way they could help Wing with his noble undertaking.

“Now a lot of people are asking how to donate for shipping cost and to be honest I don’t even know yet have to price it all out Tuesday,” he shared on Sunday. “So if you would like to help you can contact me.

“If there is money left over from the donations to ship it will be divided between all of the families evenly. This is to help the families and let them know we stand with them and also grieve with them. Thanks for all of your help in this. Couldn’t have done it with out all of you.”

Wing is a great example of the fact that you can help with any skill set you possess, and that being kind is contagious. There is still some good in this world, and sometimes social media is even the tool that allows it to spread.