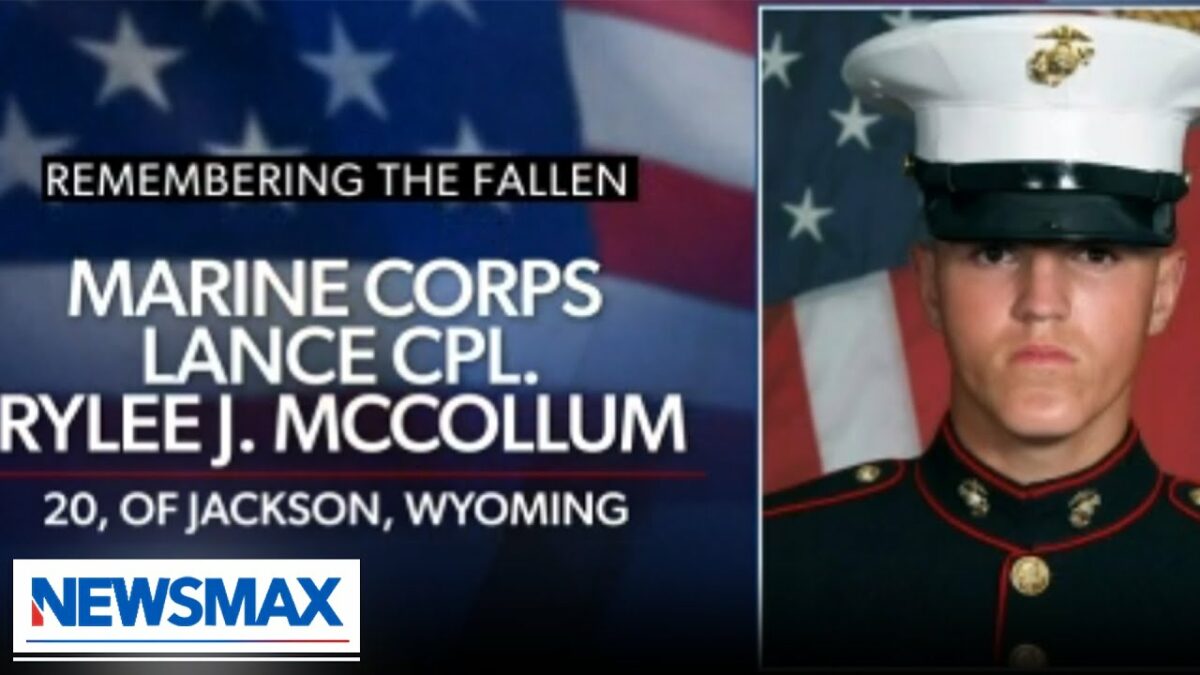 The following article, Gold Star Sister: Within 15 Seconds of Meeting Biden, I Was So Disgusted I Walked Out on Him, was first published on Flag And Cross.

The sister of fallen Marine Lance Cpl. Rylee McCollum is speaking out against President Joe Biden after her brother was tragically killed in the suicide bombing near the Kabul airport on Aug. 26, making him one of the last American casualties of the War in Afghanistan.

Cheyenne McCollum courageously spoke with Newsmax’s “Wake Up America” on Monday to discuss meeting with the president at the dignified transfer of her brother’s remains.

“I wouldn’t necessarily say I stayed to meet him. I stayed to support Rylee’s wife because I didn’t want her to sit alone, and she wanted the chance to look him in the eye, so I sat beside her to do that as well,” McCollum said.

“I stayed, and when he came up to us about 15 seconds in I ended up having to walk away. It was so insincere, and he didn’t look us in the eye, he gave her a pat on the knee and said, ‘I know what you’re going through — I lost my son.’ Which, he didn’t lose his son serving.”

She noted that the interaction was roughly three minutes long and spoke about how the president tried to relate it to his own son’s death from cancer.

“He just said, ‘There’s nothing I can say,’ and would just go on to talking about his son. … I don’t even think he knows Rylee’s name, to be honest. … He didn’t know or say anything personal. It was very scripted,” she added.

“Everything felt fake, if I’m being honest.”

McCollum’s wife is pregnant with their first child, making the emotions run even higher for the family.

Two GoFundMes set up were set up to support his wife, Gigi, and their unborn child’s education fund. The two campaigns have raised over $875,000 combined.

“He was so excited,” his sister said about how he was going to become a father. “He was gonna be such a good dad.”

The establishment media has painted Biden as an empathetic figure, but this interview suggests otherwise.

While it is hard to know what was going through the president’s mind during the dignified transfer, some in attendance were clearly upset with his cold behavior.

If the Biden administration properly accounted for the threat of the Islamic State group’s Afghanistan affiliate while withdrawing troops, this tragedy could have been prevented.

The McCollum family is just one of the 13 families that lost a service member, so it is reasonable for them to be upset with the president.

For those on the left who would like to create a false equivalency to the lives lost to coronavirus, they must be reminded that this was the result of policy, not a pandemic.

These service members sacrificed their lives to protect freedom and democracy overseas, only for their families to be passively glanced over by their commander in chief.

Continue reading: Gold Star Sister: Within 15 Seconds of Meeting Biden, I Was So Disgusted I Walked Out on Him ...