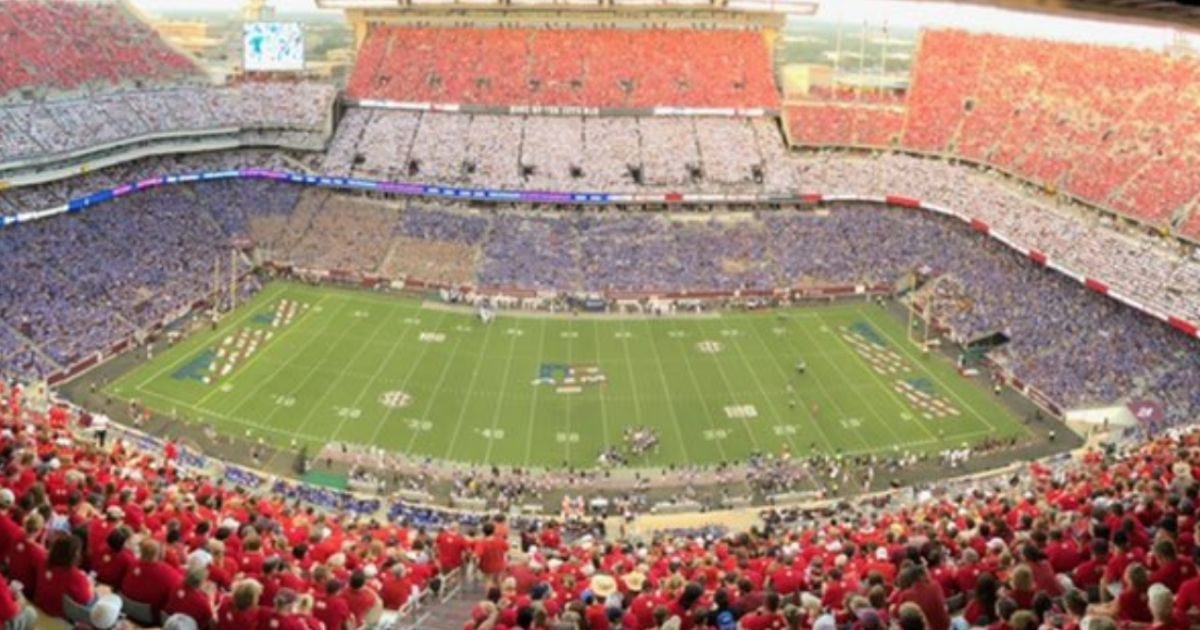 After a year of empty stadiums and coronavirus protocols, college football made its triumphant return this weekend.

While Americans across the nation showed up in their school colors to support their favorite universities, one particular school put on an incredible display of national pride.

After the horrific terrorist attacks on Sept. 11, 2001, the sports world paused for a brief time as the nation remembered the lives lost in the tragedy.

When the games got underway again, students at Texas A&M University wanted to find a way to pay tribute to the tragedy and raise money to send to New York.

In 2001 five students spearheaded an effort, with no social media, to paint the crowd red, white and blue for the Aggies’ Sept. 22 game against the Oklahoma State Cowboys. They sold over 70,000 t-shirts and raised a total of $235,000 for the New York Fire and Police Benevolence relief funds, according to Texas A&M Today.

While the funds raised were certainly helpful, the images that came out of the “Red, White and Blue Out Game,” as it came to be known, were priceless.

“What happened really demonstrates what being an Aggie is all about: We love and care for our neighbors and our nation, even when something happens 1,500 miles away in New York,” said Nick Luton, a member of the original planning team and Texas A&M Class of ’02 Aggie.

As the nation approaches the twentieth anniversary of the 9/11 attacks, current students at Texas A&M had the idea to recreate that powerful tribute.

While next Saturday will be 20 years to the day since the attacks, the Aggies are slated to play on the road against the Colorado Buffaloes.

For that reason, they decided to do the tribute a week early at Saturday’s home game against the Kent State Golden Flashes.

Texas A&M Class of ’22 member Claire Brown, who serves as the executive director of a student organization called Maroon Out, was one of the students who helped organize the 20th-anniversary event.

“Students here are super passionate about service and traditions,” Brown said. “Whether it’s Maroon Out or Fish Camp, you want to be a part of those things and that same fire is reignited in every single class.”

Just like the original football game, fans in the first deck were told to wear blue, those in the second deck wore white and those in the third deck showed up in red. Official event t-shirts, which were similar to the 2001 originals but with a 20th anniversary designation, were available to purchase in advance or right outside the gates of Kyle Field, 247 Sports reported.

Many things have changed in College Station, Texas, in the last 20 years. For one, a $450 million renovation to Kyle Field completed before the 2015 season expanded the capacity from 82,589 to over 102,500, FanBuzz reported.

One thing that has not changed, though, is the American pride present within the Aggies.

With almost 20,000 more people in attendance than in 2001, the images from Saturday were just as, if not more, inspiring.

Your school could never pic.twitter.com/qR6Llslsj9

The Red, White, and Blue looked lit from the field! Shoutout to @CCCreationsUSA and @WarehouseAtCC. Looking forward to our future partnership

The nearly 98,000 fans in attendance were treated to a 41-10 Aggie victory over Kent State. But perhaps even more satisfying than the win was the display of patriotism that took place.