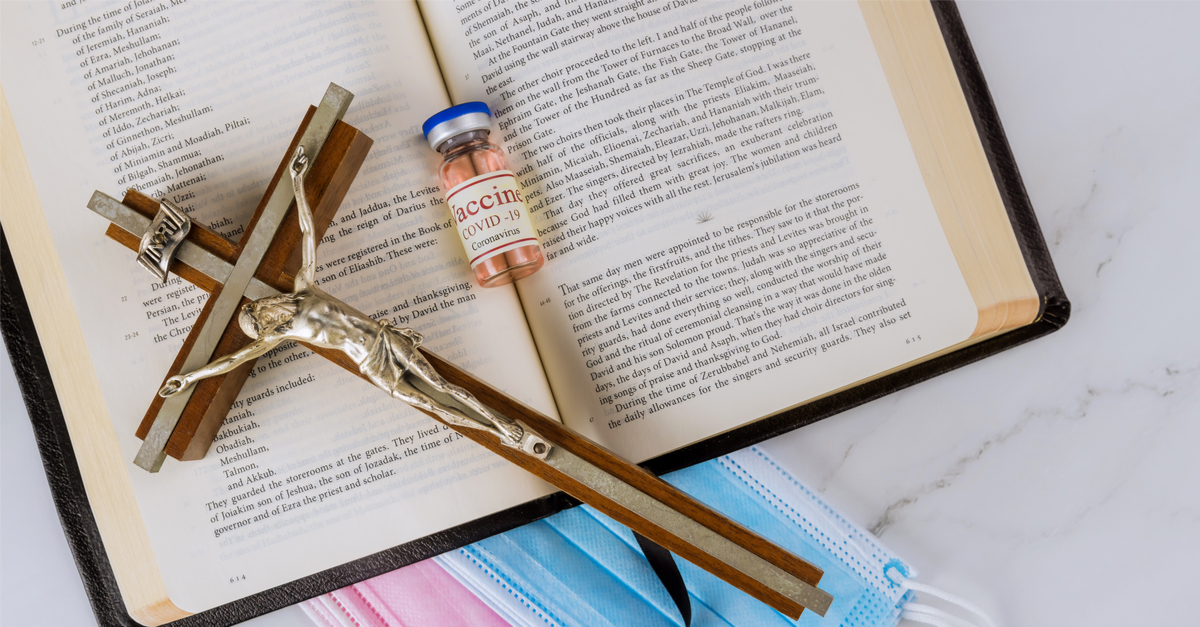 The following article, Religious Vaccine Exemptions on the Chopping Block as Major Churches Back the Jab, was first published on Flag And Cross.

There are plenty of reasons being touted for Americans who refuse to receive a COVID-19 vaccine in 2021.  Some believe that the inoculations were developed too hastily, and could perhaps be dangerous on account of that.  Others believe that there is a sinister, underlying conspiracy to enslave mankind, and this inoculation has a lot to do with it.

And then there are others, still, who cite their religious beliefs as a reason to abstain.  This line of thinking is coming under attack, however, as many of the world’s major religions appear to be backing the vaccine.  This has some in the conservative world working toward some sort of solution.

Religious exemptions could prove to be the latest legal battlefield of the pandemic, as Americans opposed to the coronavirus vaccine attempt to find ways around employer and government vaccine mandates.

Some evangelical pastors are reportedly providing religious exemption documents to the members of their church, and right-wing forums are sharing strategies to skirt vaccine requirements. Religious freedom groups are sending threatening letters to states, schools and employers and preparing legal challenges to fight vaccine mandates.

Only some federal agencies and states have made vaccination mandatory for workers, and more private companies are doing or considering the same. But experts anticipate that religious liberty challenges will pick up as more mandates are put in place — especially when there is no national standard.

But there are already “experts” pushing back against the possibility.

Thomas Berg, a self-described “strong supporter of religious exemptions” and a religious liberty advocate who teaches law at the University of St. Thomas in St. Paul, Minnesota, said he believes that there is a strong case to deny many of the religious claims and to test religious sincerity.

“In cases where you’ve got a lot of potential insincere claims — and I think there’s evidence that is what’s happening here in which people are raising religious objections when they’re motivated by fear of the vaccine or political opposition to it — testing sincerity makes sense,” he said. “We have to test sincerity or else we have to accept them all or deny them all, so I think the courts will provide room for testing that.”

This could lead to a very tense situation in which the government needs to rule on matters of religion and health both, and could open some doors that can’t be so easily closed.

Continue reading: Religious Vaccine Exemptions on the Chopping Block as Major Churches Back the Jab ...