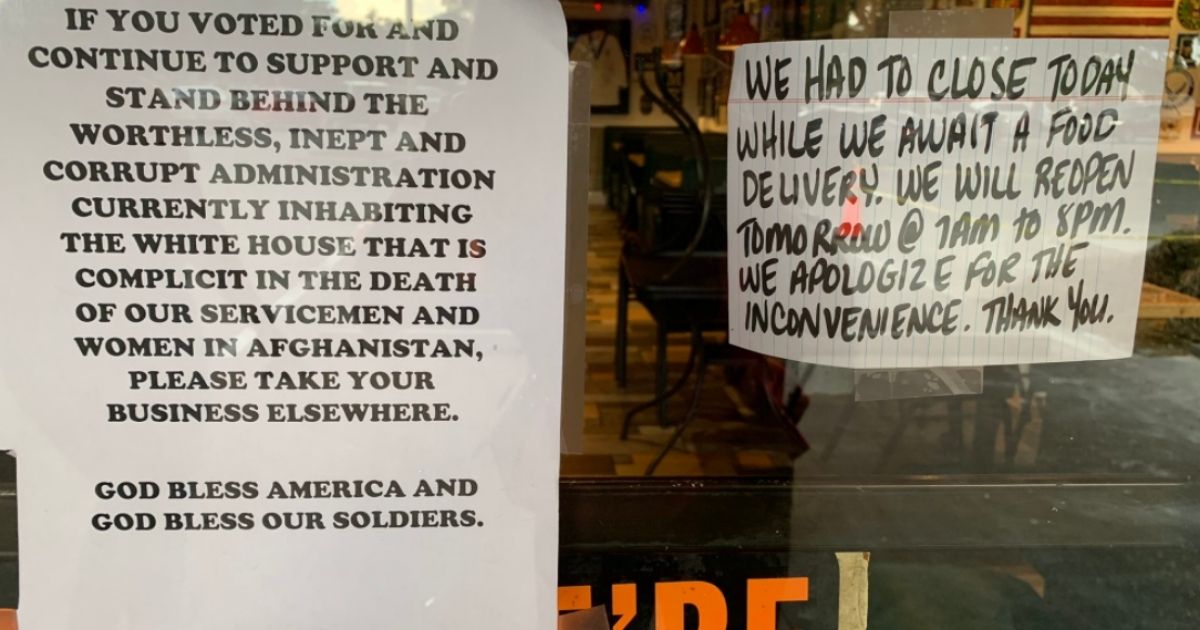 The following article, Diner Owner Who Refused Service to Biden Supporters Forced to Close Early in Popularity After Customers Flood Eatery, was first published on Flag And Cross.

After the Biden administration became more than one Florida diner owner could swallow, she told Biden lovers to go anywhere but her establishment.

The result? The diner was so popular it ran out of food and temporarily was forced to close on Wednesday, the New York Post reported.

Angie Ugarte, who runs the DeBary Diner in DeBary, Florida, has a wall of her establishment recognizing veterans, according to WOFL-TV.

And when 13 U.S. service members were killed in Kabul as part of the botched withdrawal of American forces from Afghanistan, she’d had enough.

She posted a message on her front door.

“If you voted for and continue to support and stand behind the worthless, inept and corrupt administration currently inhabiting the White House that is complicit in the death of our servicemen and women in Afghanistan, please take your business elsewhere,” the sign reads.

“It was the only thing I felt like I could do,” Ugarte told WOFL. “I was just angry. I was just let down. I felt like one of those mothers, or wives, or sisters who were gonna get that knock on the door.”

She said the sign was not a gimmick but an eruption of her anger.

“If you really, really still stand behind what’s allowed this to happen and the way it happened – which was unnecessary, then I really don’t want to be associated with you in any way and I certainly don’t want your business,” she said.

“I’ve got my share of bomb threats, death threats, and a lot of loonies. But mostly I’ve gotten an enormous amount of support that I really appreciate, so many active-duty military, veterans calling me in tears. I didn’t expect this in a million years. It wasn’t the purpose of my sign, but I feel like I’m doing something for them and they appreciate it, and I can’t let them down,” Ugarte told Breitbart.

But her popularity soared so much that she ran out of food last week.

“I’ve gotten so many people calling me from all over the world, from Europe, trying to purchase meals for veterans, which I still haven’t been able to organize,” Ugarte told the Daytona Beach News-Journal. “I think that the veterans will be fed for the rest of the year at the rate I’m getting donations.”

“Never in a million years did I expect (the response). I just know I’m one pissed-off American, and I know there’s a lot more of us out there.”

She said she would have done the same if former President Donald Trump had pulled a Biden, “But he wouldn’t have done that, I don’t think, because he’s always shown he cares about the troops. I appreciate that.”

Ugarte, who said she has a son-in-law who served in Iraq, said the sign was not about politics.

“This isn’t about being Democrat or being Republican,” she said. “If you honestly voted for Biden and still think that he didn’t mess this up completely … I have a conscience and I don’t want your business. I don’t want to make my living off of people who have blood on their hands.”

Angie Ugarte has a message to the Gold Star families, “your sons and daughters died doing the most honorable job there is in this country – they did not die in vain.” pic.twitter.com/opdJ0ithTI

Rod Phillips, who said he was a member of the Vietnam Veterans of America Florida State Council, came to thank Ugarte for her sign.

“I respect the presidency of the United States, but this could have been handled much better, much better,” he told the New York Post. “Being a Vietnam veteran and combat-wounded, I don’t wish war on anybody. But there is a proper time and place to get out of there.”