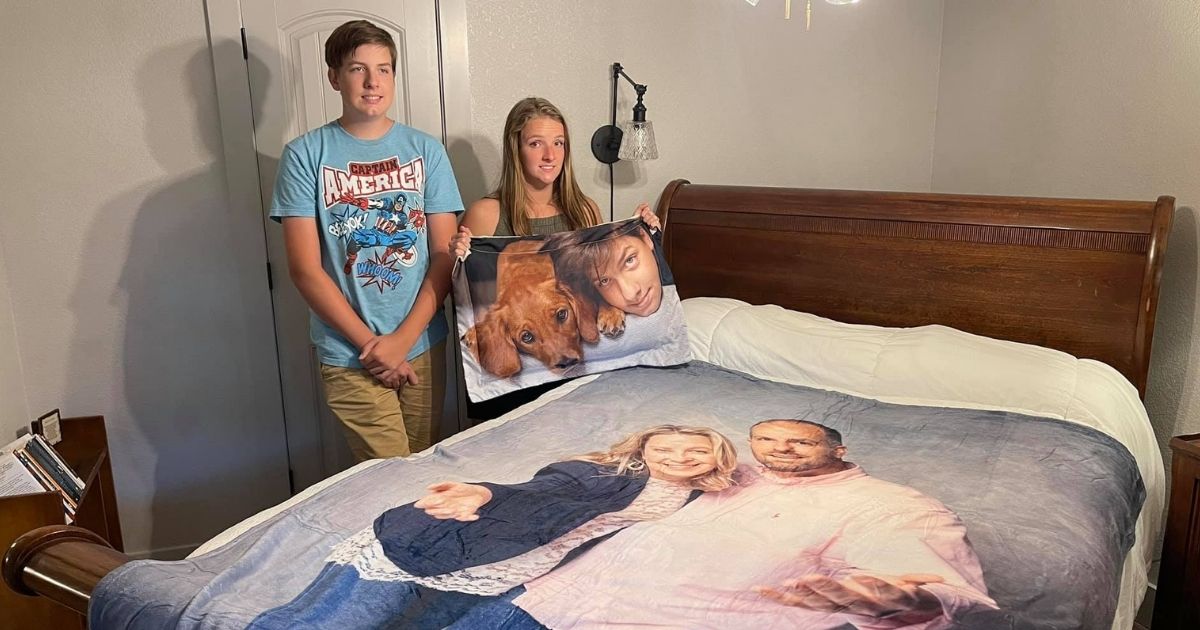 The following article, Parents Give Daughter Going Off to College Hilarious Gift for Dorm Room, was first published on Flag And Cross.

One of the biggest changes for many parents in the college years is being separated from their adult children.

Before college, school means going away for part of the day but still living at home, participating in family activities and generally being around.

But after graduating high school, that changes for those students who go away to pursue higher education and independence.

What’s a parent to do to keep tabs on their kid? Some call or text incessantly. A very few show up to check in when least expect it.

David and Whitney Scott of Arkansas settled on some bespoke dorm decor for their daughter Emma, who was about to leave the nest. And since they’re professional photographers, they had a lot of material to select from.

“As Emma heads to Harding University next week to begin her Freshman year, Whitney was looking for something for her dorm room that would convey love, provide reassurance as possibly embarrass her to her core,” David Scott posted on Facebook on Aug. 11.

“I think we found it. And yes, she’s thrilled.”

The photo shows an enormous throw blanket featuring a lifesize photo of her parents and a pillowcase featuring her brother and the family dog.

Emma is no stranger to her parents’ shenanigans. They told Fox News that David has always been the kind of dad who loved good-naturedly teasing his daughter, yelling “I love you” from the school drop-off line.

“Since before she was born, we have looked forward to the teenage years when we could have a little fun embarrassing her with all our parental love,” Whitney admitted.

It wasn’t a complete surprise, then, when Whitney and David presented Emma with their special, one-of-a-kind pieces that will ensure she feels close to her family whenever she’s in her dorm room. Whitney told Fox that Emma was “expecting some goofiness.”

“It’s done,” David posted after getting her all settled in on Aug. 18. “Our sweet girl is off on a new adventure at Harding University. It was a long day of travel, unpacking and decorating, but that’s the way we wanted it. Every moment is a blessing.

“She made it! We made/will make it. Most importantly, that blanket and pillowcase made it!”

“She was a great sport,” Whitney later said of Emma, despite the photos that show her making faces with the special gifts, as any self-respecting teen would.

“She kind of rolled her eyes, but she knew there was love and fun behind it.”

In the comments on his own post, he added that “she secretly loves it.” While jokes may be the family’s currency, it’s clear that they have a close bond — something that they can all cherish whether or not they’re reminded of that fact by an excruciatingly lifelike throw blanket.