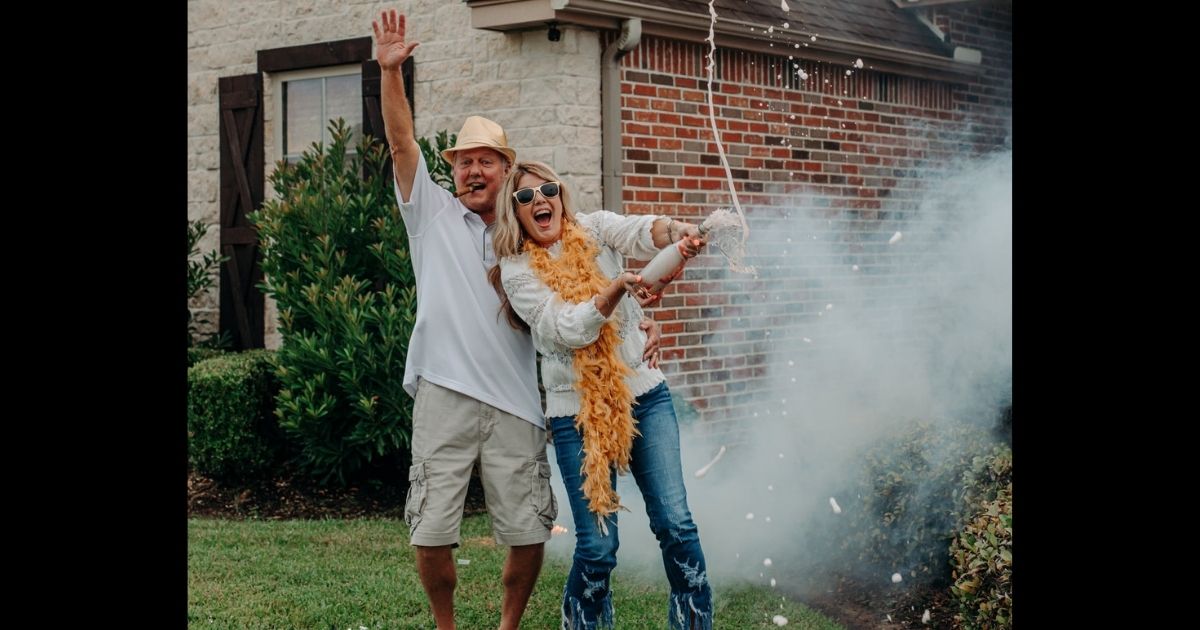 The following article, After Kids All Move Out, Empty Nesters Celebrate with Hilarious Photo Shoot, was first published on Flag And Cross.

Couples face the empty-nester stage of life in a variety of ways. Some are generally sad, feel like the house is too quiet and still have the same nagging concerns about their adult children as they had when their kids were under their roof.

Others party. Mitch Henslee, 59, and Betsy Henslee, 50, of Beaumont, Texas, definitely fall into the latter category, and they’re sharing their celebration with the world.

With the kids being 18, 21 and 30, it’s truly the end of an era. While others with younger kids were getting their first day of school pictures done, this couple arranged for a photo shoot of their own.

“When I was looking for a photo of poses for a senior shoot for my 21-year-old I found an empty nester photoshoot and I thought, ‘I’m going to do that when my youngest leaves,'” Betsy told Fox News.

“It was really just meant for us for fun. It’s our personality we like to have fun as a family.”

The photos start off by showing Mitch and Betsy standing in front of their home pouting and holding a sign with a broken heart that reads “So Sad…” But in the sequence of photos, the couple flips the sign and it reads “hahaha … Just Playing!” — then the partying begins.

Popping bottles, sending up cascades of confetti and standing gleefully behind a sign that said “Expecting 0 Kids!” while holding a large, silver zero balloon, the couple laughed, danced, kissed and celebrated their newly rediscovered freedom.

People commented to jokingly warn them that the kids come back and are still on insurance until they’re 25, and grandchildren will skew the empty-nestness. A few piped up to warn them that if they didn’t watch the partying, they might be expecting all over again.

Some commenters were a bit put off by the display in general, with some suggesting that the parents don’t actually care about their kids, but many understood exactly where the Henslees were coming from.

Betsy also clarified that her “close-knit” family has a good sense of humor — one of her kids even shared the photoshoot on their own page.

“Who said that an empty nest is a lonely one?” Bee Photography shared on Facebook on Aug. 19. “Now that the kids are finally grown & gone .. and they have the house ALL to themselves, Betsy & Mitch are living it up & pouring it up!”

“Well folks, it didn’t take us long to figure out the ‘Empty Nester’ thing!” Betsy posted on her Facebook page.

“We still miss all our girls, and the house is a little quieter, but its a party on the patio at the Henslees moving forward!”

The only downside to the whole arrangement might be that now the messes can be tracked to their maker.

“Now it’s going through the house and realizing when the house is messy, it’s not them,” Betsy said.