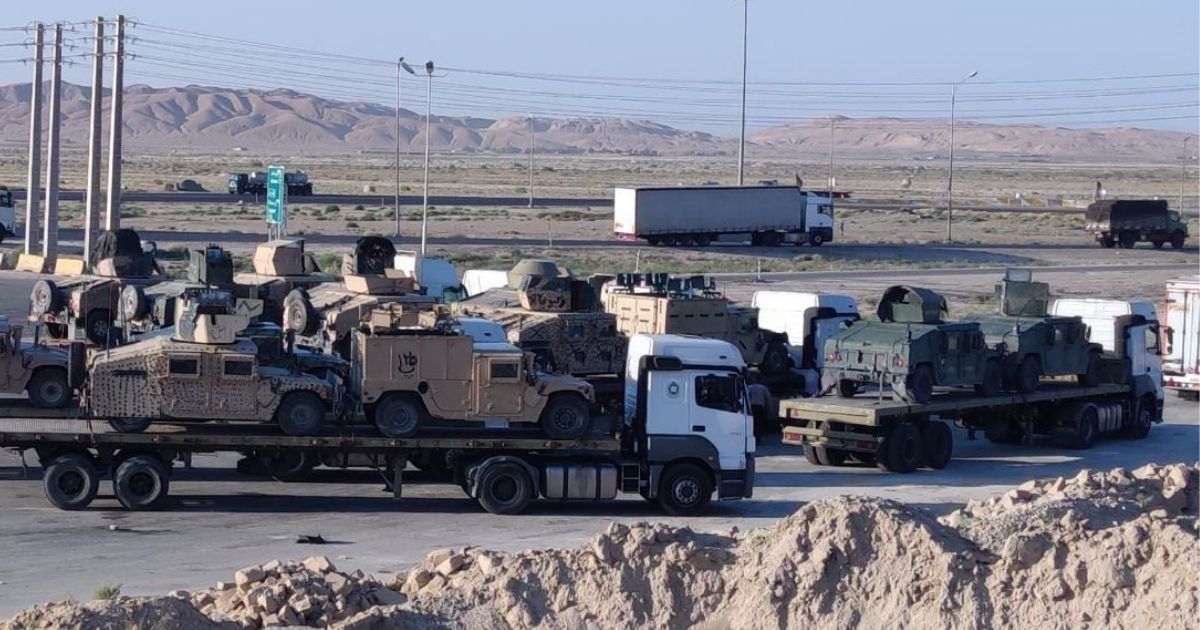 While Americans already know that a wealth of U.S. military equipment abandoned by the Biden administration had fallen into the hands of the Taliban, a new report suggests that an even worse enemy may have taken control of some of it.

The vehicles had allegedly belonged to Afghanistan’s army prior to the country being taken over by the Taliban, though Al Arabiya “could not independently verify the authenticity of those images shared on social media.”

Images shared on Twitter appeared to show Iranian army trucks transporting Humvees on a highway between Semnan and Garmsar, according to the Saudi outlet.

One Twitter user wrote in a translated post, “Transfer of American Humvees from Islamic Republic of Iran to Afghanistan to Iran * Location of photos: Semnan-Garmsar police station.”

The Biden administration has handled the Afghanistan withdrawal than anybody could have imagined. The withdrawal has included the deaths of 13 U.S. military personnel who were killed in a bombing by ISIS, American citizens still trapped in the country after our troop withdrawal and an untold amount of military equipment being left in the hands of the Taliban.

Gen. Kenneth McKenzie Jr., commander of U.S. Central Command, said this week that some of this equipment had been destroyed prior to U.S. troops leaving.

According to an official transcript of a Defense Department media briefing Monday, McKenzie said of the equipment, “We brought some of it out, and we demilitarized some of it.”

He went on to offer an example, saying the systems used to defend the Kabul airport from rocket attacks were kept in place until the last moment before troops left, when they were finally demilitarized.

McKenzie added that 73 aircraft left on the ramp at the airport were demilitarized and are unable to ever be flown again.

That being said, the amount of working U.S. military equipment that had already fallen into the Taliban’s possession when they swiftly took over Afghanistan has already been widely reported.

Additionally, retired military personnel have warned about what this means for the world and how other U.S. adversaries may be able to get this equipment from the Taliban in the future.

It appears that these warnings may have come true already.

It should be noted that Iranian officials have not confirmed or responded to the images, and the validity of the photographs has not been independently verified.

However, if these photographs turn out to be legitimate, this could be a destructive development for the free world.

If Iran has really gained access to U.S. equipment, the amount of knowledge and information it would be able to learn from them is frightening, to say the least. The country whose citizens routinely chant “death to America” would love nothing more than to use our technology to its own advantage.

Do you believe that the Taliban will trade U.S. military equipment with America's adversaries?
Yes: 0% (0 Votes)
No: 0% (0 Votes)

Iran has been considered a threat to the U.S. for some time now, but having access to our own advanced tech makes the nation a much more credible threat. It is all thanks to Biden’s poorly executed troop withdrawal from Afghanistan that makes this development even a possibility now.

If Iran has in fact successfully procured military equipment from the U.S., it leaves one to wonder: What did the Taliban get in exchange for the equipment? And what other nations might Iran share its newfound knowledge and access with?

While the answers to these questions are unknown at the moment, one thing is certain: Iran having access to American military equipment makes the entire world less safe.