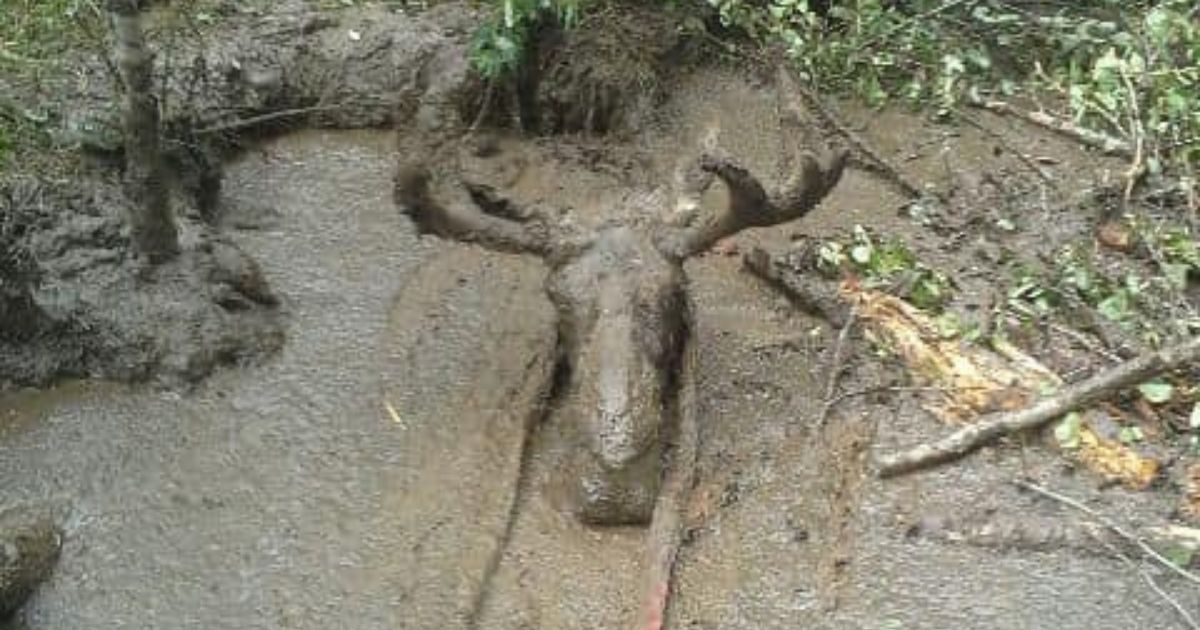 The following article, Men Spot Moose Stuck in Mud Up to Its Head, Tie Straps Around Antlers to Pull Animal to Safety, was first published on Flag And Cross.

If you ask the professionals what the best way for a person to approach and help a moose is, the answer is a simple “don’t.”

Given the sheer size and ferocity of the awkwardly proportioned beasts, it’s generally wise to give them a wide berth. But when some Canadians stumbled across a moose in pitifully dire straits last week, they weren’t about to let it die without a fight.

On Aug. 25, a man spotted a strange sight north of Timmons in Ontario: A mud-colored moose head jutting up from a massive mud pit.

He called two local friends and they came to assess the situation.

“It was about three or four miles from my home, so I thought it wouldn’t be much of a job to go over there and try and get him out,” Maurice Valliere, one of the two men, told CBC News.

The original finder, Valliere and the third man — Pat Greba — knew quite well how powerful the moose was, so they tried to contact the proper authorities for help.

They couldn’t make contact with the Ministry of Northern Development, Mines, Natural Resources and Forestry. According to a post by a friend who later shared their story, it wasn’t just a single quick attempt either — he said they tried for over an hour to go through the proper channel.

But at the end of that time, the moose was still just as stuck, and getting more tired by the minute. So Greba and Valliere threw together their own rescue using straps and Greba’s Argo ATV.

It was a good thing the moose was a bull, since his antlers gave his rescuers something to wrap the straps around. It was the only thing they could use since the rest of the animal was submerged.

“I was hoping to try to go around his stomach and try and get him out, but he was in too deep,” Valliere explained. “There’s no way I could have jumped in there, so the only option I had was to go around his horns.”

It was a success, and after resting for a moment on his side, the bull moose popped up and was off.

“He scared me so I ran away, and he was stuck with one of the straps hanging there [attached to one set of antlers],” Valliere said.

A friend shared the photos and story the next day.

“Thanks to my 2 prospector friends (Moe Valliere (Pictured) & Pat Greba ) this moose is back on the loose,” Bill Desloges wrote in an Aug. 26 Facebook post. “They worked hard to help rescue this moose from certain death.

“They were contacted by a friend (Helmer) about this situation. They tried contacting MNR for over an hour with no response. This took place 6 km down Hwy 655 and 2 km into the bush. Pat used his Argo to pull the big guy out. Way to go guys.”

As for NDMNRF, they said they have no record of contact about the incident (though Desloges posted a photo that suggests otherwise), and stressed that rescuing a moose in this sort of situation is dangerous.

“Rescuing a moose stuck in mud can be dangerous to responders and often the outcome for the moose is unsuccessful, especially if it has been stuck for some time leading to capture myopathy — muscle damage resulting from extreme exertion, struggle, or stress,” an email from the organization to CBC said.

While the men have received plenty of praise from other locals and readers, they brushed it off and said anyone in their shoes would’ve done the same.

“We didn’t think it was that much of a big deal because everyone in Timmins would have probably went out and helped,” Valliere said. “We all love our animals here.”

Continue reading: Men Spot Moose Stuck in Mud Up to Its Head, Tie Straps Around Antlers to Pull Animal to Safety ...