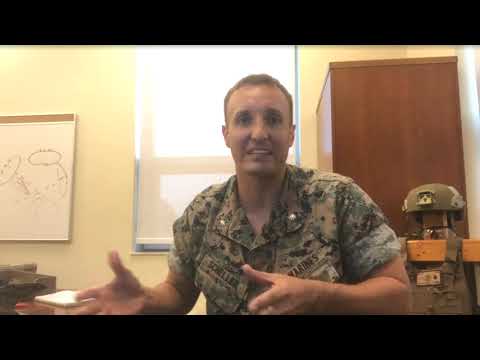 Lt. Col. Stuart Scheller, USMC, has become a viral hero among those outraged with how President Joe Biden withdrew from Afghanistan.

Scheller was relieved for cause, something he said he accepted. “My chain of command is doing exactly what I would do … if I were in their shoes,” he wrote on Facebook on Friday.

While he made several posts on social media in the aftermath of this indicating he was going to more vocal about his lack of faith in the U.S. military’s leadership when his discharge was completed, he didn’t plan any specific political or social commentary in the interim.

“I will not be making any statements other than what’s on my social platforms until I exit the Marine Corps,” he wrote in the Facebook post.

There was nothing in his statements to indicate Scheller was acting for reasons other than his personal convictions. His military superiors decided to order him to undergo a mental health screening anyway, according to a Facebook post by Scheller.

“When I went into work this morning, I was ordered by my commanding officer to go to the Hospital for a mental health screening,” Scheller wrote in a Monday Facebook post.

“I was evaluated by the mental health specialists and then sent on my way. My CO is a standup guy, and I understand why he did it, but it brings up a couple of important issues,” he added.

First among these, he wrote, was “excusing the actions of service members because of ‘PTSD.'” Scheller argued that this “does more damage to service members than any trauma in combat” and is “crippling them by failing to hold them accountable.”

Second, however, was his issue with military leadership and how it handled mental health in comparison to COVID-19.

Scheller wrote that “accountability from senior leaders would alleviate feelings of guilt or shame in service members more than individual counseling. It would save thousands of lives.”

“On May 6th Secretary of Defense Lloyd Austin said, ‘the most immediate threat [to the DoD] is COVID.’ According to the 2020 National Veteran Suicide Prevention Annual Report the number of Veteran suicide deaths documented in 2018 was well over 6K,” Scheller wrote. “And the numbers continue to rise.

“From a statistical perspective, it’s pretty easy to argue that COVID isn’t the biggest threat,” he added.

Finally, he assured his supporters that, “I’m not going anywhere.”

“Everyone is scared that the weight of the system is crashing down on me. But I know something you don’t… it’s the system that’s going to break. Not me,” Scheller wrote.

“I am moving forward with my resignation. I, like many of you, am very scared. But courage isn’t the absence of fear, it’s the ability to overcome it. At the end of the day, if I stand with accountability and integrity, the system can’t beat me.”

Scheller’s ouster came after a four-minute video that went viral — if just because, as Donald Trump Jr. noted in a tweet, “The woke generals can troll Tucker Carlson on twitter and pontificate about “white rage” in front of Congress, but simply asking for accountability for their deadly mistakes…gets you fired.”

The woke generals can troll Tucker Carlson on twitter and pontificate about “white rage” in front of Congress, but simply asking for accountability for their deadly mistakes…gets you fired.

The full video is here:

“People are upset because their senior leaders let them down and none of them are raising their hands and accepting accountability or saying, ‘We messed this up,'” Scheller said in the video.

He added that the defense secretary, Joint Chiefs chairman and Marine commandant “are supposed to advise” the president and the administration.

“I’m not saying we’ve got to be in Afghanistan forever,” Scheller said. “But I am saying, did any of you throw your rank on the table and say, ‘Hey, it’s a bad idea to evacuate Bagram Airfield, a strategic airbase, before we evacuate everyone’? Did anyone do that? And when you didn’t think to do that, did anyone raise their hand and say, ‘We completely messed this up’?”

According to CNN, Marine Corps spokesman Maj. Jim Stenger issued a statement saying Scheller was relieved of his command “due to a loss of trust and confidence in his ability to command.”

Yet, as Scheller said, he expected to be relieved. It’s what he would have done were he in his superiors’ position, in his own words. He seemed to be preparing for a life outside the Marine Corps — possibly as an activist of some kind.

Unless there’s something we’re missing here, none of this is a reason for a forced mental health examination. He was certainly deemed to be mentally competent enough to lead before the video was posted.

Yes, Scheller may have been willing to risk more than the average service member to demand accountability for what happened in Afghanistan; he knew he was putting a 17-year career in the Corps on the line.

That’s not crazy, it’s courage. It may not be courage you agree with, either from a political or pragmatic standpoint, but it’s courage.

If these statements are the only reason Scheller is undergoing a compulsory psychiatric evaluation on his way out of the military, it’s hard not to conclude it was a step aimed not at helping the lieutenant colonel, but at humiliating him, and discrediting him down the line.

It’s also a slap in the face to Scheller and his personal convictions, and every American — in or out of uniform — who agrees with him.