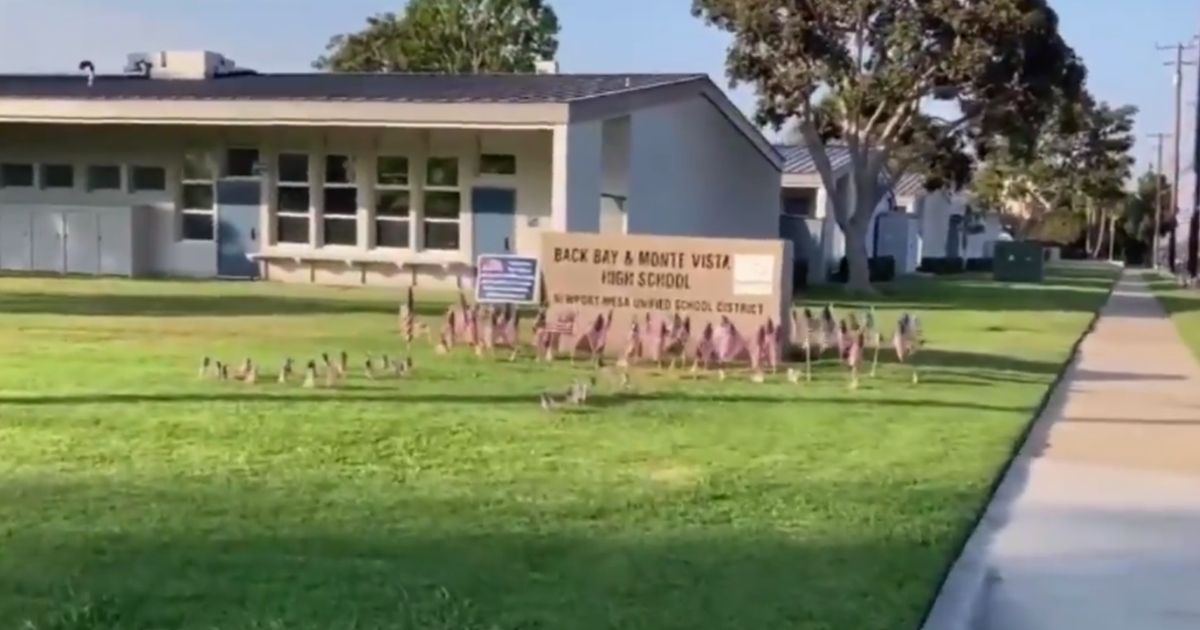 The following article, Teacher Who Rejected US Flag Faces Fury as Parents Roll Up to School Grounds with Red, White and Blue, was first published on Flag And Cross.

It doesn’t happen too often, but parents have a reason to be hopeful about the future of public education this week.

Radical leftist teacher Kristin Pitzen was removed from the classroom and a community has come together in an outpouring of patriotic support after parents learned that she told a student to pledge allegiance to the LGBT rainbow flag — and shockingly, it happened in Orange County, California.

A video posted by the Back Bay High School teacher explaining how she came to offer the shocking alternative to Old Glory went viral, giving parents a window into the subversive happenings in her classroom, according to the Los Angeles Times.

In the clip, Pitzen, who seemed to be stifling a laugh throughout, recounted how she had removed the American flag because it made her “uncomfortable.”

When a student asked her what to do during the school’s daily recitation of the Pledge of Allegiance without the Stars and Stripes, she directed him to the rainbow flag she hung in her classroom.

“My kid today goes, ‘Hey, it’s kind of weird that we just stand and we say it to nothing.’ And I’m like, ‘Oh well, I gotta find it. I’m working on it. I got you,’” she explained, though she laughed and signaled that she really had no such intention.

“In the meantime, I tell this kid, ‘We do have a flag in the class that you can pledge your allegiance to,'” Pitzen continued.

“And he like, looks around and goes, ‘Oh, that one?’” the teacher said beaming before turning her camera to the multicolored celebration of sin hanging in the corner.

Teacher mocks the American Flag and suggests to students they can say the Pledge of Allegiance to the pride flag: pic.twitter.com/1QTS5xjPln

After the Libs of Tik Tok account posted the video Friday, Pitzen quickly tried to scrub her social media of that post and others like it, but it was too late for the teacher.

By Saturday, the Newport-Mesa Unified School District had promised that it was “investigating and addressing it” in its own tweet.

“A personal post by a teacher about the American flag is causing alarm/concern,” the official account for the district stated.

“Respecting our flag is a value we instill in students and is an expectation of our staff. We take this matter with extreme seriousness and are investigating and addressing it.”

A personal post by a teacher about the American flag is causing alarm/concern. Respecting our flag is a value we instill in students and is an expectation of our staff. We take this matter with extreme seriousness and are investigating and addressing it.

Officials made the call Monday to have Pitzen removed, though it isn’t clear if she’s lost her job completely or simply is not teaching at this time.

“Showing respect for our nation’s flag is an important value that we instill in our students and an expectation of our employees,” a statement from the district’s account said.

“The teacher is no longer in the classroom.”

Members of the community soon showed their support for the patriotic symbol by decorating the area around the school with small American flags stuck into the ground and even a couple of similarly sized rainbow flags as well.

“Back Bay High School, where Kristin Pitzen worked, was decorated in American flags by community members. Patriots,” Libs of Tik Tok posted seemingly in a follow-up to the story it helped break.

One mother and school district alumna, Stephanie Cox, said a small crowd gathered nearby Monday to wave a giant American flag while passing cars honked their horns to show support.

“I saw it as I was coming by, so I got in the turn lane and honked and said, ‘Thank you for doing that,’” Cox said.

The mother also told the Times that while she supports the LGBT agenda, she doesn’t feel it has a place of prominence over the nation’s symbol.

“I’m in full support of the Pride community, but I don’t compare the Pride flag to the American flag — they’re apples and oranges,” Cox explained.

“Have the Pride flag, but we’re not saying the Pledge of Allegiance to it. That’s for the flag of the United States of America,” she added.

Another woman who is also a product of the school district with kids of her own now attending expressed outrage at Pitzen’s actions.

“We live in a free country, so people can do what they want, but they should be respectful of others,” Julieanne Papa said.

“It’s like they’re pushing their own agenda on these kids, and it’s their personal view, nothing they should be teaching in school,” she said.

These stories about radical teachers and their agendas rarely have a satisfying ending, but this one seems to be the exception.

The teacher’s tone in the video demonstrated that she was proud of the subversive nature of the message she gave the student, and her use of social media suggests she had no fear of getting caught.

These educators, many of whom enjoy the iron-clad job security that comes from their teachers unions, use their bully pulpits in the classroom to churn out the next generation of Marxists.

They seem to have little regard for the traditions, ideas and ideals that have shaped this country — and they seem to care even less for the wishes of the parents.

The fact that this community not only got this woman removed from the classroom but also had community support for the very symbol she found so distasteful and divisive is an encouraging sign.

If solid, patriotic Americans are the silent majority so many on the right have promised (hoped?) they are, maybe Pitzen and her ilk have finally awoken the sleeping giant.

Continue reading: Teacher Who Rejected US Flag Faces Fury as Parents Roll Up to School Grounds with Red, White and Blue ...