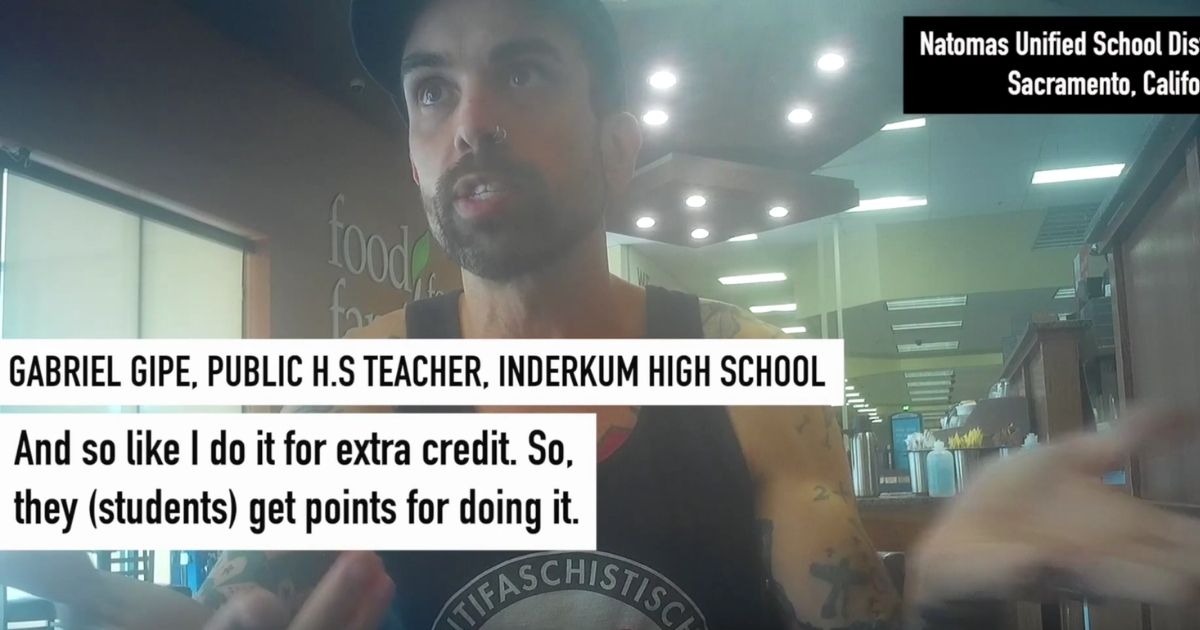 The following article, Teacher Busted in Undercover Video Set to Be Fired After Superintendent's Decisive Action, was first published on Flag And Cross.

A California school district has kicked a teacher into limbo and said it will fire him after the teacher was caught on video saying he used his class to indoctrinate students in far-left beliefs.

The school district’s superintendent, Chris Evans, did not name the teacher but outlined the district’s response to the video.

“In this video, a teacher at Inderkum High School was recorded sharing his educational approach that is disturbing and undermines the public’s trust,” Evans wrote in a message on the district’s website.

“As of today, this teacher was placed on paid leave because of his actions and choices in the classroom. Natomas Unified will be taking the legally required next steps to place the teacher on unpaid leave and fire the teacher,” he wrote.

The video captured Gipe saying that his students were the raw material of what he would make into radical extremists.

Project Veritas founder James O’Keefe said the video was recorded in a café, according to Newsweek.

“Someone inside the school gave us the photos and we sent an undercover journalist to corroborate at a coffee shop a few miles from the school. Gabriel Gipe thought he was talking to a parent,” O’Keefe said.

“I have 180 days to turn them into revolutionaries … Scare the f*** out of them,” Gipe said in the video.

“I post a calendar every week … I’ve had students show up for protests, community events, tabling, food distribution, all sorts of things … When they go, they take pictures, write up a reflection — that’s their extra credit,” he said.

The video shows Gipe boasting of how he pushes students to the left.

In the video, Gipe talks about his affection for violent revolution and his desire to undercut the capitalist foundations of America.

“Like, why aren’t people just taking up arms? Like why can’t we, you know — take up arms against the state? We have historical examples of that happening, and them getting crushed and being martyrs for a cause and it’s like — okay well, it’s slow going because it takes a massive amount of organization,” Gipe said.

“What can we do now to root out this culture that keeps perpetuating hyper-individualism, hyper-competitiveness, capitalist exploitation and consolidation of wealth,” he said, praising the work of the Chinese Communist Party.

Although the school district said only Gipe was punished, he said he is not alone in his philosophy.

“There are three other teachers in my department that I did my credential program with — and they’re rad. They’re great people. They’re definitely on the same page,” he said.