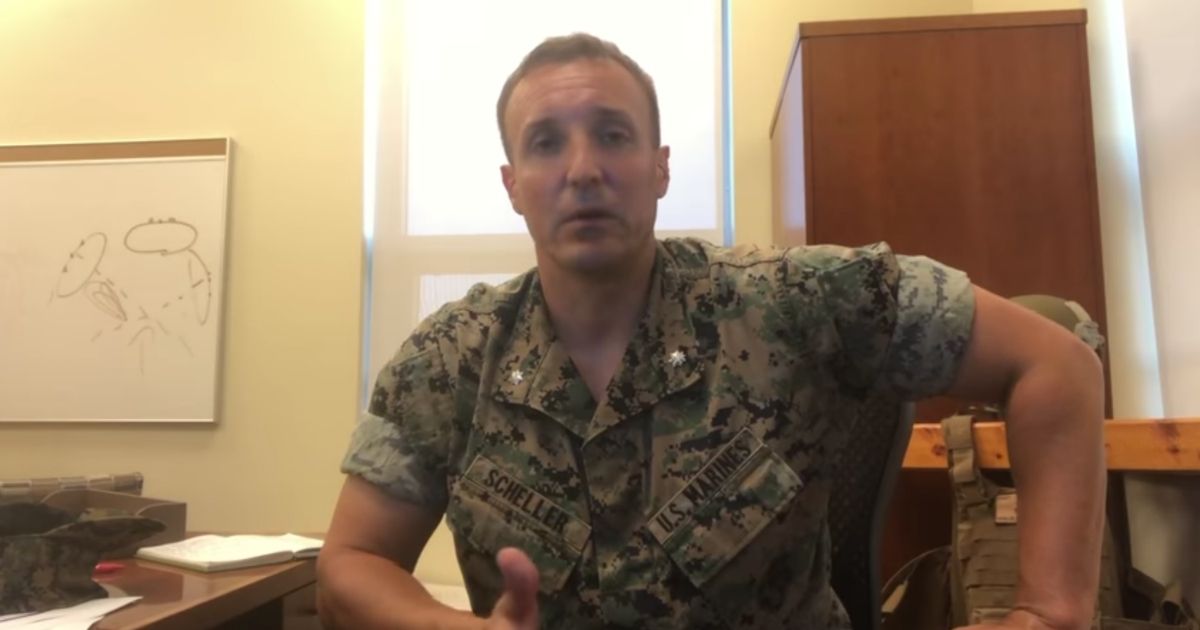 The following article, Marine Officer Sends Resignation Letter, Cites 'Loss of Trust and Confidence' in Leadership, was first published on Flag And Cross.

Lt. Col. Stuart Scheller requested Sept. 11, 2021, as his withdrawal date from the U.S. Marine Corps in the formal resignation he submitted Tuesday.

Scheller, relieved of command last week for his Facebook rant critical of senior military leadership, returned to social media to make the letter public. On Facebook and LinkedIn, he addressed his posts to “The American Leadership” along with a copy of the letter citing “loss of trust and confidence” in his superiors’ ability to lead as his reason for leaving.

The wording mimics how the Marine Corps justified firing him. According to CNN, Marine Corps Spokesperson Major Jim Stenger said in a statement on Friday that Scheller was relieved of his command due to the “loss of trust and confidence in his ability to command.”

There he credited his decision to resign to a former mentor, retired Marine Col. Thomas K. Hobbs, who Scheller said he loves “like a father” but who had left a comment on one of his LinkedIn posts that “just played through my head.”

“If Stuart Scheller was honorable, he would resign his commission,” Scheller said Hobbs wrote.

Scheller emphasized at the time that the Marine Corps was not seeking any legal or administrative action against him other than his relief for cause. “I think the plan was to hide me away for three years,” he said.

Having served 17 years, Scheller could have chosen to “remain silent” and ride out his remaining time until he hit his 20-year mark where he would collect his military retirement and VA disability benefits. “But I don’t think that’s the path I’m on,” he said.

Scheller filmed the original video that went viral the same day that 13 service members were killed along with over 200 civilian and military casualties. He had been serving as the commander of the Advanced Infantry Training Battalion at Camp Lejeune, North Carolina. He made the video while in uniform and lost his command the next day.

“There is a forum in which Marine leaders can address their disagreements with the chain of command, but it’s not social media,” Stenger said in a statement to the media, including CNN, The Hill and the independent military news outlet, Stars and Stripes.

Marine leaders can address their disagreements with the chain of command through proper channels, not social media, said Maj. Jim Stenger, a Marine Corps spokesman, in an emailed statement confirming that Lt. Col. Stu Scheller had been relieved.https://t.co/n0Rs2Bv45u

The Marine Corps updated its social media policy this year. As a mid-level leader, he would have been familiar with the military’s expectations of uniformed personnel voicing personal opinions publicly.

Despite his violation of the policy, many veterans expressed their support of Scheller’s actions over the past five days including Dan Crenshaw, a former Navy SEAL.

This guy is all class. He knew what the consequences would be. His concerns are not wrong. Many people feeling the same lack of accountability. When the dust settles that accountability must happen. https://t.co/bpA79F4Fdi

Scheller posted an update on his Facebook page on Wednesday, noting that he now believes the Marine Corps will assign an investigating officer to his case. If the officer recommends the case go to court-martial, Scheller could face prison time.

“If it does go to court martial, I will be found guilty, and will probably do some jail time. This will provide me a valuable opportunity to read, write, and contemplate,” he wrote.

“But as stated in the beginning, I plan for this to be my final post concerning my legal struggles with the Marine Corps. Continuing to squabble with the organization I love so dearly doesn’t do either of us any benefit.”