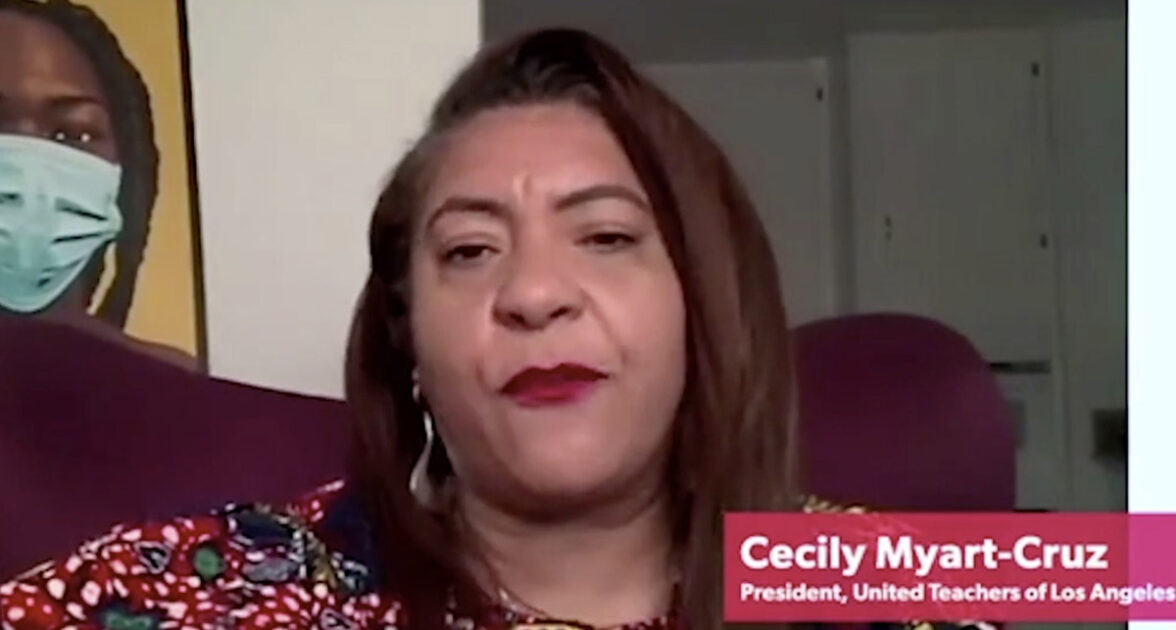 Cecily Myart Cruz, the head of the United Teachers Los Angeles union, has caused outrage after saying that it is more important for kids to learn left-wing activism than it is to learn reading, writing, and arithmetic.

The union strongarm was outed in an article last week by writer Jason McGahan in L.A. Magazine.

The dangerous, ultra-woke union chief represents 33,000 teachers from the L.A. Unified School District. But she is also a rabid, anti-American, leftist loon. And as far as she is concerned the U.. is something that need to be torn down so it can be rebuilt in her left-wing model.

Myart Cruz insists that using kids to further he pogrom is perfectly fine and it doesn’t matter if they don’t learn anything but a mindless obedience to the left-wing agenda.

Here are just a few out the outrageous quotes from this propagandist:

This is the sort of monster running every school in America. Don’t be fooled that this stuff is only in “other people’s” schools.

Anti-Americans like this infest your schools, too. Whoever you are, wherever you live — yes, even in conservative areas — your local schools are infested with these dangerous propagandists.

Yes, it’s more important to teach them to be good little leftist (blm/antifa) RIOTERS instead of teaching them HOW to think for themselves and how to FUNCTION as USEFUL U. S. Citizens! That’s why READING, math, CIVICS and science are important!

Way past time to pull your children out of the public INDOCTRINATION CENTERS and home school them.

How is this allowed to continue? Do people not pay school taxes?

There is something wrong with this guy’s head

LA Teachers Union Boss Says Learning Left-Wing Activism More Important than Math, Science, and Reading. Parents remember your children won’t need Math or Science, the Communist Government will decide what jobs your children will be allowed to do!

This woman is ugly to the core and shouldn’t be within close proximity to any school much less the head of a teachers union.