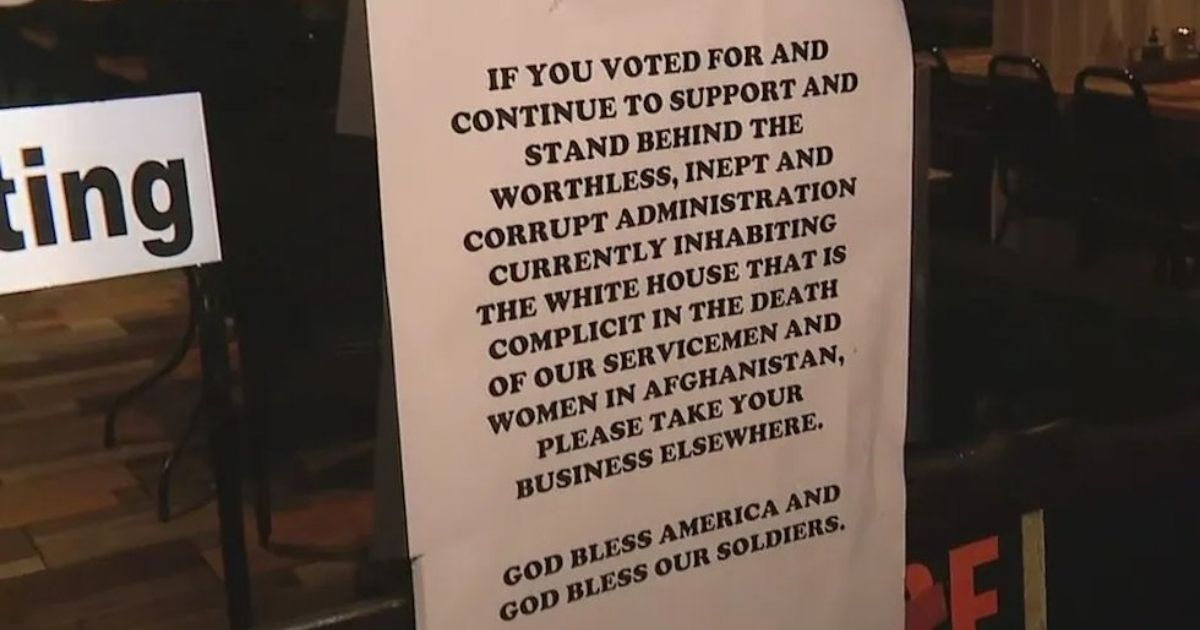 A Florida restaurant is garnering attention after the owner posted a message to supporters of President Joe Biden on the front door, encouraging them to take their business elsewhere.

The message outside of DeBary Diner in DeBary, Florida, points to the disastrous withdrawal of U.S. troops from Afghanistan, WOFL-TV reported.

Thirteen U.S. service members were killed in a suicide attack at the Kabul airport last week as troops were attempting to evacuate citizens stranded in the country.

“If you voted for and continue to support and stand behind the worthless, inept and corrupt administration currently inhabiting the White House that is complicit in the death of our servicemen and women in Afghanistan, please take your business elsewhere,” the sign reads.

Angie Ugarte, the owner of the diner, told WOFL it was the “only thing” she felt she could do to express her frustration. The sign was posted the day the service members were killed.

“I was just angry. I was just let down. I felt like one of those mothers, or wives, or sisters who were gonna get that knock on the door,” Ugarte said.

Ugarte said many of her customers are veterans and that an entire wall of the diner is dedicated to military service members.

She blamed Biden for the deaths of the service members in Afghanistan.

“If you really, really still stand behind what’s allowed this to happen and the way it happened — which was unnecessary — then I really don’t want to be associated with you in any way and I certainly don’t want your business,” Ugarte said.

Ugarte said the sign has been met with mixed reactions, from people simply turning around and walking away to praising the message.

She said the sign would remain up “as long as it takes,” WOFL reported.

Approximately 250 Americans were still trapped in the country after the Aug. 31 troop withdrawal deadline. That number includes 24 California students.

The Biden administration has downplayed the severity of the crisis, with Pentagon press secretary John Kirby stating that Americans get stranded in foreign countries “all the time” and White House press secretary Jen Psaki claiming it was “irresponsible” to say that citizens were stranded in Afghanistan.

One retired Navy aviator is working on independent evacuations from Afghanistan, arguing that the claims of the Biden administration are “false” and that Americans are being “left behind.”

Several Republican lawmakers have called for Biden to be removed from office over the Afghanistan crisis, with Georgia Rep. Marjorie Taylor Green introducing articles of impeachment last month.

Public opinion on the withdrawal rapidly soured in the wake of the Taliban takeover, with Biden’s approval ratings sinking and calls for his resignation trending on Twitter.