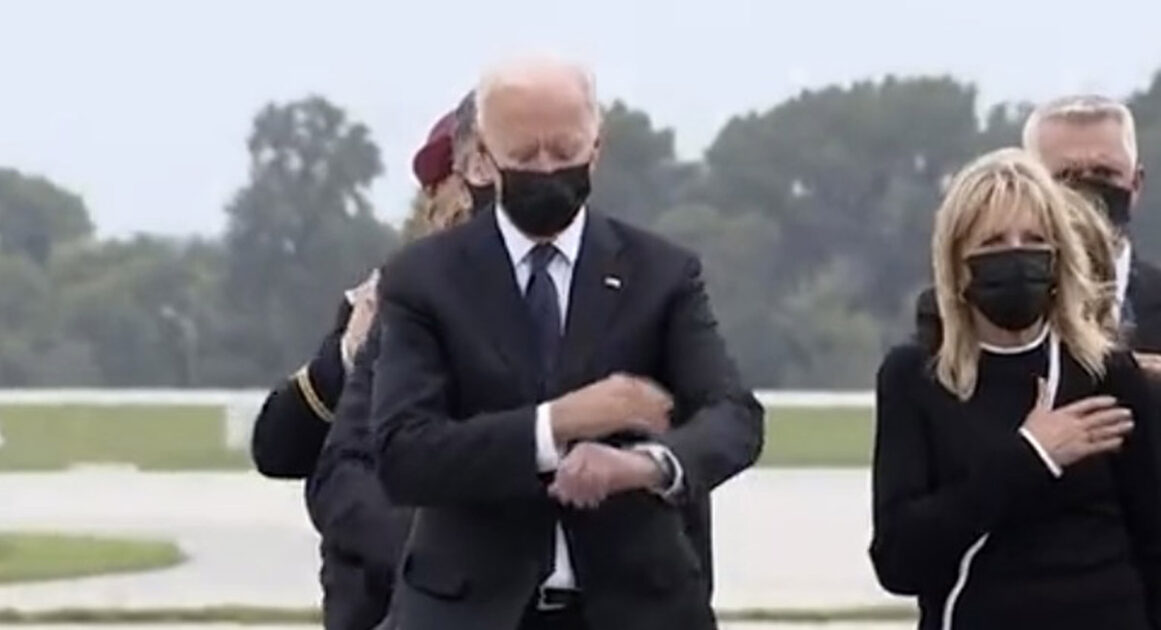 The following article, Pregnant Widow of Slain Marine Says Biden Had ‘Total Disregard’ for the Fallen at Meeting, Rambled About His Own Son, Instead, was first published on Flag And Cross.

The pregnant widow of a Marine killed in Afghanistan due to Biden’s disastrous pullout says that she left her meeting with the president disgusted that he talked about his son and seemed to have a “total disregard” for the soldiers who died due to his policies.

The family of Marine Corps Lance Cpl. Rylee McCollum were so disgusted with Biden’s presence, all of them but one left the meeting at Dover Air Force Base on Sunday. Only the fallen Marine’s pregnant young wife Jiennah stayed to officially meet Biden, and when she did she as thoroughly offended.

Jiennah said that as she sat in the meeting while Biden rambled on, she felt he had no idea what the families were going through. Worse, he inappropriately brought up his son Beau, and delivered an off topic story about the man that had no bearing on what the president had done in Afghanistan, and had no bearing on the fallen service members to whom he was supposed to be there to pay homage.

Mrs. McCollum said Joe sounded disjointed and offered a “scripted and shallow” response to the families.

One of McCollum’s sisters, Roice, said she and her sister and her father joined McCollum’s wife, Jiennah McCollum, on the trip. But when it came time to meet with the president, they left the room, because she said they did not want to speak with the man they held responsible for McCollum’s death.

Only Jiennah, who is expecting the couple’s child next month, stayed. But she left disappointed, Roice said. The president brought up his son, Beau, according to her account, describing his son’s military service and subsequent death from cancer. It struck the family as scripted and shallow, a conversation that lasted only a couple of minutes in “total disregard to the loss of our Marine,” Roice said.

“You can’t f— up as bad as he did and say you’re sorry,” Roice said of the president. “This did not need to happen, and every life is on his hands.”

The White House declined to comment on the private conversations Biden had with families.

Indeed, several of the families didn’t even want Biden present as their loved ones came home for the last time.

Worse, Biden was seen looking bored and checking his watch during the somber ceremony.

ABHORRENT: What kind of degenerate "president" would look at his watch during a ceremony honoring the 13 dead heroes who died due to Joe Biden's Afghanistan disaster? pic.twitter.com/JlPQdQKzJP

Continue reading: Pregnant Widow of Slain Marine Says Biden Had ‘Total Disregard’ for the Fallen at Meeting, Rambled About His Own Son, Instead ...