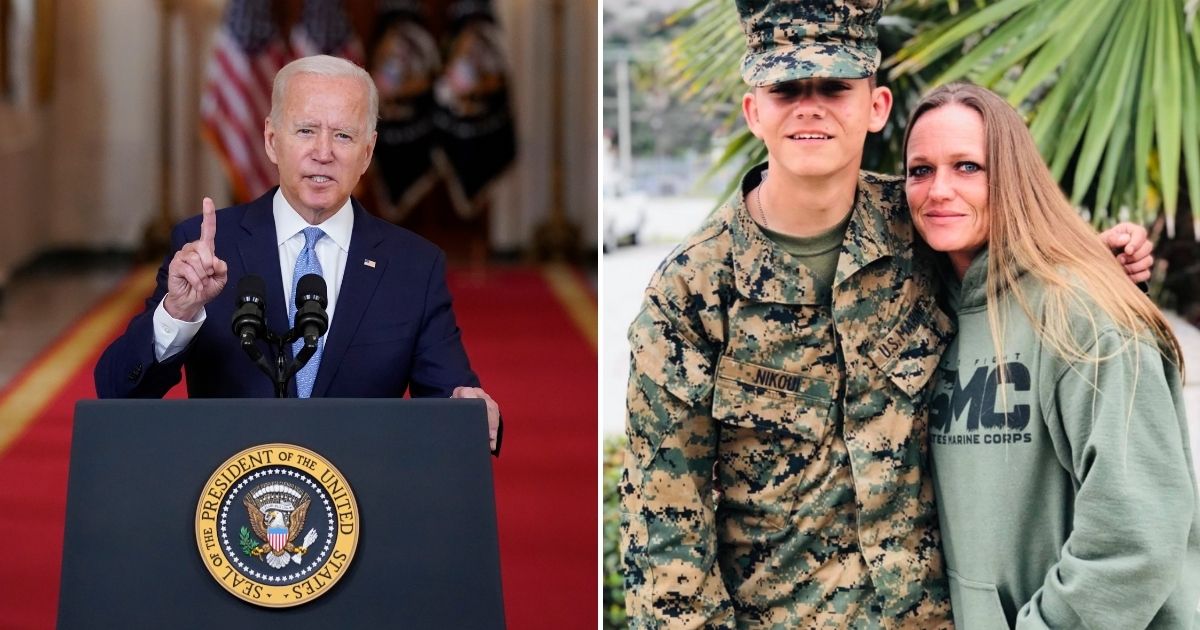 The following article, Gold Star Mom Goes Scorched Earth on Biden Over His Behavior: He 'Rolled' His 'F***ing Eyes', was first published on Flag And Cross.

Last week, the disastrous withdrawal from Afghanistan led by President Joe Biden resulted in the deaths of over a dozen U.S. servicemen and women.

Since then, the president has come face to face with many of the families of those fallen soldiers.

These meetings haven’t gone well for the president.

Still grieving over the loss of their loved ones in Afghanistan, many of the families have gone on to decry Biden, claiming that all he had to offer were empty words, disrespect and a total lack of accountability.

Shana Chappell was one of the parents who had a chance to meet Biden, which she said happened Sunday.

Chappell was the mother of U.S. Marine Lance Cpl. Kareem Mae’Lee Grant Kikoui, who was killed in Kabul on Thursday during a suicide bombing.

In a Facebook post addressed to Joe Biden on Monday, Chappell made it known that she was less than impressed with the president’s personal condolences.

“This msg is for you! I know my face is etched into your brain! I was able to look you straight in the eyes yesterday and have words with you. After i lay my son to rest you will be seeing me again!” Chappell wrote.

According to Chappell, Biden “tried to interrupt” her by giving his own “sob story.”

“Remember i am the one who stood 5 inches from your face and was letting you know i would never get to hug my son again, hear his laugh and then you tried to interrupt me and give me your own sob story and i had to tell you ‘that this isn’t about you so don’t make it about you!!!'” she wrote.

This falls in line with reports that Biden had been trying to relate to the Gold Star families by detailing his experience dealing with the loss of his son Beau to cancer.

While the loss of Beau Biden was tragic, comparing his death to the deaths of the fallen service members in Afghanistan is utterly ridiculous, as Caleb Hull of IJR explained quite cleverly in a satirical tweet Tuesday.

“I understand your son was blown to a million pieces by ISIS because I’m incompetent, but let me tell you how my son dying from cancer is basically the same thing and how you should feel bad for me.”

Chappell went on to say that Biden then “rolled” his eyes at her.

“Btw as my son and the rest of our fallen Heros were being taken off the plane yesterday i watched you disrespect us all 5 different times by checking your watch!!! What the f*** was so important that you had to keep looking at your watch???? You are nobody special Biden!!! America Hates you!!!!!”

In yet another example of the president showing disrespect to the families of the fallen soldiers, Biden snapped at one of the Gold Star parents.

On Sunday, Mark Schmitz — the father of 20-year-old Lance Cpl. Jared Schmitz, who died in last week’s explosions — forced Biden to look at a picture of his son, saying, “Don’t you ever forget that name.”

Biden “did not seem to like that,” according to The Washington Post, and snapped back at Schmitz by saying, “I do know their stories.”

These Gold Star families continue to make one thing very clear: If Biden won’t take responsibility on his own, they’re going to make him.