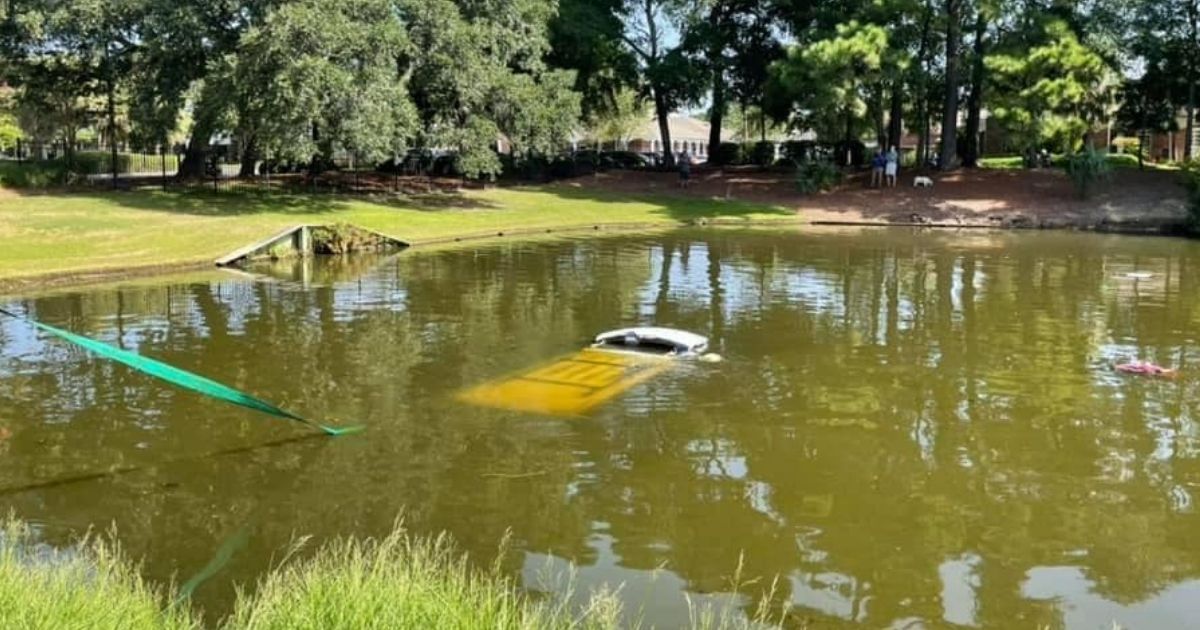 The following article, After Car Flies Off Road Into Pond, Trooper Jumps In to Save Man and Dog from Drowning, was first published on Flag And Cross.

L/Cpl. Adam J. Marshall has been a trooper with the South Carolina Highway Patrol since June 2015. He transferred to Troop 5 in the Grand Strand area in September 2019 — a fact that at least one man and dog are now grateful for.

On Sunday, Marshall was near Pawleys Island when a call came in about a man and dog who were trapped in their car after the man drove into a pond.

Since the trooper was only a little over a mile away, he rushed to the scene to find the car almost completely submerged.

The only window visible and accessible above the waterline was the back window, so Marshall jumped in and immediately started working to free the two occupants.

“He broke out the back window, which was the only part of the vehicle not completely underwater, but was unable to locate the driver and was unable to free him through the driver’s side door,” the South Carolina Department of Public Safety shared on Monday.

Midway Fire Rescue then appeared on scene and helped Marshall get the driver out through the passenger side door. During the commotion, the dog was able to escape the vehicle and get to shore.

“Midway Fire and EMS treated the man on shore and then, transported him to the hospital for further treatment,” the post continued. “We are so pleased to learn that the driver is expected to make a full recovery and his dog safely made it to shore during the rescue.

“Great job to L/Cpl. A.J. Marshall and those first responders from Midway Fire Rescue for your heroic acts and outstanding teamwork.”

According to a tweet by Midway Fire and Rescue, good Samaritans on-site assisted with the rescue, as well.

@MidwayFireResQ #COMMENDS @SCHP_Troop5 Trooper, Good Samaritans, and MFR Crews for Heroic Life Save. Trooper & citizens were in the pond when we arrived, MFR Crew was able to reach submerged vehicle and use tools & training to extricate driver & dog. THANKS Trooper, Citizens, FFs pic.twitter.com/LZjszp1Dim

On that tweet, a man who identified himself as the victim’s son commented to thank all involved.

“Hi, Im Jacob, Danas son, who was in the car,” he wrote. “I just wanted to thank every single person that was involved in the incident … Im astonished with the fearlessness of the trooper and anyone who was there … If theres any way i can contact him let me know. You guys are awesome.”

Marshall’s bravery and readiness to risk his life to save another have been recognized by multiple agencies. One towing company seemed to speak for many in its lavish praise of the young trooper, based on the number of people who commented to agree.

“He is a true HERO and genuinely cares about his community. I am blessed to know him!! He is one of the BEST!!”

Continue reading: After Car Flies Off Road Into Pond, Trooper Jumps In to Save Man and Dog from Drowning ...

Kudos to all who helped save this man’s life.