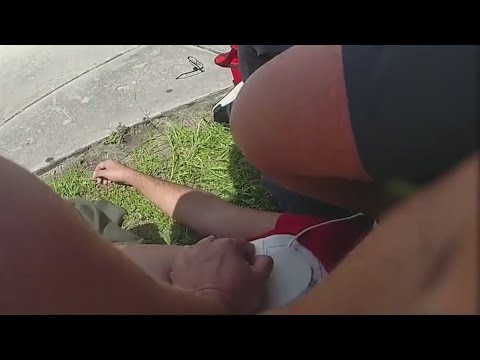 The following article, When Student Collapses Into Cardiac Arrest at School, Nurse and Resource Deputy Race to Save His Life, was first published on Flag And Cross.

On Aug. 17, at around 3 p.m., a student at Wharton High School in Tampa, Florida, collapsed. He appeared to be breathing — but in all reality, he was experiencing cardiac arrest.

School nurse Alicia Robertson was walking across campus when a call came in that a student had collapsed. She immediately ran to him and started checking him out.

“I turned him over and assessed him and, and realized that his pulse was weak and thready,” she said, according to KKTV-TV.

School Resource Deputy William Mellana joined Robertson after calling for more backup. They were giving the student CPR, but they knew, based on his condition, he was going to need more than that.

“He was out. He was done. And that’s what the (automated external defibrillator) told us.”

They used the AED — the first time either hero had used the school’s device — and continued CPR. While it lasted only minutes until EMS got there, Mellana said “it felt like an eternity.”

Thankfully, their efforts worked. After some medical attention, the student was back at school and doing well.

But what happened will stick with Mellana and Robertson for a long time, as it has stuck with those closest to them and the student. Both law enforcement and the school district have since recognized the two heroes.

“Deputy Mellana’s actions are a shining example of the heroism and composure under pressure that law enforcement officers must display every day,” Sheriff Chad Chronister said.

“We are incredibly grateful that the first-aid training each of our deputies receives was able to help this young man make it back home to his family.”

“We want to thank both Deputy William Mellana and school nurse Alicia Robertson for their heroic actions at Wharton High School as a student was suffering a serious medical episode,” Hillsborough County Public Schools shared on Facebook.

“Ms. Robinson began CPR on a student who collapsed and was not breathing when she called Deputy Mellana, who deployed an AED device and continued aid until EMS arrived. Both of their actions saved this student’s life. We could not be more proud and thankful to have these two incredible people at Wharton High School to protect our students and staff. We appreciate you!”

While this was a scary episode, it was proof for parents sending their kids to Wharton High that their kids are in good hands — something every parent loves to know.

Continue reading: When Student Collapses Into Cardiac Arrest at School, Nurse and Resource Deputy Race to Save His Life ...