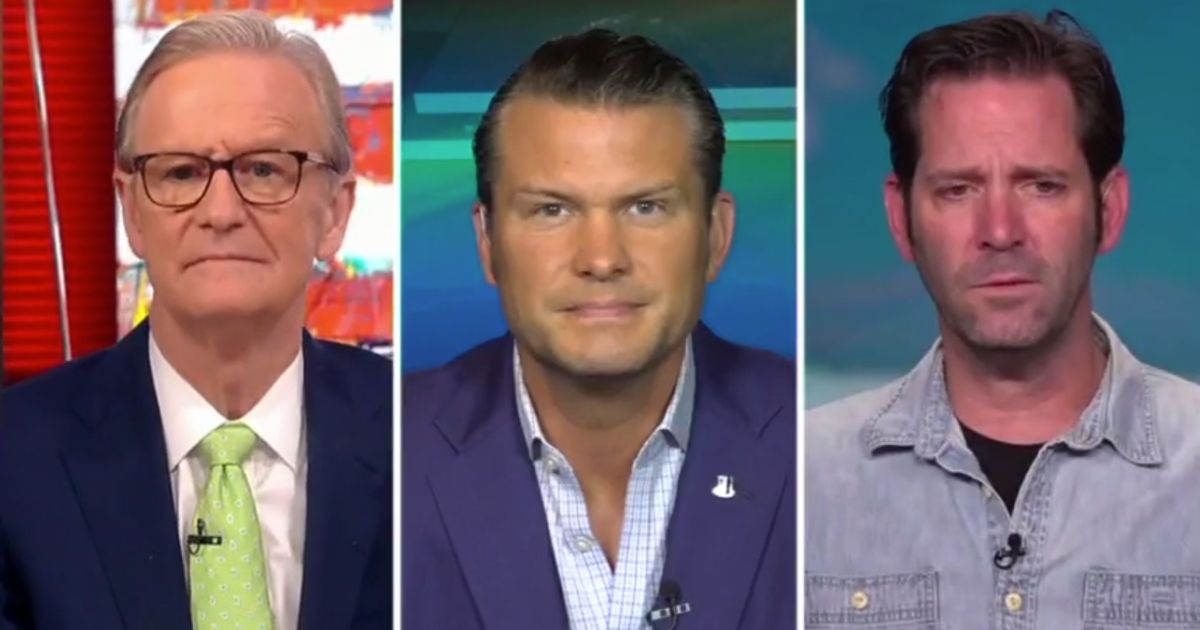 The following article, Navy Veteran Working on Kabul Evacuation: Biden Admin's Claims Are 'False,' Americans 'Are Being Left Behind', was first published on Flag And Cross.

A Navy aviator helping Afghan-Americans evacuate Afghanistan contradicted the Biden administration’s claims, saying that citizens trying to leave via the airport had been denied entry by Taliban officials.

Retired Navy aviator Brett Odom appeared on “Fox & Friends” Monday to discuss his efforts to evacuate stranded citizens from the city of Kabul. He also hit back against the Biden administration’s denial of citizens being turned away.

The interview came hours after multiple rockets were launched at Kabul’s airport but were intercepted by U.S. missile defense systems within the country.

Odom began the interview by detailing his efforts the previous night to rescue a family who had been trying to reach the airport gates.

“I worked for a family last night for about eight hours … They had been trying to get into the back gate, the south gate. It was the only one open yesterday,” Odom told Fox, adding that all the other gates were “welded shut.”

“We had them moving through the checkpoints. … They could not get into the gate. The gates were closed,” Odom said. “We could not get them through last night.”

“We are telling them to scream that ‘I’m an American. I need to get on this airplane.’ And no one let them. And you know, we heard that went all the way up to the top of the military leadership.”

Odom said that his contact with the family was a “heroic effort,” and that “informal networks of people” were popping up to help citizens leave the country.

He had previously authored an Op-Ed for USA Today in which he wrote that veterans were “ashamed” at the administration’s “ugly retreat” from Afghanistan.

If you know a veteran, reach out. Many of us are hurting right now, writes Brett G. Odom. https://t.co/jYJi0lB4Ya

In his Fox interview, the retired Navy aviator commented on a tweet from Ross Wilson, the U.S. ambassador to Afghanistan, who denied reports of citizens being turned away from the airport by Embassy staff and U.S. forces.

“Claims that American citizens have been turned away or denied access to HKIA by Embassy staff or US Forces are false,” Wilson wrote.

This is a high-risk operation. Claims that American citizens have been turned away or denied access to HKIA by Embassy staff or US Forces are false.

“As of about 3:00 Eastern time this morning, it was definitely false,” Odom said, adding that a family of four outside the gate was not allowed in the base. “So there is Americans who are being left behind.”

Odom argued the statement was false since the Taliban were not letting people into the airport.

Lawmakers have expressed anger and frustration toward the Biden administration, with Republican Texas Rep. Ronny Jackson, a former White House physician, tweeting that he was “furious” that the State Department would not help them.

They have been beaten by the Taliban at check points and told to leave and come back with large sums of money. Biden is going to get them killed! Enough!! We have put someone who gives a damn in charge RIGHT NOW!

The Biden administration had previously warned citizens not to go to the airport on Saturday after U.S. Command had detected a “credible threat” against the airport.

Odom’s interview also comes days after a suicide attack on the airport left 13 U.S. service members dead and dozens of others injured, making it the fourth-deadliest day for U.S. forces in Afghanistan.

In an effort to deter further attacks and retaliate for the deaths of the service members, the Biden administration launched a drone strike against Islamic State fighters that inadvertently killed at least six children.