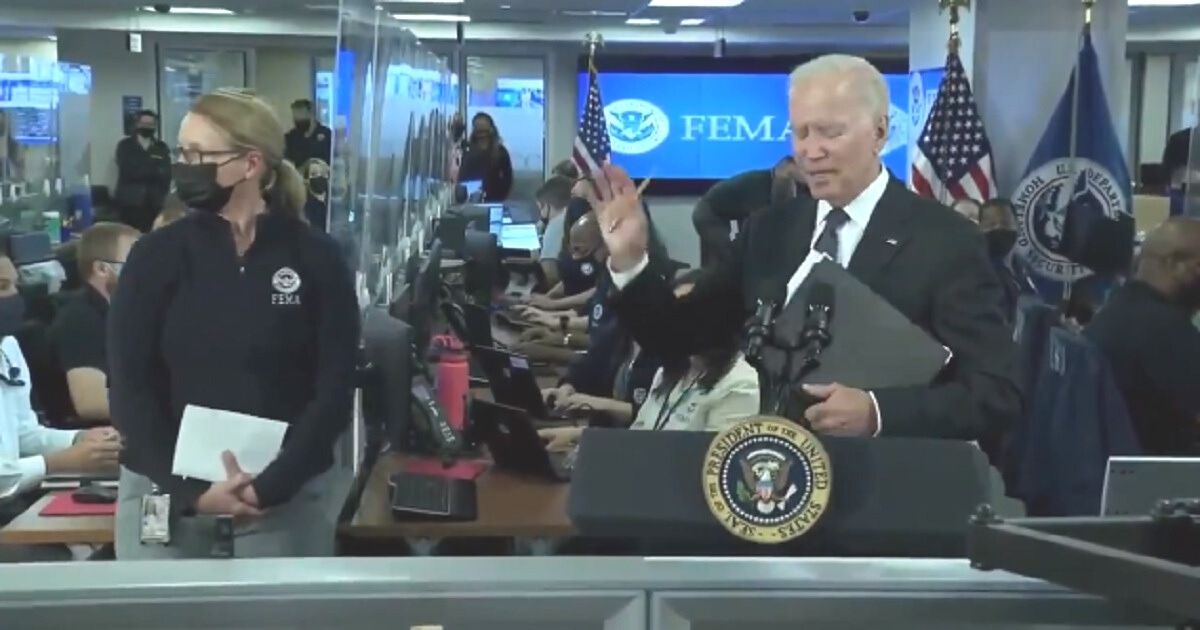 The following article, Biden Walks Out of Media Event After Reporter Asks About Afghanistan, was first published on Flag And Cross.

As Hurricane Ida was making landfall along the Louisiana coast, President Joe Biden was making an appearance at the Federal Emergency Management Agency, hoping to make some news.

After the president made a series of pronouncements about the government’s preparations for the monster storm, Bloomberg News reporter Jennifer Jacobs wanted to get a word in about the global storm over Biden’s shame-faced withdrawal of American troops from Afghanistan.

Biden’s initial reaction made it clear that the supposed leader of the free world has others telling him what to do,

President Biden: “I’m not supposed to take any questions but go ahead.”

“I’m not — I’m not supposed to take any questions but go ahead,” Biden told Bloomberg News reporter Jennifer Jacobs.

“Mr. President, on Afghanistan,” was as far as Jacobs got.

A transcript of the sessions released by the White House showed that Jacobs persisted even as Biden turned to flee from the podium.

“Can you say if there’s still an acute risk at the airport, sir?” she asked.

“OK,” Biden said during her question as he left, turning his back to the media as he spoke to FEMA employees while leaving and appearing confused about which direction to walk.

The incident ignited a fresh round of criticism of the president.

Sleepy Joe Biden at FEMA Headquarters: “I’m not supposed to take any questions, but go ahead.”
“Mr. President, on Afghanistan…”

A better question would have been “Mr. President, who decides what you are allowed or not allowed to say?”

President ⁦@JoeBiden⁩ refuses to take a question on #Afghanistan. Walks away after offering to take questions. Sleepy Joe will go down in history as the first U.S. president who helped the enemy win and then rewarded it with billions in arms & ammo.https://t.co/SDjPZ3c8CS

Biden was asked at question about Afghanistan while at the FEMA news conference.

He abruptly refused to answer & walked away! What an arrogant SOB!

Although Biden had nothing to say about Afghanistan, House Minority Leader Kevin McCarthy has plenty, according to CNN.

“The President is preparing to leave Americans and allies we made distinct promises to behind. Indeed, he admitted last week ‘getting every single person out cannot be guaranteed,'” McCarthy, an outspoken critic of Biden’s performance in Afghanistan, wrote in a letter to fellow Republicans, according to CNN.

“Frankly, this is not the tested leadership the President promised. Political decisions designed to get photo ops lead to fatal national security consequences on the battlefield. It was a political decision to act in haste days prior to the anniversary of September 11 — and our men and women in uniform died as a result,” McCarthy wrote.

Continue reading: Biden Walks Out of Media Event After Reporter Asks About Afghanistan ...