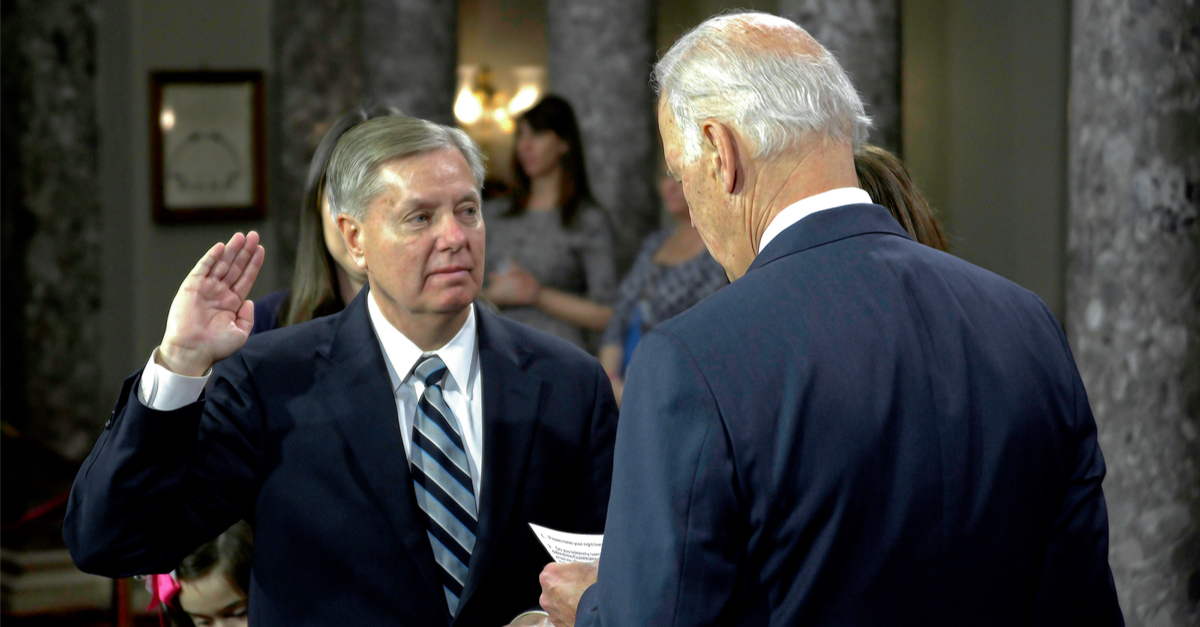 The following article, Lindsey Graham Goes There: Says Biden Should Be Impeached, was first published on Flag And Cross.

Over the course of the last week, there have been murmurs a’plenty regarding what sort of real trouble Joe Biden is in over his Afghanistan failures.

Sure, his polling is slipping, but it also feels rather apparent that having presidents with sub-50% approval ratings might just be the new norm.

And yes, a few junior Representatives have raised the specter of attempting to somehow punish Biden for the bungling of the US troop withdrawal.

But now one of the Senate’s heavy hitters is piling on, and he’s even using the “I” word.

ED O’KEEFE: Sure. In your view, what kind of consequences should the president face for the decisions he made on Afghanistan?

GRAHAM: Well, did he get good advice and turn it down? Did he get bad advice and take it? What the hell happened? Whose decision was it to pull all the troops out? Was it good advice, ignored? I just don’t know. I think he should be- be facing a lot of consequences here, because the one thing he wanted to do, and he’s a decent man, it’s not about him being a decent man, is he wanted to end the war in Afghanistan and make sure we didn’t have to deal with it in the future. He’s done the exact opposite. General Biden’s fingerprints are all over this. He’s created the conditions for ISIS to flourish in Afghanistan. They’ve doubled the number of troops available because of the jailbreak. A terrorist organization called the Taliban is now in charge of the country. The likelihood of an attack on our homeland is through the roof. It was medium a month ago. It’s got to be high as hell right now.

GRAHAM: And you cannot break ISIS’s will through drone attacks. You’ve got to have people on the ground hitting these people day in and day out. You can’t do it over the horizon. He deserves a lot of accountability for this. And I’m sure it will be coming.

Then came a major shift in the narrative.

O’KEEFE: Senator, one thing, one word I don’t hear you using is one you were using before the attack on Thursday, and that is you called for his impeachment over Afghanistan. Do you still feel he should be impeached–

GRAHAM: Yeah. Yeah, I think it’s dereliction of duty to leave hundreds of Americans behind enemy lines, turn them into hostages, to abandon thousands of Afghans who fought honorably along our side, to create conditions for another 9/11 that are now through the roof. Yeah, I think he’s been derelict in his duties as commander-in-chief. I don’t think he got bad advice and took it. I think he ignored sound advice. And this is Joe Biden being Joe Biden. He’s been this way for 40 years, but now he’s the Commander-in-Chief. He’s not a senator. He’s not the vice president. These are Commander-in-Chief decisions. I think the best you could describe him as dereliction of duty at the highest level says.

O’KEEFE: Senator Graham, an erstwhile friend of this- of the president, obviously disagrees with him on this. We appreciate your time this morning. Good to see you. And we’ll be right back.

This is a radical shift in tone for Republicans, given just how infrequently they aim to slow down the legislative process, but it belies the seriousness of the situation at hand.