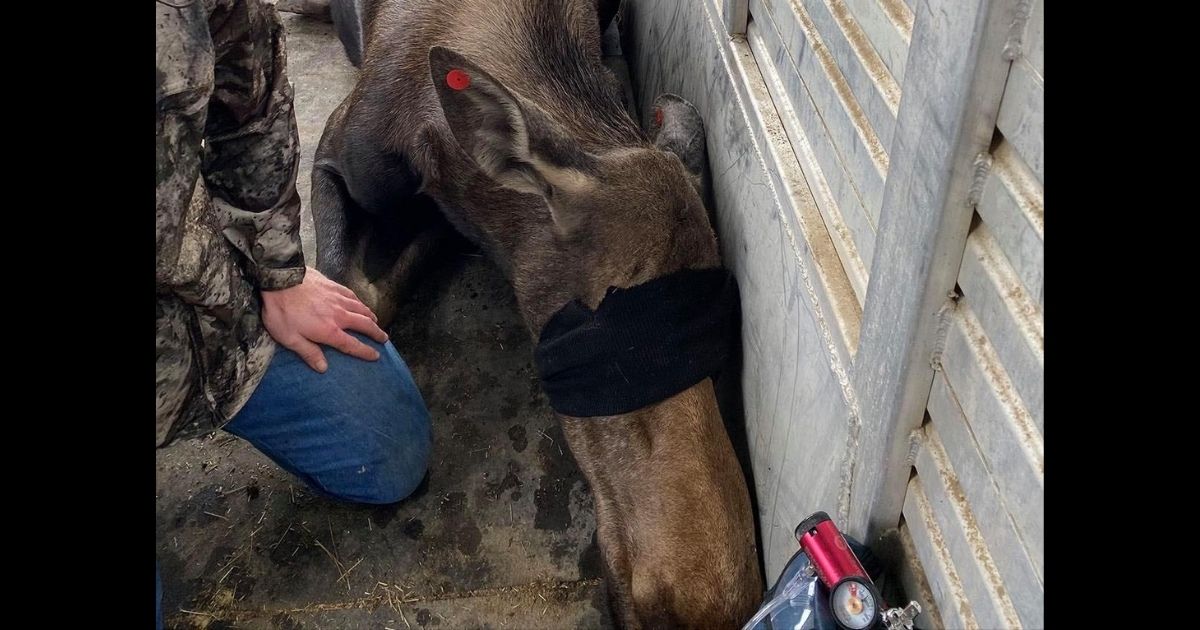 The following article, Colorado Wildlife Officer Rescues Moose Calf That Had Plummeted 4 Feet Into Burned Basement, was first published on Flag And Cross.

Wildfires are unpredictable events that have far-reaching effects. Not only are people and animals displaced, but structures and livelihoods are destroyed.

The East Troublesome Fire began on Oct. 14, 2020, northeast of Kremmling, Colorado. It burned over 190,000 acres and finally was contained on Nov. 30, according to an incident report.

Months later, one of the homes that burned in the fire posed a threat to some of the local wildlife when a baby moose fell into an open, 4-foot-deep basement in Grand Lake and couldn’t get out, according to Colorado Parks & Wildlife.

Neighbors spotted the mom and baby in distress. They attempted to fashion a ramp with boards so the baby could get out, but it didn’t work. The baby couldn’t get enough traction to hoist itself up and out.

Moose are nothing to mess with, so the locals called CPW on Aug. 19 and told them about the situation. Officer Serena Rocksund responded and assessed the situation.

“The calf’s mother would come up to the foundation, walk over to the calf and touch muzzles and walk away about 40 yards,” Rocksund said, according to a news release from CPW. “The residents saw the calf and mother were stressed and needed help, so they called CPW.”

Rocksund rescued the calf from the basement. Then, concerned that the pair would find themselves in distress again if left to roam the area, Rocksund tranquilized both the mother and baby and trailered the reunited pair to the Craig, Colorado, area, where the landscape was more suitable. (More moose later were relocated to the Craig area.)

CPW Area Wildlife Manager Jeromy Huntington said this incident is a good lesson that hazards like the exposed basement need to be handled properly so that cases such as this can be avoided.

“It’s a good reminder that folks need to fence off foundations and cover their window wells because animals can get trapped and die,” he said in the news release.

“We’ve had some increased reports of human-moose conflicts near Grand Lake since the East Troublesome Fire burn, and we didn’t want to take the risk that this moose might get trapped again if we released it near the burn area. So this relocation actually was a win-win for these moose and the CPW project.”

While there is some general awareness that exists regarding the danger of these large animals, the CPW continues to educate people of the sheer power and destructive ability of the moose by sharing warnings on social media.

One recent video they shared showed the speed with which a bull moose can charge.

“Always give moose and all wildlife space!” the post states. “This video shows what can happen when you are too close to a bull moose and how quickly they can decide to charge on you.

“The individual came upon the bull while walking along a willow bottom heading towards a lake in Clear Creek County.

“Thankfully no injuries occurred as this person managed to get behind a tree and the moose hit the tree.”