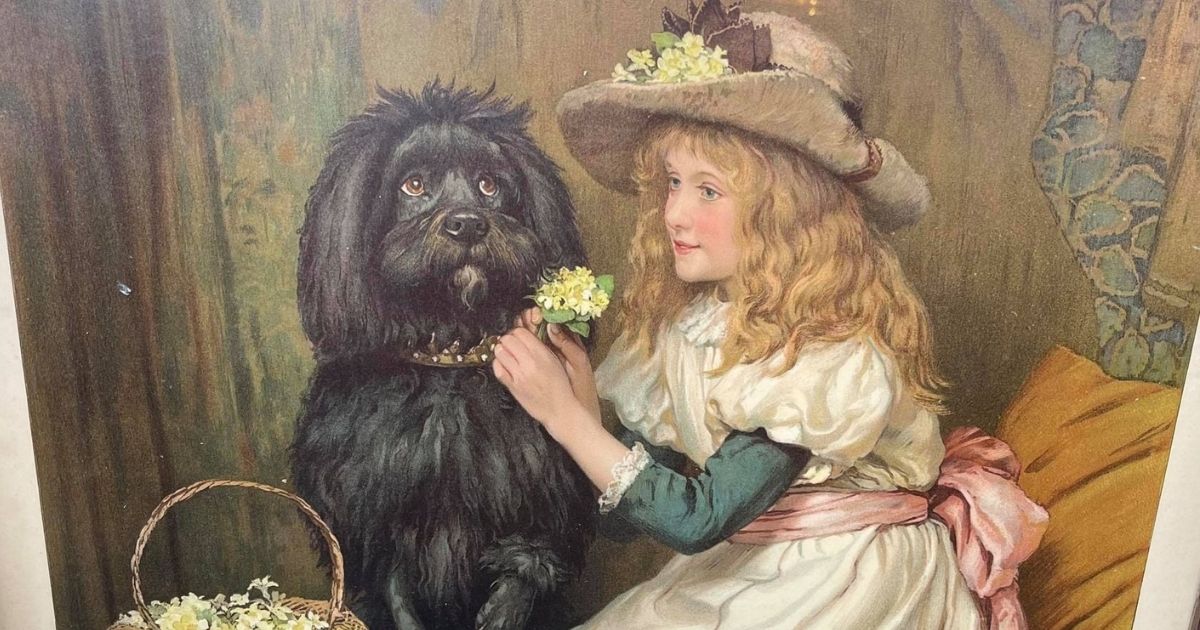 The reach of social media is vast, a fact that has been used for both good and evil, for everything from charitable endeavors to videos of cats.

There is power in this quality, a power that Karmen Smith recently tapped into to bring about a bit of kindness and restore a relic to the appropriate family.

Smith is the executive director of Hope Harbor Home Inc., which helps survivors of domestic violence (and their families), and one of the ways the organization does that is through its Hope Chest Thrift Store in Bolivia, North Carolina.

An interesting piece of artwork came into the shop, something the staff noticed in a recent donation while cleaning the new items. It was a framed painting of a girl with a dog — but along with the painting, inside the frame, was a marriage certificate from the 1870s.

The names of the couple turned out to be William DeWorth and Katey Havey, married in New Jersey on April 11, 1872, and Smith knew that someone must have a connection to the lost piece of history.

“I have very concrete memories of my grandfather telling me story after story about family [members],” Smith told Fox News. “I think it’s just so beautiful because it really gives you that realization that your parents, even though you’ve only known them the time that you’ve been alive, they had this whole life before you.”

So she cast her net on Facebook, hoping to catch a relative’s eye.

“Yesterday when at the Hope Chest Store in Bolivia we began to look at an old picture that had been donated. The image was a little girl putting flowers in a black dog’s collar. The words on the top read, ‘Christmas Number Illustrated London News 1889’. That’s not the coolest part though. Upon looking at the back it was discovered that beneath the paper was a hidden file folder. This file, contained the Marriage Certificate of a New Jersey couple.

“The date of the vows, was April 11th, 1875! This is a true treasure and was obviously, at one point in time, protected. As a society we have lost the value of story telling so its safe to assume that the story of the stowaway marriage certificate got lost in the generations that followed it,” the post continued.

Sleuths of all ability levels began searching for clues, trying to connect the certificate to current-day descendants. It was genealogist Connie Knox who made the connection and traced the lineage to 65-year-old Irene Cornish after hearing about the case on the news.

“Being a genealogist, my ears just popped up,” she told The Washington Post. “I realized there’s enough information to research it. To me, that is kid-in-a-candy-shop kind of stuff. I couldn’t resist.”

“For those following the story, these are my great grandparents, William T. DeWorth and Katey Havey,” she wrote.

Though the family ties were identified, many mysteries remain. No one seems to know how the certificate made its way to North Carolina, as none of the family lives there.

“This particular great-grandmother has always been of interest to me, I think because she was to my mother too,” Cornish said, according to Fox News.

“I would love to know where in Ireland she’s from. I’ve never been able to trace that back.”

Cornish made the trek from her home in New York to pick up the artifact, a piece she now treasures.

“We read about history, but our ancestors are our own history,” she said. “And that’s why I’m fascinated by it.”

So kind of the thrift shop to try to find the owner, so kind of the genealogist who tracked down the owner, and so cool this family got a piece of their history back!! As a family genealogist how has over 2000 ancestor photos and documents and huge family trees. I know the importance of reuniting pieces of history and sharing information with others. Kudos to all in this story who made this happen!