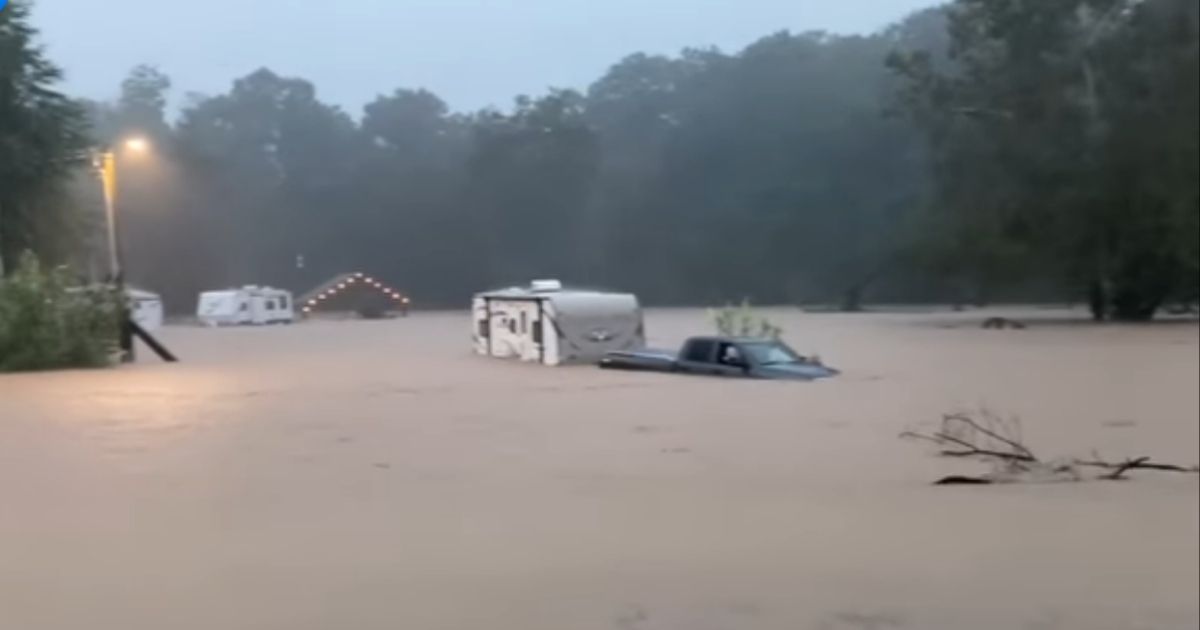 The following article, Survivor Tells Harrowing Tale of the 'Living Nightmare and Miracle' Her Family Experienced During Flood, was first published on Flag And Cross.

On Aug. 20, the Coplin family was looking forward to a weekend away, camping at Piney River RV Resort in Bon Aqua, Tennessee.

Not knowing the intense flooding that was about to hit, the family was initially excited to land one of the “few and coveted waterfront campsites” — but in less than 24 hours they would be having a very different experience.

“My family, dear friends, and now newly trauma bonded friends lived a living nightmare and miracle this weekend,” Lindsey Coplin’s recap post began. “We were part of the ‘Waverly flooding’ that is making national news. The water rose so quickly. I have no idea how much it actually rose, but I’m guessing at least 50 feet within just a couple hours.”

“My dear college friend, Leslie Michelle Thompson, her husband and 2 children had joined us to have a relaxing weekend reunion. We both decided not to unhitch our trailer from our truck ‘to keep things simple’ and do less work. We even didn’t put on our xchocks or chock the camper wheels, which later helped us save our car and camper, but if we had them on we would have lost it all.”

After they’d gone to bed, the storming started. Lindsey described how she woke several times and felt uneasy about the conditions, but it was at 6 a.m. that things really started to go downhill.

“I woke again around 6 and asked Luke to check again,” she wrote. “This time the look of terror on his face said it all. I looked out the door to see water rushing under the camper and over our camper steps so I couldn’t see the ground at all … a sight that will not get out of my head. The water was rapidly rising as we got over 14″ of rain in such an acute area.”

They all fought to get out of the camper and into the truck as the water continued to rise, and in the scramble, Lindsey lost her phone. They managed to drive through the water, pulling their camper to a better spot, and then Lindsey and her kids joined Leslie and her kids in their camper.

Their neighbors had noticed the conditions too, and people began to try to escape their campers and warn the others around them.

Lindsey went back to try to save more of their gear, but much of it was being swept away. One woman with a broken arm was found tangled in the brush near their campsite, and Lindsey’s husband, Luke, managed to get her out with the help of another friend.

The woman’s elderly parents were in a bad situation, too. The couple and their two dogs were trapped in their truck, which was still attached to their camper. The water came up to the windows and kept rising, and they were forced to go to the roof of the truck. People used ropes, ratchet straps, and even a kayak to try to get to them — but it was unsuccessful.

While the owner and others tried vigilantly to reach the couple and their dogs, Lindsey and Leslie tried to keep the kids distracted in the camper.

“While the men were trying to save the elderly couple, I remember at one point Leslie and I grabbed each other and bawled in an embrace, but the story wasn’t near over,” the post continued.

“Meanwhile, the couple somehow had found a cooler, put their small dog in it, clutched the other dog under their arm, and clutched onto the cooler handles to float down the river,” Lindsey wrote. “People ran to catch them where the river narrowed. That’s when we realized that my friend Leslie’s camper was now trapped on the fenced in road by the flood water.”

They moved the kids again while the men tried to save Leslie’s camper. They managed to at least save the SUV after ripping out a section of fence that was hemming it in, but the camper was a loss and was washed away.

“Having the kids ask why this was happening and if everyone is alive as we watched campers float down the river was surreal and hard for me to keep it together,” Lindsey continued. “Trying to shield their eyes from seeing too much … I just kept saying I’m thankful we have each other and that we are alive … that it’s all that matters and that material things can be replaced … lives cannot.”

They finally made it to the highest point on the property, and it became a waiting game. There was no way out. They were surrounded by water. Many of their possessions had been lost or damaged.

“Even at that highest point we were so terrified and were still creating rescue plans on how to get out on foot if the water continued to rise,” Lindsey wrote. “There were creeping thoughts of death in our heads.”

The owner of the grounds held a meeting, and those who’d made it to the high ground rallied together to share their food and skills, and make sure everyone was taken care of. Helicopters passed overhead.

“Meanwhile, Leslie and I made the most of it, got in our bathing suits with the kids and had them run around catching frogs and going on walks,” Lindsey’s post continued.

“I’m so proud of the kids and their attitudes and resilience even though we know how much counseling this trauma will take. As the water level lowered, we started looking around the campground. We found Leslie’s camper on it’s side up against a tree, several campers crashed together, and the campground office had water marks that went to the door jam. At one point we had 8 adults and 4 kids and 4 dogs sitting under our camper awning eating ‘lunch.'”

Finally, at 5 p.m., after nearly 12 hours of chaos, the water receded enough to where they were able to leave the campsite and make their way home. They later found out that the elderly couple who floated down the river had been rescued.

Since the ordeal, Lindsey has set up a GoFundMe to help the Thompsons replace the belongings they lost inside their camper, which insurance will not replace.

“This is by far the scariest thing I have ever been in,” Leslie Thompson wrote in her own account. “But in the midst of fear, loss and sadness, I saw the Lord provide in the smallest ways and I saw human beings come together to take care of one another.

“The rain stopped long enough for the water to recede so we could get our car out. Despite minor cuts and bruises, our whole family is alive and for that I’m so thankful.”