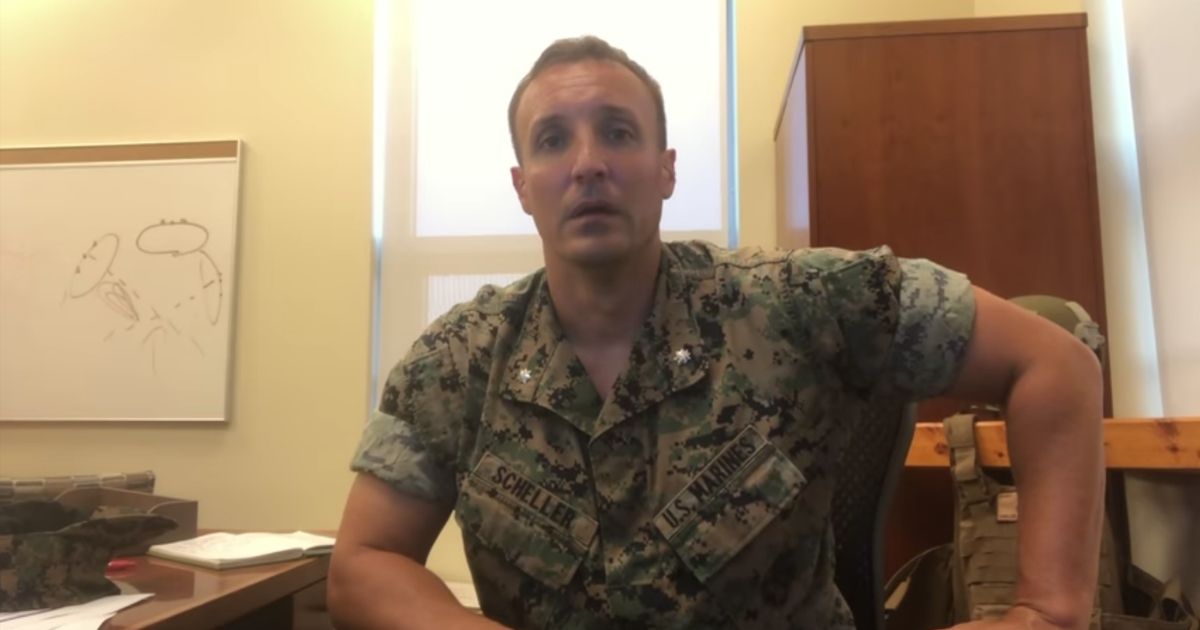 Thirteen American service members are dead, 11 of them Marines, after a terrorist attack at the airport in Kabul, Afghanistan. Following the fatal bombings, a Marine went on social media, demanding leadership accept “accountability” for the morass we find ourselves in as we withdraw from the country.

The Marine was relieved for cause.

At the start of the video, Scheller said he was “making it because I have a growing discontent and contempt for” what he saw as “ineptitude at the foreign policy level.”

“I want to specifically ask some questions to some of my senior leaders,” Scheller said, while acknowledging he was “willing to risk my current battalion commander’s seat, my retirement, my family’s stability to say some of the things that I want to say.”

He added that the defense secretary, the Joint Chiefs chairman and the Marine commandant “are supposed to advise” the administration.

“I’m not saying we’ve got to be in Afghanistan forever,” Scheller said.

“But I am saying, did any of you throw your rank on the table and say, ‘Hey, it’s a bad idea to evacuate Bagram Airfield, a strategic airbase, before we evacuate everyone’? Did anyone do that? And when you didn’t think to do that, did anyone raise their hand and say, ‘We completely messed this up’?”

Scheller posted the video on Thursday on Facebook, captioning it with, “To the American leadership. Very Respectfully, US.”

By Friday, he’d been relieved for cause by the Marines.

Marine officer Stuart Scheller has been relieved from duty for this video.

“My chain of command is doing exactly what I would do … if I were in their shoes,” Scheller wrote in a Facebook update.

“I appreciate the opportunities AITB command provided. To all the news agencies asking for interviews … I will not be making any statements other than what’s on my social platforms until I exit the Marine Corps.”

“America has many issues … but it’s my home … it’s where my three sons will become men,” he continued.

“America is still the light shining in a fog of chaos. When my Marine Corps career comes to an end, I look forward to a new beginning. My life’s purpose is to make America the most lethal and effective foreign diplomacy instrument. While my days of hand-to-hand violence may be ending … I see a new light on the horizon.”

In another Friday post, Scheller noted, “Last night when I posted the video I immediately had multiple Marines call and ask me to take down the post. ‘We all agree with you Stu, but nothing will change, and it will come at a huge personal cost to you.’”

“Obviously I didn’t take it down. Now that I’ve had time to process … I’ll offer this … we can’t ALL be wrong. If you all agree … then step up. They only have the power because we allow it. What if we all demanded accountability?”

And yet, as Donald Trump Jr. pointed out in a tweet, our top brass can go after journalists or lecture Congress about critical race theory without consequence.

“The woke generals can troll Tucker Carlson on twitter and pontificate about ‘white rage’ in front of Congress, but simply asking for accountability for their deadly mistakes … gets you fired. What a disgrace,” he tweeted.

The woke generals can troll Tucker Carlson on twitter and pontificate about “white rage” in front of Congress, but simply asking for accountability for their deadly mistakes…gets you fired.

Trump Jr. was referring to the backlash from the top levels of military officialdom earlier in the year when Fox News’ Tucker Carlson was critical of wokeness in the ranks, as well as Milley’s testimony before Congress in which he defended teaching critical race theory because, in part, “I want to understand white rage, and I’m white. And I want to understand it.”

The difference is that this is a one-way street. Of course, there are rules in the military and criticizing those at the top of the chain of command in such a public way is verboten. Yet, if Scheller were pressing for accountability regarding “white rage,” one gets the feeling this would have had a different ending. Accountability for Afghanistan is a horse of a different color, however.

While Scheller has promised not to give any interviews until he’s out of the Marines, he also noted he’s looking “forward to a new beginning” and said he saw “a new light on the horizon.” This isn’t the last we’ve heard of him, in other words — and if he can help ensure those responsible for the debacle in Afghanistan are held to account, even in some small way, it’ll be worth it.