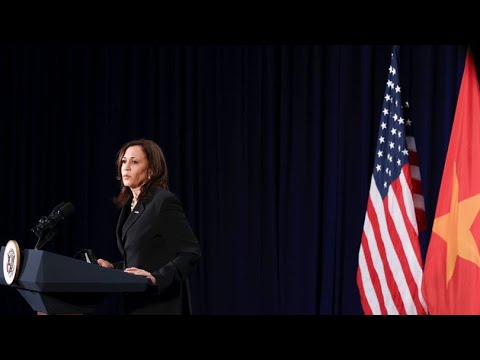 The following article, VP Harris Omits Troops When Asked Who the Admin Is Prioritizing in Afghanistan Evacuation, was first published on Flag And Cross.

In April, she said she was the “last person in the room” before Biden decided on his withdrawal policy, according to the New York Post. She seems significantly less happy to own it these days.

Last week, during a news conference, she made the galling mistake of smiling and laughing inappropriately when asked about Afghanistan, the Post reported.

On Thursday, when in Vietnam, she was asked what a “successful” evacuation of Afghanistan would look like. Her answer, curiously, didn’t involve getting our troops out.

“Just on Afghanistan because you yourself have said throughout this trip that the evacuation is at the top of mind for most Americans,” Jaffe said.

“So when we’re talking about the evacuation, how does the U.S. measure success? I mean, what does the completion of that mission look like? Is it a matter of simply evacuating all Americans? Is there a number of Afghans that we’re hoping to evacuate?

“And with that in mind, now that we’re seeing that there are terrorist threats against the Kabul airport, there’s sort of an increasingly difficult security situation there. Can you affirm that Americans are safer today than they were before the U.S. withdrew from Afghanistan?”

“As I’ve said before, and as you’ve noted, our highest priority right now is evacuating American citizens, evacuating Afghans who worked with us and Afghans who are at risk with a priority around women and children,” Harris responded. “And we have made significant progress in that regard.”

“I believe since Aug. 14, I believe, we have evacuated over 80,000 people,” she continued. “And as you know each day and night, we continue to evacuate thousands of people understanding that it is risky for them to be there.

“It is a dangerous and difficult mission, but it must be seen through and we intend to see it through as best as we can.”

And there wasn’t a single word about troop extraction in her definition of a successful evacuation.

The Biden administration couldn’t have been in more of a rush to try to get out of Afghanistan — so much of a rush, in fact, that the country collapsed like a house of cards.

Because of the rapid ascent of the Taliban, the administration then had to send in more troops to get Americans and our allies out of the country.

This has been complicated by the Taliban’s refusal to allow our citizens or Afghans who have worked with the United States access to Hamid Karzai International Airport in Kabul — the only way out of the country.

After letting 20 years of American military sacrifice in the country go to waste, after pumping more troops into the country in a desperate attempt to get people out, Kamala Harris still didn’t say anything about extracting the troops.

To make things worse, this came before at least 13 U.S. service members died in terrorist attacks at the Kabul airport, according to Fox News. It shouldn’t have mattered, of course — there was no reason to forget it in the first place.

However, it was a stark reminder about how, after the Biden administration deployed 5,000 troops to Afghanistan to help speed the evacuation caused by a vacuum they created, those troops don’t even get mentioned by the vice president.

Our men and women in uniform have made and continue to make incredible sacrifices in Afghanistan. Thirteen of them made the ultimate sacrifice yesterday. If we can’t focus on keeping the country out of the Taliban’s hands anymore, we can at least focus on getting our soldiers home.

Harris’ answer showed that for all the administration’s rhetoric about protecting our soldiers, that’s all it is: rhetoric.

Continue reading: VP Harris Omits Troops When Asked Who the Admin Is Prioritizing in Afghanistan Evacuation ...

To be fair US troops should be the last to leave when their evacuation mission ends.