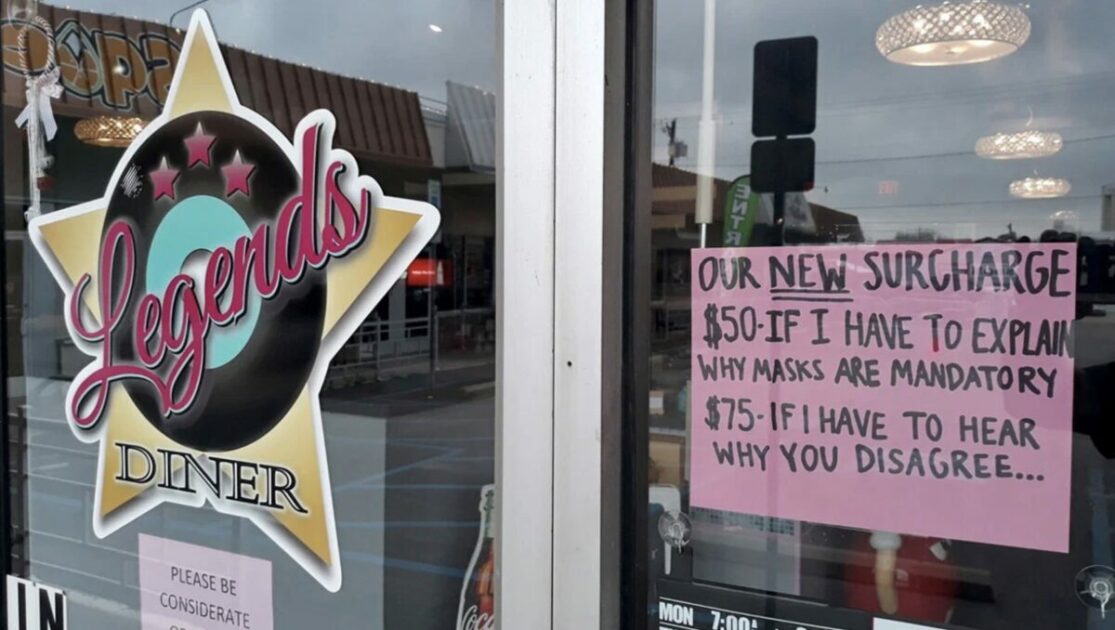 The restaurant in Denton, Texas, that announced higher prices for customers who won’t wear a mask just announced that it is closing its doors forever.

The Legends diner caused a national uproar last March when it posted a mask requirement for customers.

Wayne Lacombe, the owner of Legends posted a sign that told customers that they would have to pay $50 for asking why the diner wanted to require masks, and $75 if the owners had to hear the customer say they disagree.

Lacombe added, “We’re really at a disadvantage here. We have to stop the bleeding.”

In March, Lacombe tried to claim that he was just being “funny” with the sign, but that there was a serious side to the incident, too.

“When we put the sign up, it was done in humor,” he said. “But we wanted to make sure we got our word across that we were serious about this. Kat is a retired registered nurse, so we want to make sure that everybody is safe.”

Lacombe found both support and opposition to his sign stunt.

“It’s kind of hard to have respect for people that don’t feel the pain you’re feeling, so it is what it is,” he said.

The diner will close for food service on August 29 and then open to sell its supplies, decorations, and equipment on August 31.

It looks like he found more opposition than support. Welcome the land of the free.

This is what happens when you try to take away people’s freedoms to choose for themselves how and what they want to stay safe. It does not sound like this couple learned any lessons. Since there have been numerous indepth studies showing masks give almost no safety, it is crazy that people are still buying into the hype and lies. Cloth masks offer ZERO protection; paper masks (the most common used) offers 10% protection, and the highly-touted N95 masks offer 50%. Almost no one wears the N95 and people are given a false sense of security. when they wear masks.… Read more »

You want people to feel your pain, but you don’t want to feel theirs.

There is no unit of measure for stupidity at this level. It appears this idiot was waay off on the number of Libs coming in to his restaurant.