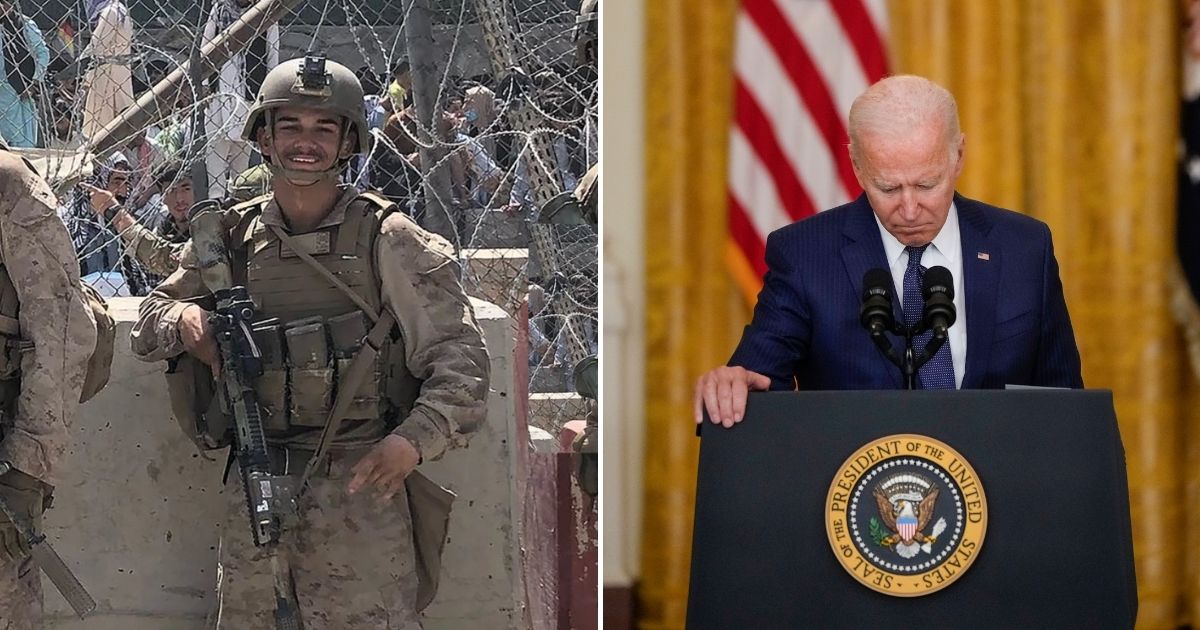 The following article, Dad of Marine Killed in Kabul Blames Biden for His Death: 'Biden Turned His Back' on My Son, was first published on Flag And Cross.

On Thursday, 13 United States service members died in Afghanistan after the Biden administration’s failed withdrawal. One of the victims was 20-year-old U.S. Marine Kareem Nikoui.

According to the Daily Beast, Kareem’s father, Steve, feared the worst as soon as he heard the news of the suicide bombing near the Abbey Gate of the Hamid Karzai International Airport.

“I stayed home from work yesterday because there was that attack and I knew he was there,” Nikoui told the outlet. “So all day, I was glued to the TV.”

Around 7:15 p.m. Eastern Time in his hometown of Norco, California, Nikoui saw three Marines walking up to his house. They eventually delivered him the news no parent should ever have to hear: Your son has been killed.

“I haven’t gone to bed all night,” Nikoui told the Daily Beast on Friday morning. “I’m still in shock. I haven’t been able to grasp everything that’s going on.”

In a separate interview, Nikoui told Reuters his son sent a video Wednesday of himself comforting Afghan children at the Kabul airport. A day later, he was gone.

“He was born the same year it started, and ended his life with the end of this war,” the elder Nikoui said of his son, Kareem.

Despite his professed desire to “respect the office” of President Joe Biden, Nikoui was unable to contain his emotions while talking to the Daily Beast.

“They sent my son over there as a paper pusher and then had the Taliban outside providing security,” he said. “I blame my own military leaders … Biden turned his back on him. That’s it.”

It’s hard to blame Nikoui for placing the blame on Biden. Before his botched withdrawal plan, no Americans had been killed in action in Afghanistan since Feb. 8, 2020, ABC News reported.

According to the Casper Star-Tribune, U.S. Marine Rylee McCollum was also among those slain. He was just two years out of high school and was expecting a child with his new wife.

“He wanted to be a Marine his whole life and carried around his rifle in his diapers and cowboy boots,” his sister Roice told the Tribune.

“Rylee will always be a hero not just for the ultimate sacrifice he made for our country, but for the way he impacted every life around him for the better. Making us stronger, kinder, teaching us to love deeper.”

On Thursday evening, Biden held a sleepy news conference to address the U.S. casualties. He used that time to make thinly-veiled threats that were more vague than frightening.

“To those who carried out this attack, as well as anyone who wishes America harm, know this: We will not forgive,” Biden said. “We will not forget. We will hunt you down and make you pay.”

BREAKING: President Joe Biden says his message to those who attacked U.S. forces today is: “We will not forgive. We will not forget. We will hunt you down and we will make you pay.” pic.twitter.com/q6X775egM5

Those words seem hollow as America grapples with the reality of 13 completely preventable deaths of U.S. service members. If it weren’t for Biden’s incompetence, who is to say they wouldn’t still be alive today?

No one knows the weight of this question better than the families of those lost soldiers. As for Nikoui, his message is clear: Biden betrayed those brave Americans.

Continue reading: Dad of Marine Killed in Kabul Blames Biden for His Death: 'Biden Turned His Back' on My Son ...

How many Biden voters would vote for him today ? Not the rigged voting machines but real people, real voters. My guess is many Biden voters would never admit they were wrong but they would change their vote if it were possible without anyone knowing. Th US is in serious trouble thanks to Biden, his administration and the RINOs.
God Bless our troops who died fighting for an America many of our elected officials are trying to destroy. Our deepest sympathy to their grieving families.

THIS BIDEN GUY IS A REAL LOSER