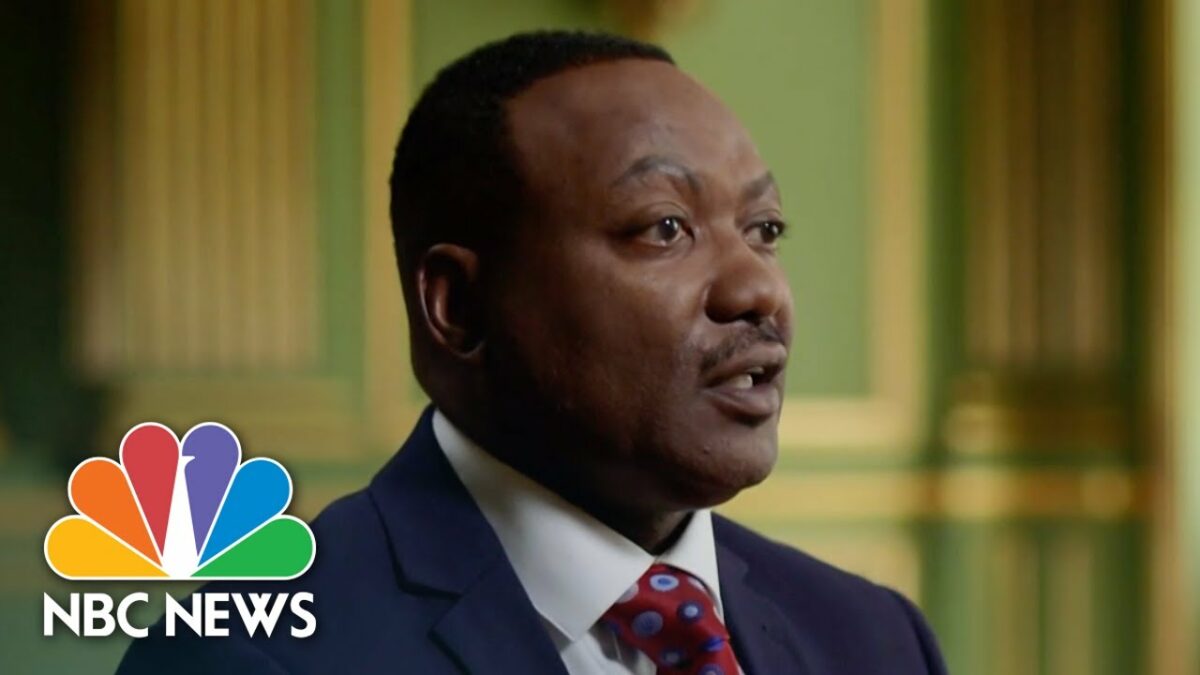 Babbitt was shot and later died of her injuries while trying to open a door that led to the chamber of the House of Representatives.

Byrd, who has been cleared of misconduct, initially had his name withheld by the Capitol Police but came forward for an interview with NBC News.

In a video clip from the interview, Byrd said that at the moment he killed Babbitt, “she was posing a threat to the United States House of Representatives.”

“I know that day I saved countless lives,” Byrd said. “I know members of Congress, as well as my fellow officers and staff, were in jeopardy and in serious danger. And that’s my job.”

Babbitt and others were trying to force open the doors, which had been barricaded by Byrd, fellow Capitol Police officers and members of Congress who remained in the chamber.

“Once we barricaded the doors, we were essentially trapped where we were,” Byrd said. “There was no way to retreat. No other way to get out.”

“If they get through that door, they’re into the House chamber and upon the members of Congress,” he said.

In that isolation, Byrd said, the only thing he knew of what was taking place outside the chamber came through on his radio. Reports came in of extreme violence, some of which did not actually take place but were reported in what Byrd described as the fear-filled moments in which Capitol Police saw comrades downed. One report said an officer’s fingertips were blown off.

“It was literally broadcast over the air,” Byrd said. “I said, ‘OK, this is getting serious.’”

Byrd claimed that he called for those trying to force their way in the door to get away from it. A lawsuit filed by Babbitt’s family says otherwise.

Byrd fired his gun and hit Babbitt in the left shoulder. She later died.

Byrd, who is black, said he did not know until later he killed an unarmed white woman. He called the shooting a “last resort.”

“It was impossible for me to see what was on the other side,” he said.

But he knew that the crowd outside was building.

“At that point is when I realized they’re here,” Byrd said. “The chants got louder. I couldn’t make out what they were saying, but it sounded like hundreds of people outside of that door.”

Although guards outside the chamber stood down, Byrd would not. He watched Babbitt try to enter.

“I could not fully see her hands or what was in the backpack or what the intentions are,” Byrd said. “But they had shown violence leading up to that point.”

“I tried to wait as long as I could,” he said. “I hoped and prayed no one tried to enter through those doors. But their failure to comply required me to take the appropriate action to save the lives of members of Congress and myself and my fellow officers.”

Prior to the incursion, which took place on the day Congress met to certify the results of the hotly disputed presidential election, Byrd said there was no anticipation of anything more than a routine day.

“We did not get specific intel that would require us to change or adjust our posture,” he said. “At that point, it felt like a routine event that I’ve done over the last 28 years of my career.”

Byrd said that since Jan. 6, he has received threats, some laden with racism.

“They talked about, you know, killing me, cutting off my head,” Byrd said. “It’s all disheartening, because I know I was doing my job.”

The officer said he was saddened by the events of that day, but was unrepentant.

“Sometimes, you can’t do anything but cry,” Byrd said. “You felt like you did your job. You helped protect our legislative leaders of this country and you fought for democracy and keeping them established.”

“It’s frightening,” Byrd said. “I believe I showed the utmost courage on Jan. 6, and it’s time for me to do that now.”

He said that he knows there are people who disagree with his actions that day and that they may always disagree.

“I hope they understand I did my job,” Byrd said. “There was imminent threat and danger to the members of Congress. I just want the truth to be told.”