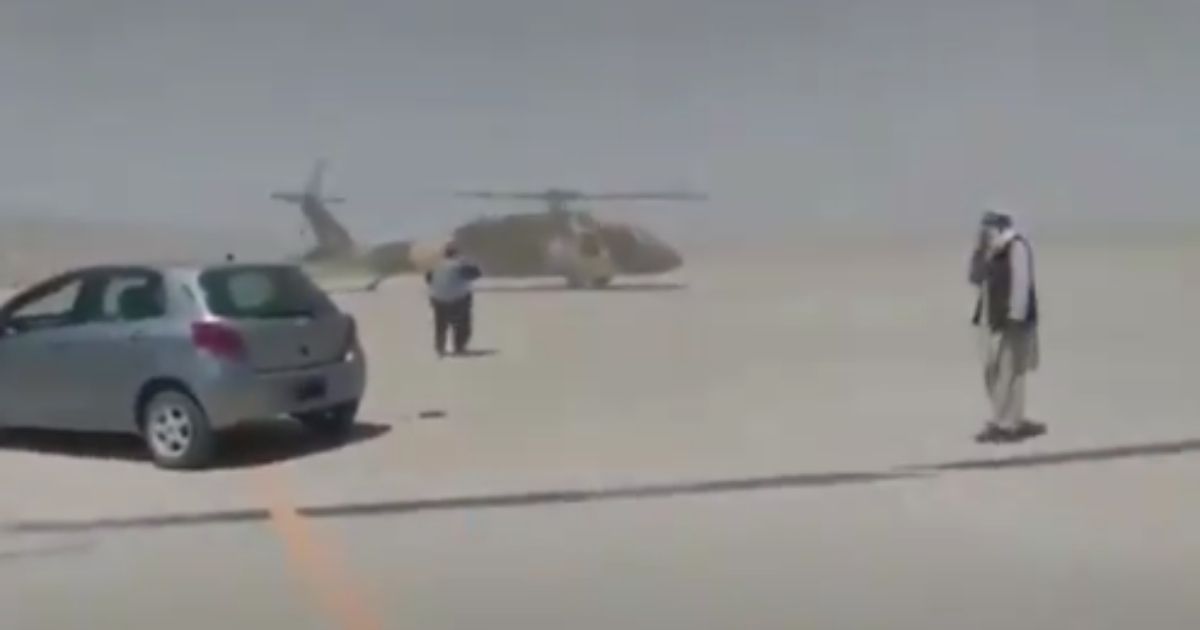 New viral video appears to show Taliban fighters taking a joyride in an abandoned Black Hawk helicopter gifted to them by the Biden administration.

One of the most disgraceful consequences of President Joe Biden’s surrender to the Taliban is all the military equipment he left behind for the terrorists in Afghanistan.

Images of the Taliban’s new American gear have taken the internet by storm.

Thanks to the lack of planning & chaotic withdrawal of US forces, Taliban troops now have their hands on some new toys: American guns, vehicles, and other military equipment. It makes Commander in Chief Biden look incompetent & clueless.pic.twitter.com/AdaMRuHsPy

The Pentagon has nothing much to say about the matter, as Defense Department spokesman Joh Kirby made clear this month:

Washington Times’ @mrglenn: “What’s it going to say for a 20-year-war in #Afghanistan if it ends with the Taliban rolling into Kabul in U.S.-made MRAPs and Humvees and carrying weapons that our allies turned over to them?” pic.twitter.com/ClDTSxeaDN

Forbes reported that in 2021 alone, the U.S. gave $3 billion in taxpayer money to the Afghan military. It’s unclear how much the equipment currently in the hands of the Taliban cost the American people, but The Federalist put it at $85 billion.

In any event, Biden has armed America’s enemies to the teeth, and they’re enjoying it.

Video posted on Twitter on Wednesday shows what appears to be Taliban soldiers cruising around an airport in a UH-60 Black Hawk helicopter given to the Afghan military by the U.S.

It’s no secret that the Taliban seized a major haul of US military-supplied gear when it took over Afghanistan earlier this month.

Does anyone know if there’s an Idiot’s Guide to Flying a Blackhawk? If you’ve got a copy, the Taliban needs you. pic.twitter.com/ubYlVVoa9y

The Drive reported that the insurgents were tooling around an abandoned U.S. airfield in Kandahar province.

The chopper never left the ground, but it looks like the fighters were enjoying themselves, quite literally at our expense. The Taliban is rubbing Biden’s failure in our faces.

It’s clear that our enemies have benefited from Biden’s botched exit beyond their wildest dreams. A ragtag group of goat farmers now wields state-of-the-art weaponry abandoned by the world’s leading military.

It is a shameful display of waste and fiscal irresponsibility, to say the least. Our “experts” left a destabilized country, and on the way out they gave a brutal gang of killers and rapists some Black Hawk choppers.

The administration responsible for the Black Hawk joyride in Kandahar is the same one that wants to ban you from owning firearms. Remember these images in Afghanistan the next time a Democrat in Washington starts talking about “gun violence prevention.”

We all paid for that Black Hawk and those abandoned rifles.

We must ensure that the administration that has provided billions of dollars worth of weapons to terrorists never lays a hand on our Second Amendment rights.