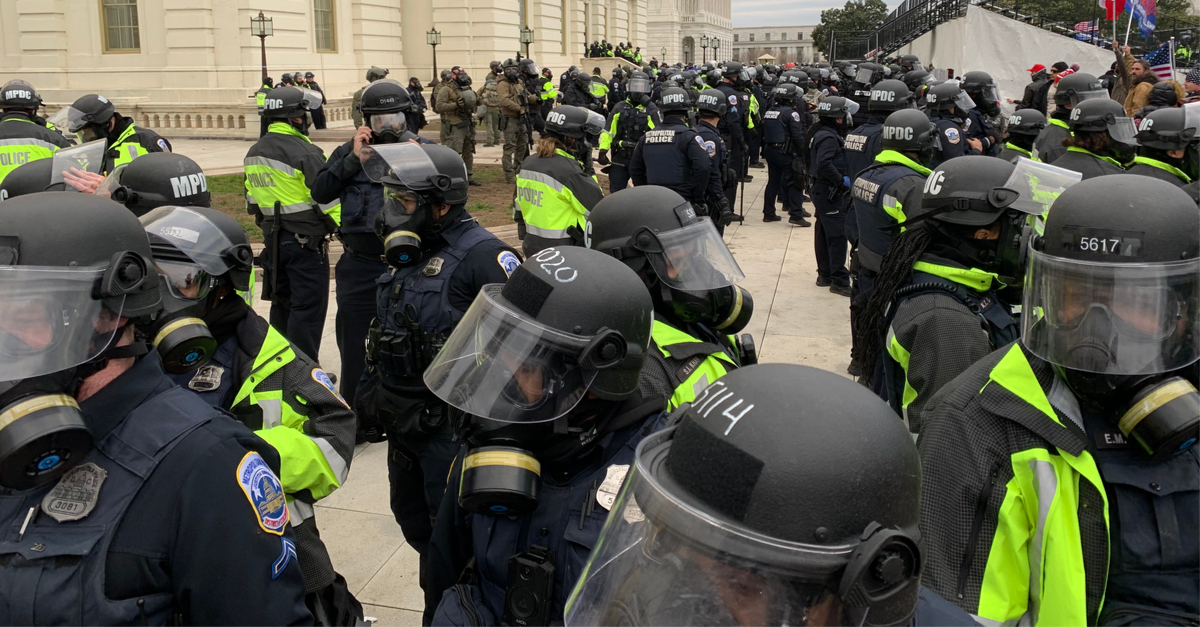 The following article, Police Now Suing Donald Trump Over Events of January 6th, was first published on Flag And Cross.

In the case of Pelosi’s actions, the effort looks to be headed down a path of redundancy, as the preparation made public thus far appears to be railroading the investigation into territory already covered during Trump’s second impeachment trial, the result of which was an acquittal of the former President on the accusation of “inciting an insurrection”.

Pelosi seems to want a different outcome this time around, and this parallel but not-quite-bipartisan probe could provide her with some sort of “official” closure that is more to her liking.

But the other threat facing Trump now comes to us from a group of Capitol Police officers.

Seven veteran Capitol Police officers who defended Congress during the Jan. 6 attack are suing former President Donald Trump, pro-Trump militias and other associates, claiming they conspired to violently overturn the results of the 2020 election.

The suit, filed Thursday morning in U.S. District Court in Washington by the Lawyers Committee for Civil Rights Under Law, contends that Trump and his allies violated the Ku Klux Klan Act and D.C. law by scheming to block Congress from certifying Joe Biden’s win.

“Because of Defendants’ unlawful actions, Plaintiffs were violently assaulted, spat on, tear-gassed, bear-sprayed, subjected to racial slurs and epithets, and put in fear for their lives,” the suit says. “Plaintiffs’ injuries, which Defendants caused, persist to this day.”

The lawsuit is taking aim at just about everyone in Trump’s orbit.

Also named as defendants in the suit, which seeks an unspecified amount of damages: the Trump campaign, longtime Trump adviser Roger Stone, a group called Stop the Steal that helped organize the rally Trump addressed on Jan. 6, more than a dozen individuals facing criminal charges related to the riot and several organizations whose members were allegedly involved, such as the Oath Keepers and Proud Boys.

The news comes just a day after it was revealed that Democrats on the select committee to investigate January 6th requested an enormous trove of documents from the Trump administration, including a number of call logs between the then-President and members of his inner circle.