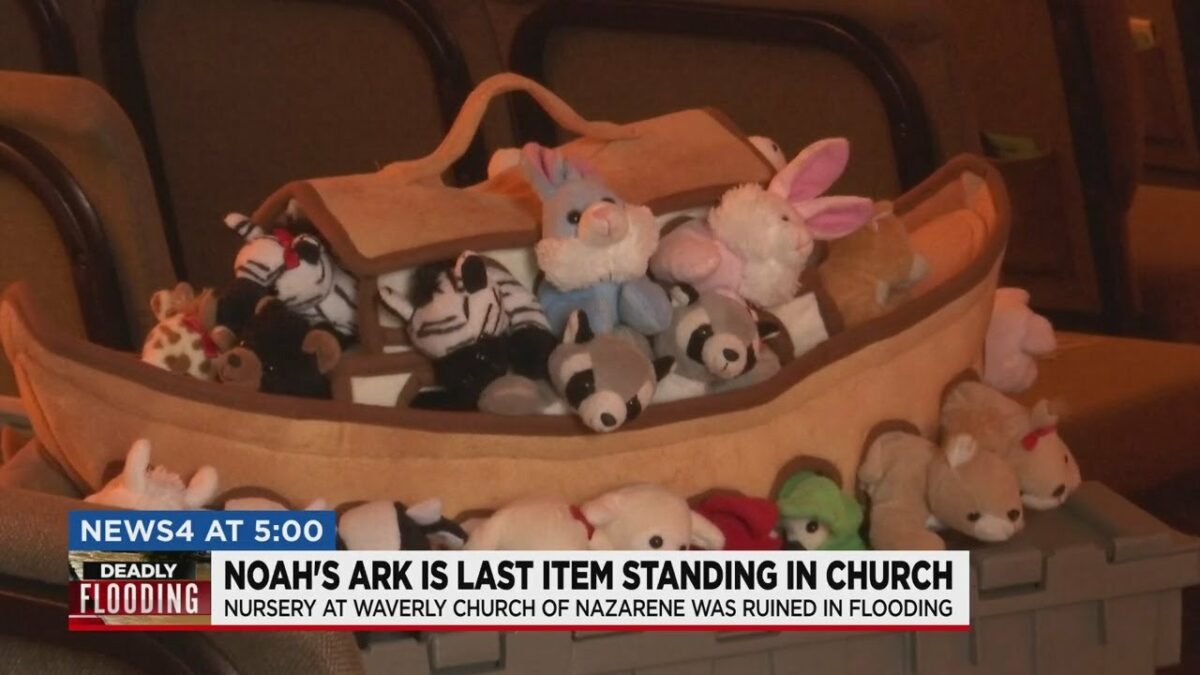 A toy replica of the biblical Noah’s ark was found undamaged in a church basement in Tennessee following last week’s historical flash flooding that caused hundreds of thousands of dollars in damage.

The toy was found inside the nursery at the Waverly Church of the Nazarene in Waverley, Tennessee, by a young girl who was sorting through the debris in an effort to salvage any valuable items, WSMV-TV reported on Wednesday.

At least 22 people have been confirmed dead with another dozen still unaccounted for following the record-breaking floods, with multiple locations seeing over a foot of rain in a short period of time.

Several individuals, which included lead pastor Daron Brown and his two teenage sons, were trapped in the church during the floods. WSMV reported the group attempted to barricade the doors from the rapidly-rising waters.

“Furniture and sheds and vehicles floated by,” Brown said, adding that the time had been “scary” for the community.

After the water subsided, most of the church remained intact, but the bottom, which included a nursery, had been completely destroyed, according to WSMV.

As the group was clearing out the rubble and debris left behind, Macy Brown, a young girl who was also trapped in the church, discovered a plushie version of Noah’s ark that was left untouched by the floodwaters.

“So me and my brothers went downstairs after the flood to get all the water out and pick up some of the stuff,” Brown told WSMV. “And I went into the nursery and I found the ark just sitting on the table, untouched by the water.”

During the interview, which was broadcasted on local media, Brown can be seen holding the plush artifact, which had no noticeable damage.

“It just gave me chills, when I got to the church and Macy told me, ‘Ms. Delilah, Noah’s ark was saved,'” Delilah King, the church’s nursey director, told WSMV. “Wow, how powerful is our God to give us that hope, that reassurance.”

“There is a lot of beauty and power in that story,” Brown said.

Approximately 271 homes were destroyed in Humphreys County, where the church is located, as a result of the floods, CNN reported on Wednesday.

The floods were triggered when rainwater from heavily affected areas swept downstream along several creeks, according to The New York Times, with meteorologists blaming the short time span it took for the amount of rain to fall.

“It’s unprecedented for three to four inches of rain per hour to fall for three straight hours,” Krissy Hurley, a meteorologist for the Nashville branch of the National Weather Service, told the Times.

Last week, a man in San Angelo, Texas, was pulled from floodwaters as a result of immense rain after he attempted to save a dog that got caught in a strong current.

A similar incident occurred in Tucson, Arizona, during the monsoon rain period, in which three passengers were extracted from a truck after being caught in strong flood currents.