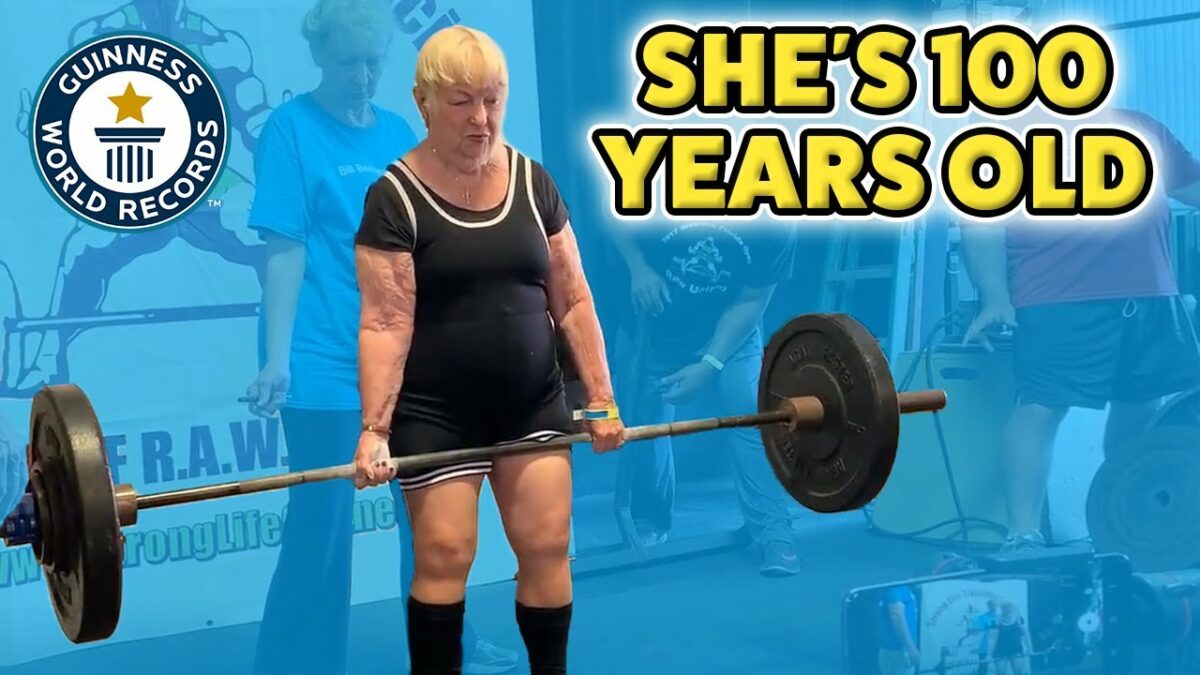 The following article, 100-Year-Old Record-Setting Weightlifter Shares Her Secret to Staying Young: 'I Will Prove That I Can', was first published on Flag And Cross.

Edith Murway-Traina of Tampa, Florida, celebrated her 100th birthday this year by donning a glitzy gold dress, line dancing with friends and enjoying one of her two yearly martinis.

She still lives on her own, has outlived two husbands, and says one secret to long life is humor.

“I have a couple of friends sitting here making fun of me,” she told the New York Post. “That’s how I keep going. If I can make someone smile and laugh, that feels pretty good.”

But she’s also enjoying the title of the Guinness World Record’s World’s Oldest Powerlifter (female). It’s a hobby that she hesitantly stepped into just nine years ago, but since then, she’s been hooked, and it’s kept her active and spry.

“I’m kind of annoying,” she said. “Tell me I can’t do something, and I will prove that I can. That’s more or less or my attitude.”

That same stubbornness came through when her friend Carmen tried to get her to go to the gym with her when she was 91.

“She didn’t want to go by herself,” Murway-Traina told the Post of her friend. “She dragged me kicking and screaming all the way, so that’s more or less how I got there.”

But when she arrived and saw what was going on, she grew curious.

“I saw all these other ladies lifting weights, and it looked interesting,” she continued. “I picked up a couple of weights and had to prove to myself that I could accomplish this.”

Joining the team meant starting to compete, and the great-great-grandmother was reintroduced to something she thrived on: applause.

“As a performer and a dancer, applause was always a very important part of my enjoyment,” she explained. “As long as I could get a little bit of applause, I was happier each I time I got more applause and more applause.

“Once people found out I was in my 90s and I was doing all of these things, it got to be more noticeable. People got to pay attention a little bit more.”

She got stronger. She started bringing trophies home. She amazed spectators with her impressive lifting.

“She bent down and picked it up like it was her purse,” Carmen said of one particularly big lift. “She will not quit and anything that’s hard, it makes her more determined.”

Murway-Traina says she didn’t expect to win anything, but since her first competition, she’s run out of places to put her awards. Her daughter, Honey Cottrell, said though her mother loves lifting, she didn’t brag about it, so the news that she was a world record holder was a wonderful surprise.

“We knew she probably was one of the oldest but were shocked (and very proud of her) to be told she holds a world record,” Cottrell said. “Our entire family is honored that our mother is a record holder, and Guinness World Records has given her this honor.”

“I think in my 90s, I became more aware of the need that people have to be recognized for who they are, or what they are, or how they are, and it’s the most beautiful thing in the world,” Murway-Traina explained. “And I, I think I survive on that, mostly, myself.”

The pandemic threw a wrench in the works for her, but now she’s back at it, hitting the gym several times a week and planning to compete in November.

“The doctors insisted I stop lifting or going to the gym because of the virus, so I backed off for a while,” she told the Post. “Now I am starting from scratch and seeing what I can accomplish.”

“There’s nothing more that I can ask for than to open my eyes in the morning and know God gave me another day. You can’t ask for more than that.”

Continue reading: 100-Year-Old Record-Setting Weightlifter Shares Her Secret to Staying Young: 'I Will Prove That I Can' ...