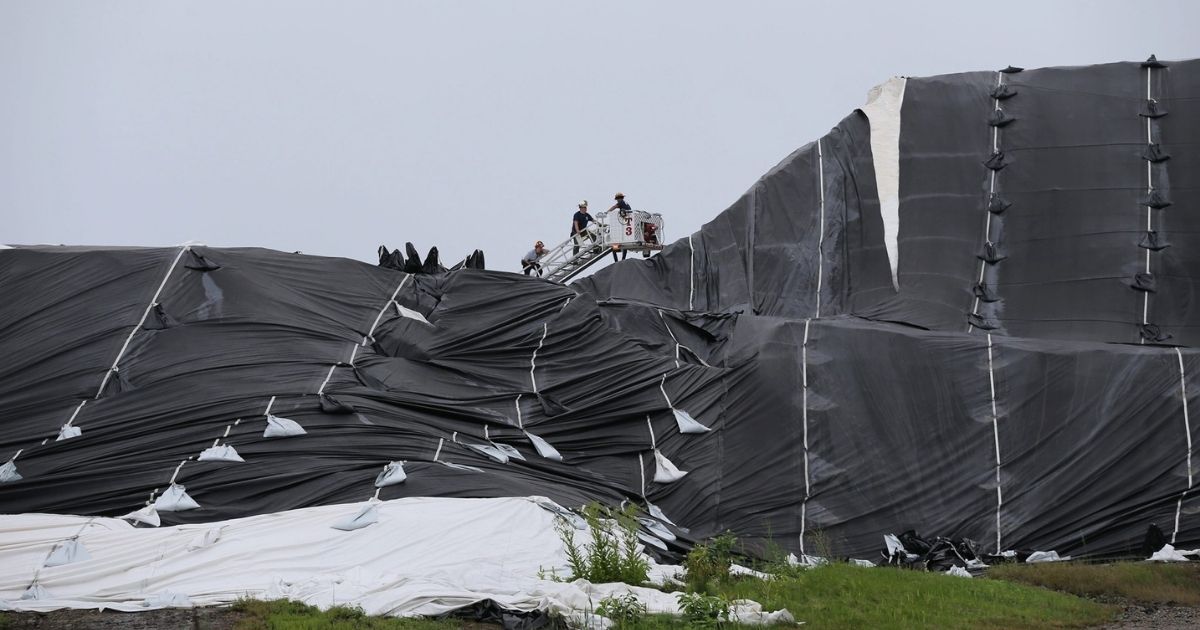 The following article, Rescuers Work for 3 Hours to Save Man Who Fell 25 Feet Into Salt Pile, Unable to Move, was first published on Flag And Cross.

If you have even a hint of claustrophobia — or even just a healthy fear of danger in general — this story will stick with you.

On Monday, in Newington, New Hampshire, a man working on a pile of salt at Sprague Operating Resources was removing the tarps covering the salt in preparation for another delivery when he fell through a hole in the surface.

He ended up trapped up to his waist in the salt, 25 feet below the surface of the pile, in a hole about 18 inches across. According to Foster’s Daily Democrat, rainwater seeped under the tarps and created a hole in the salt pile, which the man had fallen into.

The 43-year-old anonymous worker was conscious, and thankfully a contractor on site noticed what happened and was able to inform the company of the man’s situation.

“There was very little room for him to move,” Fire Chief EJ Hoyt explained.

Since the space was so cramped and the man so constricted, the going was slow. Firefighters planned to send a harness down so the man could hitch himself into it and get hauled up, but he had to free himself first.

So they sent down a single, five-gallon bucket, which the worker used to scoop up the salt around himself. He sent up bucketfuls of salt, one at a time, until he was free enough to move.

It took three hours of painstaking work, but eventually the man was freed from his predicament at 4:47 p.m.

Though the man didn’t seem to be injured, he was taken to a local hospital for an evaluation.

Hoyt recognized and thanked the many responding agencies.

“This is one of those that we could never handle on our own,” he said.

“Newington Fire would like to take this opportunity to thank all of the fire, police and public works departments along with several of our business partners that came out to assist today with a technical rescue,” the Newington Fire Department posted on Monday. “We are honored to have such great partners and neighbors.”

Shana Hoch, spokesperson for Sprague, extended the company’s gratitude as well in an email to Foster’s Daily Democrat.

“We are thankful to the emergency teams from Newington and surrounding fire departments who were onsite supporting the contractor and their employee’s successful extraction from the pile,” she wrote.

Continue reading: Rescuers Work for 3 Hours to Save Man Who Fell 25 Feet Into Salt Pile, Unable to Move ...