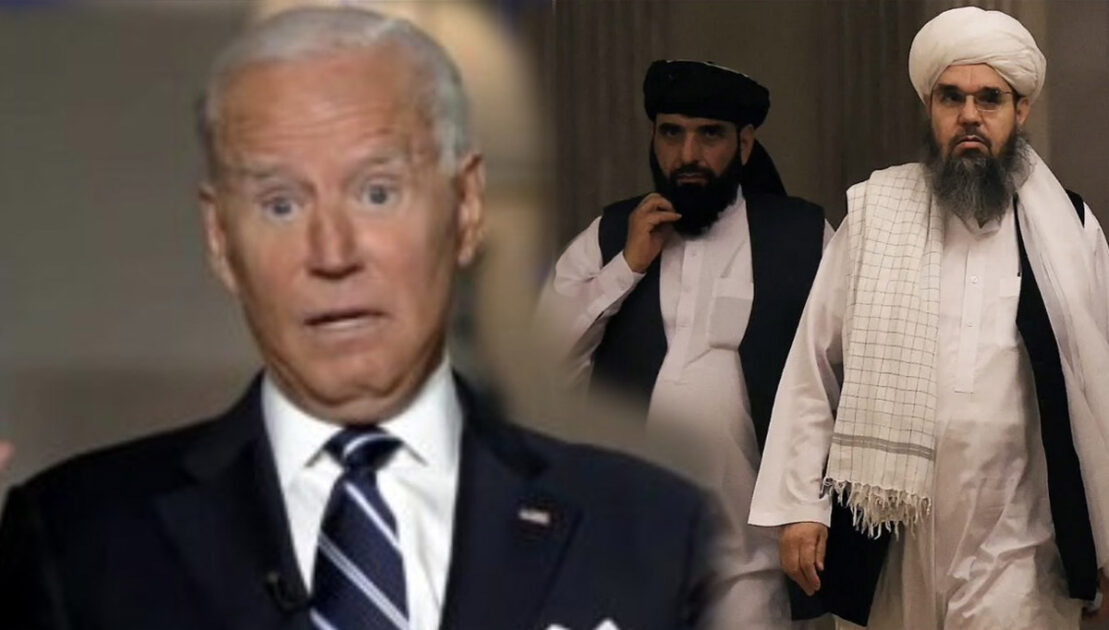 The following article, Joe Biden Has Turned The US Into A Taliban Vassal State, was first published on Flag And Cross.

I am old enough to remember when the U.S. policy was “we don’t negotiate with terrorists.” That policy is long gone, but under Joe Biden, the policy is now “we take orders from terrorists.” Joe Biden is forcing the US and our NATO allies to follow the orders of the Taliban. It’s as if we are now a Taliban vassal state. Biden makes America Taliban vassal.

While we still have a military that is head and shoulders above any other military in the world when it comes to fighting ability, intelligence, courage, and love of country, their Commander-in-Cheif lacks the courage to protect the Americans stuck in Afghanistan or the will to keep our promises to the Afghans who helped the U.S. military in the war.

Keep in mind that the argument is not whether or not we should be leaving Afghanistan. Americans wanted our military out. Obama, Trump, and Biden campaigned on the basis that they would be removing our Afghan presence. However, thanks to the way he’s handled this withdrawal Joe Biden has taken the most powerful nation in the world and turned it into a nation that is no longer trusted by our allies and no longer feared by our enemies. As we approach the twentieth anniversary of the September 11th attacks, the United States is in the most danger of a terrorist attack since 9/10/01, the day before the towers were attacked.

Presidential Press Secretary Jen Psaki admonished Fox reporter Peter Doocy for suggesting that some Americans were stranded in Afghanistan. But twenty-four hours later, it is apparent that Americans and the Afghanis who helped us (along with their families) will be left behind without any protection from the Taliban terrorists.

On Monday, the Taliban announced that they wouldn’t extend the deadline of August 31st. That date was an artificial deadline set by Joe Biden, but that isn’t even the issue. Why the heck do we care what they think. Last I checked, this is the United States of America. We have a narrow objective—getting the people out. Biden sent our CIA director to meet with the terrorists and ask if we could have some more time. Horse Crap! The CIA director should have told the Taliban that America will get out when we decide our mission was done. And if you harm one hair on the head of one American, one European ally, or one Afghans who we intend to evacuate, we will turn the Taliban villages into parking lots.

When Trump was president, he called the Taliban negotiator to tell him that the U.S. knows where his family lives, and if the terrorists screw up, we will blow up his wife and kids. Sounds harsh, but there were no American military deaths after that call.

What is not often mentioned is that our invasion of Afghanistan 20 years ago was the first time NATO implemented their Article 5, which says an attack on one NATO nation is treated as an attack on all. Tuesday morning, Joe Biden had a Zoom meeting with the G7. All the G7 countries are NATO allies (Canada, France, Germany, Italy, Japan, and the United Kingdom) who went to war because America was attacked. Over the past week and during the Tuesday meeting, our allies asked that the August 31 deadline be extended so they could get all of their countrymen out. Biden decided that subjugating America to the Taliban terrorists was more important than helping our allies, protecting Americans, and keeping our promise to the Afghan people who helped our war effort.

WOW: Fox reporting that the G7 had an agreement in place to tell the Taliban the G7 nations would stay in #Afghanistan past August 31, and now Joe Biden has undercut our allies again. pic.twitter.com/tXGoPmA3ln

The Biden administration still doesn’t know how many Americans are in Afghanistan or how many they have evacuated. They also have no plan to ensure Americans are not trapped or incapacitated but have bowed down to the Taliban.

Despite what team Biden tells us, Americans are being beaten, harassed, and blocked from the airport. But instead of rescuing stranded Americans, the Biden administration prefers to pretend they do not exist. Heck, Jen Psaki won’t allow it to be discussed.

Also, on Tuesday, the Taliban announced that they have decided to prevent Afghan citizens from accessing Kabul’s airport for evacuation flights, thus stranding the tens of thousands of people who worked with the militaries of America and our allies, dooming them to the torture and death of the Afghans and their families at the hands of the Taliban. The blood of all the people Joe Biden will be leaving behind will be on his head. And don’t be surprised if the next time the United States asks for the help of our allies, they tell us to shove it because, thanks to our weak president, what was once the world’s only superpower now has the boots of the Taliban on our necks. The pressure of terrorist boots will worsen as ISIS, and Al Qaeda turns their attention to attacking the United States.

Continue reading: Joe Biden Has Turned The US Into A Taliban Vassal State ...

This is what Biden voters and their rigged voting machines said they wanted.
They got what they voted for. The rest of us got ……….. !