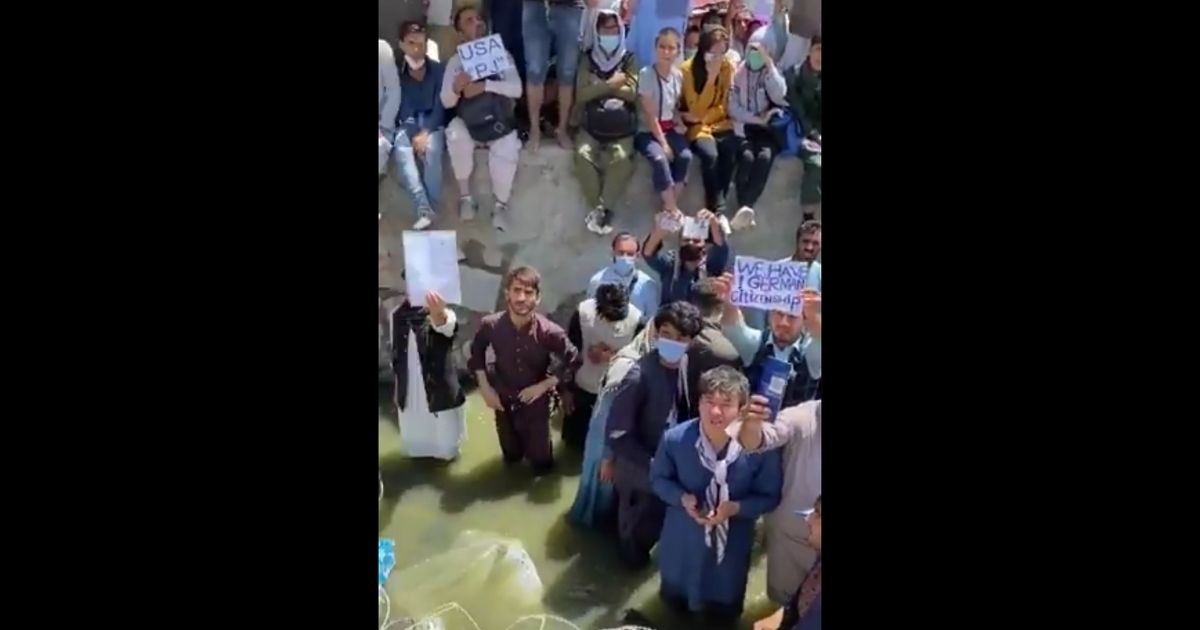 The following article, Biden's Afghanistan: Shock Video Shows People Standing in Knee-Deep Sewage Begging to Be Let in Airport, was first published on Flag And Cross.

As more harrowing footage emerges from Afghanistan of people flooding the streets outside the Kabul airport, the Biden administration’s missteps seem even more consequential.

A video released on Twitter by Ian Pannell, a senior foreign correspondent for ABC News, showed desperate Afghans “begging” to be allowed entry into the Hamid Karzai International Airport.

“Devastating scenes at Kabul airport. Knee deep in sewage, waving their papers, begging to be let in,” Pannell tweeted Wednesday.

In the video clip, there are men and women of all ages, from elderly Afghans to small children, shown with fear in their eyes as the clock is ticking for evacuation from the Taliban-controlled country.

The fact that they are walking in sewage should not be taken lightly, either.

Most people would never voluntarily walk around in filth, making the circumstances of these Afghans unimaginable for those who are blessed to be living in the United States.

The airport has been a chaotic scene for days as thousands of Afghans and foreign nationals are trying to board evacuation flights, with the U.S. troop withdrawal deadline firmly set for Aug. 31.

Many have died as a result, including at least seven killed due to being crushed in the crowds of people on Sunday, according to The Associated Press.

The United States military is scrambling to get its own people out, with an unknown number of Americans still in the country.

White House press secretary Jen Psaki suggested in a briefing Tuesday that the United States might have to leave some Americans behind.

“Our commitment continues to be to U.S. citizens: If they want to leave, we will help get them out,” she said.

“Again, we expect there could be some, but I don’t — I’m not going to get into it further.”

Jen Psaki expects “there could be some” Americans left in Afghanistan after the evacuation deadline of August 31st. pic.twitter.com/Egq7LyDVk5

Hopefully her optimism proves to be true, but it’s highly unlikely.

Pannell’s clip, along with many other videos circulating, indicates a humanitarian crisis in Afghanistan — but the U.S. cannot even begin to think about securely admitting refugees until Americans are taken care of.

Despite the clear problems that have arisen due to the botched troop withdrawal, President Joe Biden appears to believe his administration did everything right.

“I think that history is going to record this was the logical, rational and right decision to make,” the president said in a media briefing on Sunday. Perhaps he should take a look at this footage.

The Biden administration’s withdrawal did not adequately consider the human impact of a rapid Taliban takeover, and it’s potentially leaving thousands of Americans stranded and even more Afghans helpless.