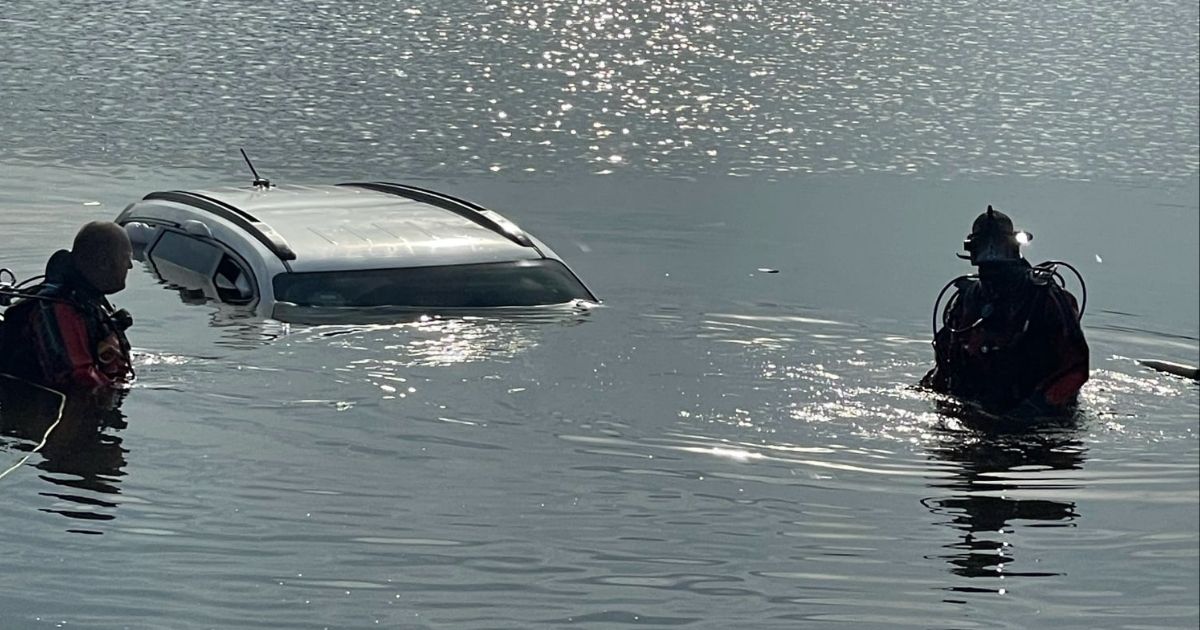 The following article, Police Perform Dramatic Water Rescue After Driver Loses Control and Plunges Deep Into River Below, was first published on Flag And Cross.

On Saturday morning, shortly after 6:30 a.m., in Camden, New Jersey, witnesses spotted an erratic driver veer off the road after hitting a dip.

The car and driver careened down a hill, hitting a sign along the way, and plunged into the Cooper River, where the car quickly began to sink. Thankfully, officers with the Collingswood Police Department were nearby and able to get to the scene quickly.

“Collingswood Officers, Sergeant Ken Jacoby, Sergeant Brian DiCugno, Officer Eric Roseboro and Officer Nick Bruns were first to arrive and observed a vehicle in Cooper River,” the Collingswood Police Department shared on Saturday. “It that was partially submerged and beginning to rapidly sink.

DRAMATIC WATER RESCUE. Saturday morning, a driver lost control and went into Cooper River and nearly drowned. @CollingswoodPd was less than a mile away and officers jumped in, broke the windows, and helped bring the man to safety. @6abc pic.twitter.com/wfywL9gJU4

“The Officers could see a male in the driver’s side window, frantically attempting to pry his way out of the partially open window. It quickly became evident that the male would be unable to free himself from the sinking vehicle. Officers quickly grabbed a rope, a personal floatation vest and an expandable baton from a patrol vehicle and entered the water without hesitation to attempt to rescue the trapped male.”

“It escalated rapidly,” he told WPVI-TV. “It really, it was only seconds that it took a turn from ‘this is bad’ to ‘this is about to be real bad.'”

It took the officers several attempts to locate the driver once they reached the vehicle. Because of deployed airbags and the muddy water, they couldn’t see into the car.

They broke several windows but were unable to find the driver they’d seen moments before.

“Officer Roseboro then arrived at the vehicle and immediately attempted a second rescue through the driver’s window,” the post continued. “Upon doing so, Officer Roseboro located the operator and began to pull him out of the window.

“Sgt. DiCugno and Sgt. Jacoby assisted Officer Roseboro and were able to pull the subject’s head above water, where he took a deep breath, confirming he was still alive. In speaking with the subject, Officers learned that he was the single occupant of the vehicle.”

Even after locating the man, the complications were not over. The driver was stuck on something in the car, and it took another officer joining the three to remove him.

“I reached my arm into the vehicle and I was actually able to feel the victim’s arm,” Roseboro said. “At which time I just grabbed hold of him and I just started pulling him out.

“He took a big gasp of air and at that time we were relieved that he was still alive.”

The Collingswood Fire Department’s water rescue specialists then retrieved the officers and driver, and later the vehicle.

“If it were not for the quick, heroic and lifesaving actions of the Collingswood Police Officers, Sergeant Jacoby, Sergeant DiCugno, Officer Roseboro and Officer Bruns, the outcome of this incident would have surely been gravely different,” the police department shared. “This is yet another example of the proud selfless service we provide the community day in and day out.”

The driver now faces four citations, one of which is for reckless driving. Some of the responding officers needed medical attention for cuts from breaking the windows, but the driver sustained no serious injuries, and authorities confirmed that he was the sole occupant of the vehicle.

Bishop Levi Combs III, who witnessed the accident, had reported it and was impressed with the response time and manner of the Collingswood officers.

“And in that moment, all that mattered was the quality of life,” Combs said. “Saving an individual’s lives. It wasn’t about black or brown or white. It was about someone was in distress in a life-threatening situation, and we’ve got to act.”

For Roseboro, what transpired was just a day in the life of a police officer: “This is why we sign up to be police officers, for days like this.”