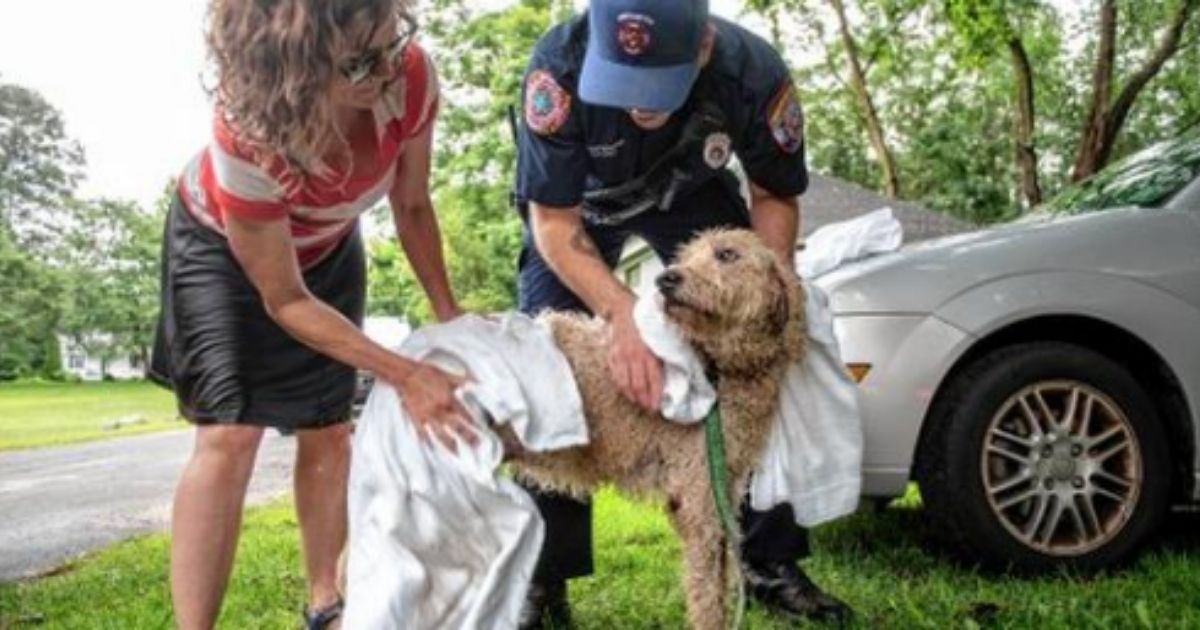 The following article, Firefighters Race to the Rescue After Woman Jumps Into River to Save Senior Dog from Raging Current, was first published on Flag And Cross.

On Monday, a dog walker was taking a 14-year-old goldendoodle named Sienna for a stroll in Northampton, Massachusetts — not all that unusual an activity for the dog, which often frequents the paths alongside the Mill River.

What was unusual was the state of the river, which was much more turbulent than usual thanks to the effects of Tropical Depression Henri. While the storm had seemed to move on, Mill River was much higher than usual.

Somehow, when Sienna went to the riverside to get a drink, she ended up falling in and getting swept off. After receiving a panicked phone call, Sienna’s owner Suzanne Forman raced down to the river and quickly went in after the elderly dog, worried she would drown.

A friend of Forman’s called 911. Northampton Fire Rescue, Northampton Police Department and Massachusetts State Police were all quickly on the scene and worked together to rescue Forman and Sienna, who were holding onto a tree to keep from being swept away.

“Around 9:30am this morning, units were dispatched to the Mill River behind Maines Field for an individual and dog that were swept away in the current,” the Northampton Fire Rescue posted on Monday. “Upon our arrival, the individual and dog were holding onto a tree that was across the river, unable to fight the current to the shore.

“As a reminder, water levels are still high in our streams and rivers. We did not get the expected heavy rainfall from Hurricane Henri, but we have had an exceptionally wet summer. Please stay clear of any bodies of water at this point in time. More rainfall is still expected, which will exacerbate the issue. Again, please avoid the rivers and streams in our area!”

After being rescued, Forman made sure to tell her rescuers, “you guys are the best.”

“This is what they train for,” Northampton Police Detective Sgt. Corey Robinson said of the rescue team. “He was able to rescue her and the dog relatively quickly.”

After people made less-than-compassionate comments without knowing much about the situation, Forman also posted on the fire and rescue’s post to explain a little more about what had transpired.

“I’m the person and dog owner who was rescued so quickly and beautifully by our wonderful rescue teams!” she wrote.

“I’m so very thankful. I’m also forever grateful to my anonymous friend who called 911 when I realized while trying to rescue my dog that I could keep her head out of the water, but I couldn’t get us out of the river.

“We are home, and my sweet elderly dog is doing well. And I appreciate those of you who guessed correctly that we weren’t there to take a swim.”

Thankfully rescue teams were able to get to Forman and Sienna before anyone was injured, and hopefully Sienna’s future walks won’t be quite so exciting.

Continue reading: Firefighters Race to the Rescue After Woman Jumps Into River to Save Senior Dog from Raging Current ...