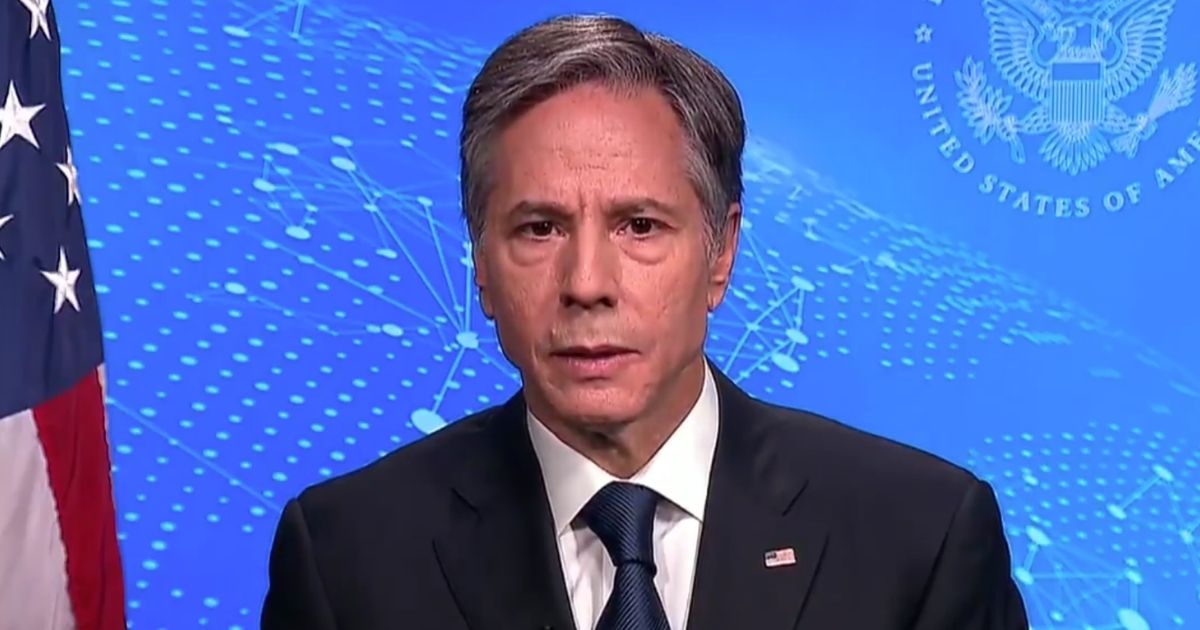 Does President Joe Biden’s fogginess rub off on people after a while? Asking for Secretary of State Antony Blinken.

Blinken may be establishment city, the kind of claret-sipper who comes across like he thinks blue-collar means someone who had to settle for Middlebury instead of the Ivy League. However, you wouldn’t call him daft. Dull, hazy, inexact, bumbling, ineloquent, dim, diminished — none of these adjectives would usually appear in copy about Blinken.

The last two weeks haven’t been kind to Blinken or anyone else in proximity to the foreign policy and humanitarian disaster in Afghanistan, but no one would ever say Blinken wasn’t up to the job. The wrong man for it, sure — but that’s if you’re a conservative. If you’re the kind of person who thought John Kerry knocked it out of the park the last time a Democrat was in a position to get a secretary of State confirmed, Antony Blinken was your kind of blandly pompous (but reasonably sharp) elitist.

Blinken was confirmed mere days after Joe Biden was inaugurated. That means he’s spent eight months with our befuddled president as his only direct superior. During that time, our secretary of State has apparently regressed to the point where, during the biggest crisis his boss has faced, he can’t seem to remember the name of the president of the country which has precipitated that crisis.

Blinken appeared on CBS News’ “Face the Nation” on Sunday where he had to face some uncomfortable truths about how far gone the situation in Afghanistan was. One of those truths? The U.S. was negotiating with the Taliban to ensure safe passage for our own citizens to get to the airport and leave the country.

“Face the Nation” host Major Garrett noted this could sound to the average American like “we have to ask the Taliban for permission for American citizens to leave. True or not true?”

“They are in control of Kabul. That is the reality. That’s the reality that we have to deal with,” Blinken said.

When asked how comfortable he was with this, Blinken didn’t answer, instead patting the administration he works for on the back for doing a good job under the circumstances. After all, nobody saw this coming since the president of Afghanistan had avouched he would “fight to the death” before deciding a flight to Uzbekistan would be a better option.

“My — what– I’m, what I’m focused on, what we’re all focused on is getting people out and making sure that we’re doing everything possible to do that,” Blinken said. “And in this case, it is, I think, a requirement of the job to be in contact with the Taliban, which controls Kabul.

“And, look, what we’ve seen, Major, is — is — is also pretty remarkable. Go back a week. The government fell. And, by the way, I was on the phone with President Karzai the day before when he was telling me his intent, as he put it, to fight to the death. Well, the next day he was gone. The military collapsed.

“And in the space of that week, our military went in, secured the airport, got our embassy to safety at the airport from the embassy compound, began this remarkable evacuation effort,” he added.

.@SecBlinken says U.S. contact with Taliban has been “very important to making sure that we can actually advance our own interests in getting people out safely and effectively as possible”: “They are in control of Kabul. That is the reality.” pic.twitter.com/Via2dhdbIu

That’s President Hamid Karzai who he said he was on the phone with the day before the government fell and the military collapsed. After that, they went in and, among other things, secured the airport.

US @SecBlinken: “I was on the phone with Pres Karzai [sic] the day before, heh, when he was telling me his intent, as he put it, ‘to fight to the death.’ Well, the next day he was gone.”

Karzai left the office in 2014. It was Ghani who fled his country.pic.twitter.com/Sr5mBgYctb

Instead, as BBC Persian senior producer and reporter Hadi Nili pointed out, it was President Ashraf Ghani who decided it was high time to Ferdinand Marcos his way out of Kabul before the Taliban took the city by force.

This is, by the way, a BBC producer tweeting it. This isn’t a writer for National Review or the Daily Caller tweeting this one out. It’s a producer for the state-run public broadcasting behemoth of Merrie England, not usually known to turn a critical eye on the men and women of our Democratic Party.

Blinken’s mistake didn’t come in a vacuum. Beyond the parade of errors that’s marked our ignominious exit from Afghanistan, Biden’s gaffes and incompetence are the same as ever — except they’re no longer funny.

Here’s a man who, on Friday, told reporters regarding reports of Americans who couldn’t escape Afghanistan that they’d seen “no indication that they haven’t been able to get, in Kabul, through the airport.”

Just imagining the despair of the American contractor who DM’d us just yesterday that he‘s been trying to get to the airport for DAYS but can’t get through the Taliban & can’t reach anyone at the embassy, as he watches @JoeBiden utter this shameful lie. pic.twitter.com/cwi1EM1wWn

Not long after that, Secretary of Defense Lloyd Austin acknowledged during a briefing of his own that the administration was “aware that some people, including Americans have been harassed and even beaten by the Taliban” at checkpoints while trying to get to the airport.

Austin’s full quote on Taliban beatings during the House briefing, relayed to us by multiple sources:

“We’re also aware that some ppl including Americans have been harassed & even beaten by the Taliban. This is unacceptable & [we] made it clear to the designated Taliban leader.”

So here’s Antony Blinken — the consummate elitist, mentally fit, sharp as a tack, the guy who should be cleaning up after Joe Biden’s multifarious messes and reassuring the American public.

And he can’t even remember who the president of Afghanistan was.

Joe Biden rubs off on a fellow pretty quick, tragically.