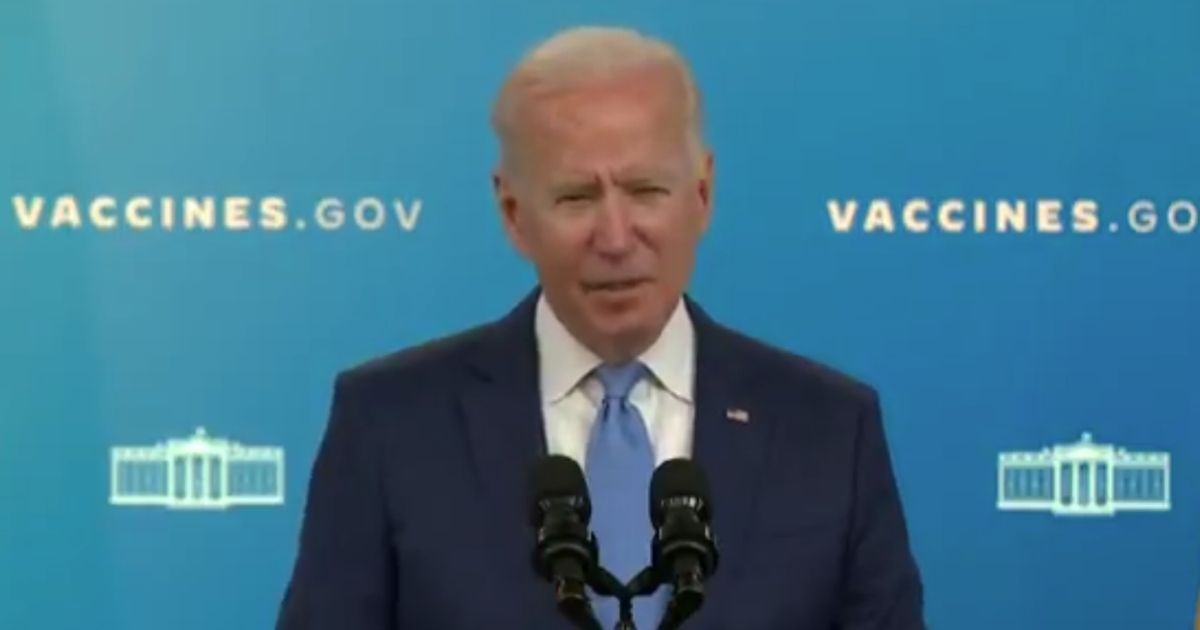 The following article, Watch Biden Flub Vaccine Web Address, Then Get Stuck Repeating It, was first published on Flag And Cross.

He has a hard time with the newfangled technology that’s been around for a mere quarter-century.

We all remember the moment when, during the presidential primary debates, he directed his followers to “go to Joe 30330” with all the confidence of a nursing home resident navigating her very first Jitterbug phone.

That was to be the first of many such senior moments for the elderly now-president, who fumbled, mumbled and squinted his way down the campaign trail — and by that I mean gave cable news interviews from his basement with the questionably helpful assistance of a teleprompter.

His presidency has been no different. It’s almost expected whenever he makes public appearances that he’ll lose his train of thought, stumble over his words or reveal that he gets scolded by his handlers if he takes too many questions from the press.

And of course, his foibles with technology keep coming up.

Although aircraft boarding steps might predate even Biden himself, the one he used to board Air Force One has certainly posed a challenge, and whoever runs the livestream set-up at the White House definitely messed something up at the exact moment when Biden offered to take questions from House Democrats earlier this year.

Meanwhile, when Biden is permitted to speak in public by his ever-vigilant staffers, merely reading off the name of a website has proven to be a challenge on more than one occasion.

On Monday, President Joe Biden directed Americans to visit the website “Vaccines.com” not once but twice in the period of less than five seconds, when the website he was meant to be instructing us to visit is “Vaccines.gov,” as is consistent with virtually every single official government website.

Biden tells Americans to go to “https://t.co/WPZrK1bAw6” TWICE instead of the actual website https://t.co/kCUjiBfPdOhttps://t.co/67Ju2qAaqi is literally displayed right behind him pic.twitter.com/RHEv0rdno2

At the time, he was standing immediately in front of what appeared to be a special background created for the occasion that clearly read, “ Vaccines.gov.”

We can also assume that this is what the teleprompter before him read as well.

To be fair, this is a better look than that time he told Americans to visit “Vaccines.gum,” when of course, .gum isn’t a thing at all.

In that case, Biden quickly caught his mistake and corrected himself to “.gov,” although for some reason then just repeated “Vaccines.gum” before moving on to encourage Americans to “text … to … your zi — text your zip code to th — 438829.”

Joe Biden can’t even read off a teleprompter. This is SO bad. pic.twitter.com/R2AweBKmkl

It’s fitting that the term “cringe” has become an adjective in the Biden era because that’s exactly what this is.

Just a few weeks ago, Biden was also confidently saying that 350 million Americans had been vaccinated, which is well over the entire population of the United States.

He uttered this glaring error twice as well, without appearing to notice that he had said a number that far exceeded the population of the country he has been elected to lead.

Listen, we all make mistakes, we all fumble words, we all screw up at work sometimes.

We have not all, however, been elected to lead the most powerful nation on earth and we do not all routinely display symptoms of senility and early-onset dementia.

President Joe Biden has and does.

And were he doing a spectacular job running the country while fumbling over his words and appearing clueless in public, perhaps we could forgive his quirks and mistakes.

He is not doing a spectacular job, however.

The economy is precarious at best. Constitutional rights are at serious risk. Afghanistan is a complete and utter failure. The border is a disaster. These are all crises with a real human cost.

His foreign policy, military leadership and radical ideology already display massive weakness to his own people as well as our enemies overseas.

The fact that he doesn’t go a week without issuing forth further evidence that his cognitive health is wanting is just the final straw.

This administration and its president are letting the American people down in a way they’ve never been let down before, and “embarrassing” doesn’t even cut it.