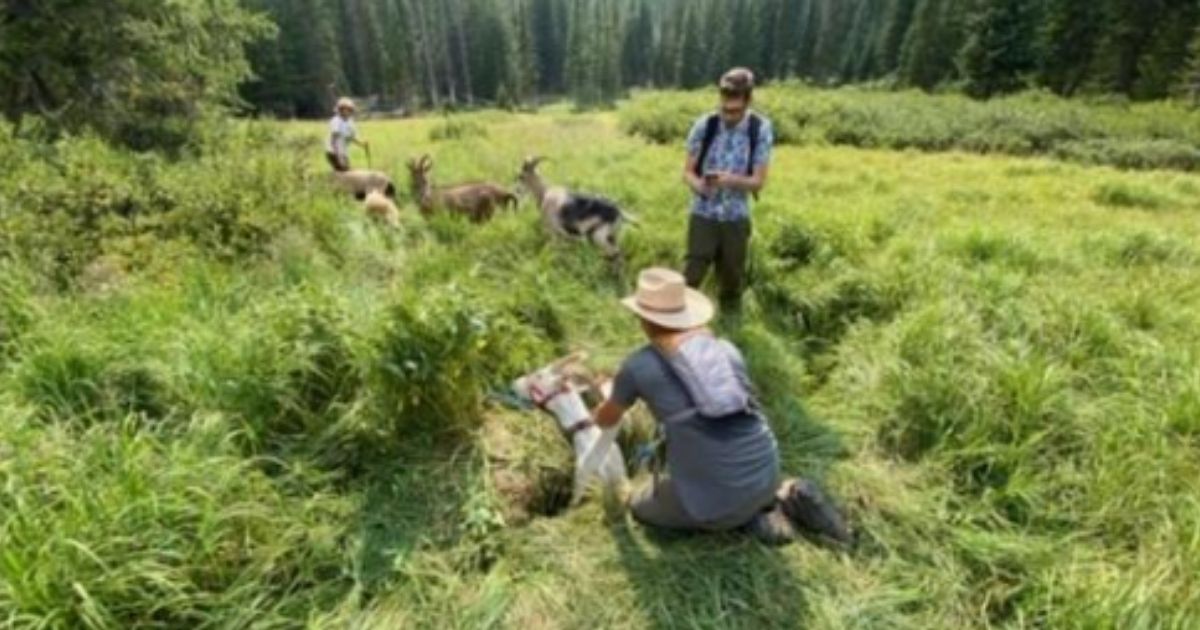 The following article, Men Race to Rescue 300-Pound Pet Goat That Fell Into Ditch on Hiking Trail: 'It Looked Very Serious', was first published on Flag And Cross.

It’s not every day that someone getting your goat is a positive thing, but last week a woman was very thankful for just that.

The woman — who has remained nameless — was out enjoying nature along with a 68-year-old woman, two children, and her goats in the Flat Tops Wilderness Area in Colorado, according to Sky-Hi News.

At some point, one of the goats (which she’d raised from just weeks old) fell into a ditch and was unable to rejoin the group. There wasn’t much the woman could do on her own to help, as the animal was a respectable 300 pounds.

Seeing no way to remedy the situation personally, the woman ran for the parking lot to find someone who could drive her to where she could get cell reception and call Routt County Search and Rescue.

“I need help,” she said when she approached two men who’d just completed a grueling hike.

The two hikers, a Colorado resident named Chris Bailey and a visitor from Florida named Brian Gleason, thought their accomplishments were over for the day — but they immediately grew concerned when the frantic woman asked for help contacting search and rescue.

“When you’re in the middle of the wilderness and someone asks you to call search and rescue, that means it’s pretty serious,” Bailey said.

They certainly weren’t expecting the explanation they got when they pressed her for more information.

“If someone’s asking for your help and you know they’re sincere, we’re not going to say no and go back home,” Gleason added. “It looked very serious.”

The woman had certainly run into the right people at the right time, as both men compete in Ironman Triathlons and enjoy weightlifting. They also both own dogs, making them sympathetic to the woman’s pet-in-distress plight.

With the help of another good Samaritan they picked up along the way, the group decided to try handling the situation themselves first, collecting some straps and heading to assess the goat situation.

With the three men using the straps and holding onto the large goat’s horns, they managed to free the wayward creature. Now they had two accomplishments to go home and celebrate.

“If something like that doesn’t make you feel good as a person,” Bailey said, “I don’t know what does, and that’s why we did it.”

“It was as rewarding and satisfying for us as it was for her to get the animal out,” Gleason explained. “It’s the feeling that you made a difference in someone’s life and you saved a life.

“We’re not trying to be heroes, we just did it because she asked and she needed help. You don’t say no when someone’s asking you for help like that.”

Gleason also added they were happy their efforts were successful, as they knew time was of the essence: If they waited for a search and rescue team, they might have lost their light, seriously complicating matters.

The search and rescue group for the area also recognized the mens’ actions, commending their efforts and ability to rectify the situation themselves.

“Self rescue is the best kind of rescue!” Routt County Search and Rescue posted on Facebook, along with a share of the story.

“Kudos to these good samaritans for helping out.”