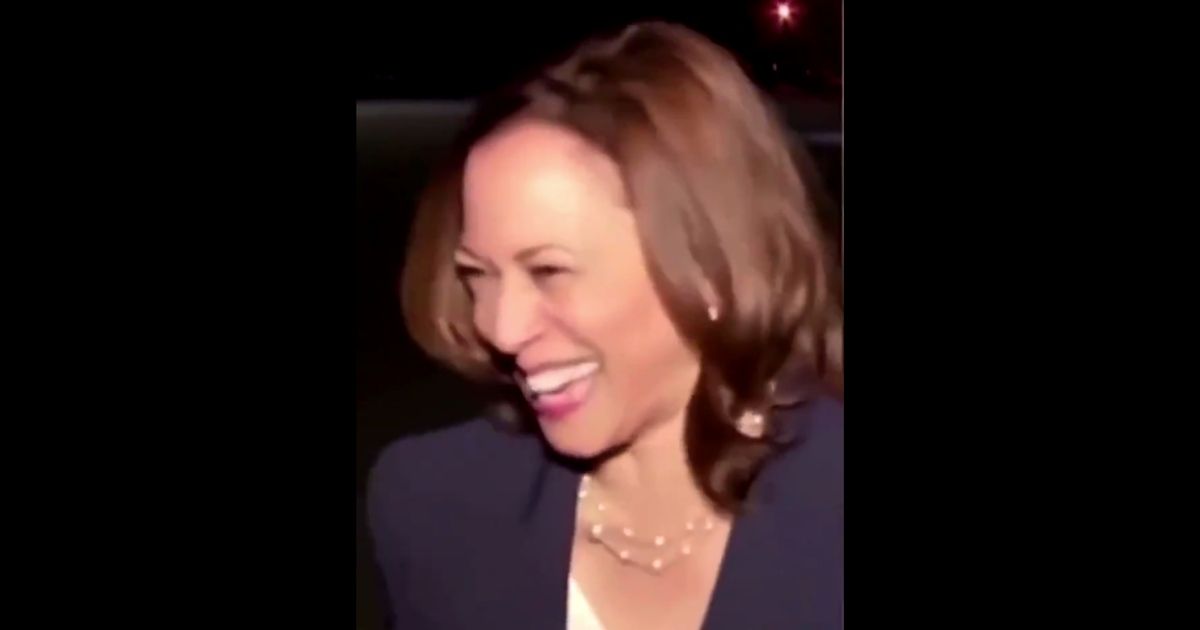 The following article, Kamala Harris Bursts Into Ghoulish Laughter When Asked About Deadly Afghanistan Disaster, was first published on Flag And Cross.

Thanks in large part to the Biden administration, Afghanistan is a complete disaster area. Yet as desperate American citizens and allies scramble to escape the Taliban, Vice President Kamala Harris apparently thinks there is something to laugh about.

According to the New York Post, Harris approached a group of reporters Friday with a grin on her face. As some reporters began shouting questions about the crisis in Afghanistan, Harris promptly cut them off.

“Hold on, hold on — slow down, everybody!” she said before unleashing her infamous cackle.

WATCH: Kamala Harris laughs when a reporter starts to ask her about Americans trapped in Afghanistan pic.twitter.com/7863Seq36C

“I want to talk about two things — first, Afghanistan,” she continued.

“We couldn’t have a higher priority right now, and in particular, our priority is making sure that we safely evacuate American citizens, Afghans who worked with us, Afghans at risk, including women and children, and that is one of our highest if not the highest priority right now.”

There are multiple issues with this interaction. The most obvious one is that the subject matter is not at all appropriate to laugh about.

Admittedly, Harris is probably laughing either out of nervousness or because of how eager reporters are to ask questions. It seems unlikely that she was laughing as a direct response to the crisis.

Even so, her smiley disposition as she approached reporters is inappropriate given the severity of the situation. As a prominent political leader in America, she ought to know how to conduct herself in a professional manner.

In addition, Harris’ actions do not fit her words. As she was talking about Afghanistan being a “priority,” she was making her way to southeast Asia for largely unidentified reasons.

Harris was scheduled to stop in Singapore and Vietnam for what CNN called “a once-low-risk trip to friendly nations.” Instead, the journey is now drawing comparisons to another botched U.S. military evacuation.

Ahead of the trip, Harris’ office attempted to quiet comparisons between the fall of Kabul and the 1975 fall of Saigon, the New York Post reported.

“We don’t want to get bogged down in the historical comparisons,” a senior Biden administration official said.

“As Defense Department Spokesman [John] Kirby said the other day, or yesterday, you know, we’re not focused on the history of the Vietnam War. We’re focused on what’s going on today in Afghanistan and doing everything we can to have the most successful outcome.”

Of course, it would be convenient for the Biden administration not to focus on historical comparisons considering Biden himself promised the withdrawal of U.S. troops from Afghanistan would not resemble the fall of Saigon.

“The Taliban is not the south — the North Vietnamese army,” Biden said in a July 8 news conference. “They’re not remotely comparable in terms of capability.

“There’s going to be no circumstance where you see people being lifted off the roof of a embassy in the — of the United States from Afghanistan. It is not at all comparable.”

Fast-forward a little over a month, and U.S. citizens are being evacuated via helicopter from Afghanistan in an eerily similar fashion to the disaster in Saigon.

As the Biden administration attempted to distract from this PR nightmare, the vice president is headed to the exact sight where the original disaster took place. That’s a pretty tough look.

Once again, there is nothing remotely funny about innocent citizens becoming endangered. But in a bit of dramatic irony, it looks like the proverbial last laugh won’t be coming from Harris.