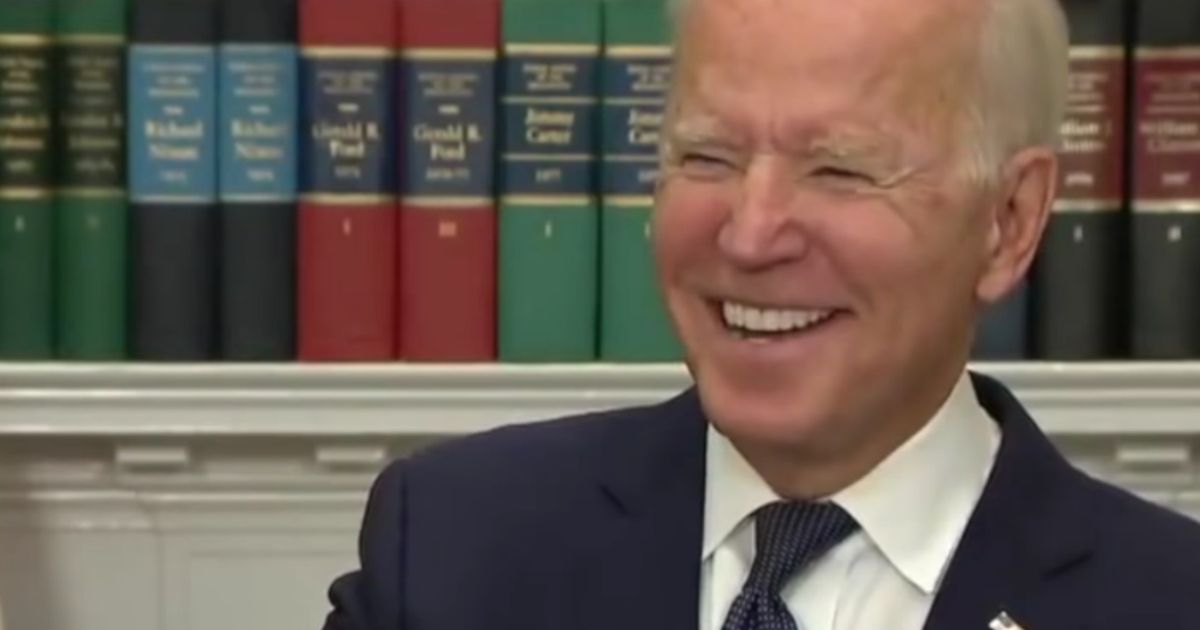 The following article, Biden Has Inappropriate Outburst of Laughter When Confronted by Reporter on Afghanistan, Bad Poll Numbers, was first published on Flag And Cross.

Many of us are asking that question in light of the Taliban’s Afghanistan takeover (during which Biden fled Washington for another vacation) — not to mention amid the COVID crisis, rising inflation, record job vacancies and more.

In light of it all, it’s easy to see why his poll numbers are slipping.

But when CBS reporter Ed O’Keefe pressed Biden on the Taliban and these slipping poll numbers, giving him the chance to redeem himself at least a little during a mini-news conference from the White House’s Roosevelt Room on Sunday, what does he do?

He laughs it off, of course.

“Because the United States is now negotiating with the Taliban over airport access and such, do you now trust them?” O’Keefe asked.

He then followed up his question with another. At this point, Biden was smirking a little.

“And then, a question on the public response. A new poll out today shows Americans wanted to withdraw from Afghanistan, but they disapprove of the way you’ve handled it.

“The poll also found that based in part on what’s transpired in the last week, the majority of Americans and, forgive me, I’m just the messenger, no longer consider you to be ‘competent, focused or effective in the job.'”

Biden cracked a grin during O’Keefe’s spiel, and, once he finished, said, “I haven’t seen that poll.”

“It’s out there,” O’Keefe assured him. “From CBS this morning.”

To which Biden responded with a dismissive headshake and callous, patronizing laughter.

Is this a joke, a game to him? Are Americans his game pieces?

It really should come as no surprise considering his closest comrade — Vice President Kamala Harris — displayed her own concern for the Afghanistan crisis by laughing.

At his insistent dismissal, O’Keefe fired his next question: “What would you say to those Americans who no longer believe you are fit for the job?”

He went on to discuss the wounded and the casualties suffered during the war, a red herring response considering he could have easily discussed why the Afghan pull-out was so poorly executed instead of why it was executed in the first place.

Some commenters on the video thread even seared him for the fallacy.

“Ending the war and withdrawing is not the problem. It’s how [he] did it backward and wrong,” one said.

“What a inept response… no one is saying we should stay… but what the h*** is he talking about? Bottom line.. you don’t pull out the military until after the Civilians are out!” another said.

The New York Post’s Miranda Devine also remarked that the problem lies with “the incompetence of the withdrawal,” rather than the withdrawal itself, citing “the premature closure of Bagram Air Base, placing our troops in an impossible position, needlessly endangering lives of American citizens and Afghan allies, and leaving billions of dollars of weaponry in the hands of our enemies.”

Devine also referenced Biden’s flawed logic that pulling out of the country would’ve proved difficult regardless of circumstance.

“The evacuation of thousands of people from Kabul is going to be hard and painful no matter when it started,” Devine quoted Biden as saying. “It would have been true if we had started a month ago, or a month from now.”

The pundit went on to call the president’s claim “pure gaslighting,” and saying, “of course it would have made a difference if the evacuation had been done while the US military still held Bagram, before the Taliban took Kabul. Whom is he kidding?”

I second her opinion, and I’m sure many others would as well.

But Biden maintains that his move — regardless of its poor execution — was the best decision he could’ve made.

“I think that history’s gonna record this was the logical, rational and right decision to make,” he said later in his response.

I daresay the polls tell a different story.

O’Keefe’s question was one of the four that Biden answered during the briefing, which occurred exactly one week after Kabul tragically fell to the Taliban.

Since that Sunday, we’ve seen heart-wrenching images of the still-escalating tragedy: U.S. diplomats frantically evacuating the Kabul embassy, Afghan citizens clinging to planes and falling to their deaths and those who’ve been left behind as the collateral of this conflict crying in the wake of Islamic militant oppression.

No, Biden can’t laugh this one off.

But that won’t stop him from trying.