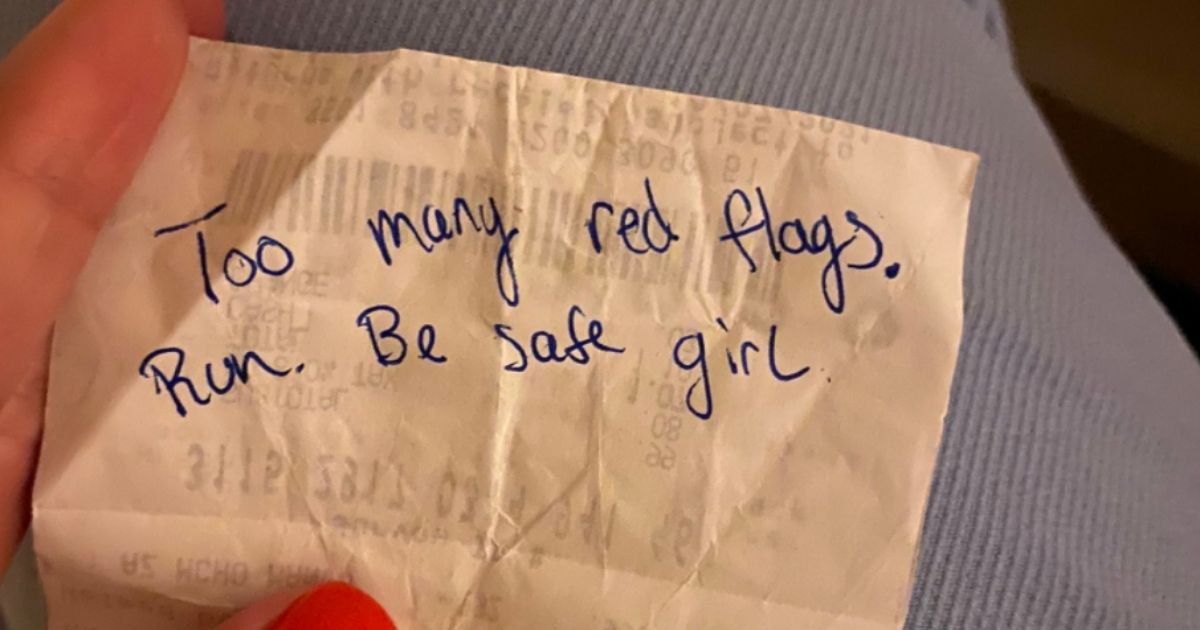 The following article, Stranger Passes Disturbing Note to Woman on Date, Tells Her to 'Run', was first published on Flag And Cross.

For a nerd like me, a rousing debate sounds like a lovely activity during a first date, but I know I’m the exception.

Unfortunately, a Virginia woman, Hadia S, was having a bad date last weekend, and she wasn’t the only one to notice that things weren’t going great. A stranger sitting behind her slipped her a note with a warning of “Too many red flags. Run. Be safe girl.”

I had coffee with a guy yesterday. When he went to the bathroom, the gay guy sitting behind me passed me this note

The Daily Mail reported that while the advice was well-received, Hadia had noticed red flags herself and was prepared to press on with the date.

I recognized the red flags, but I wasn’t in danger, so I stayed, because of course I had to debate him. I’m sure my guardian angel was exhausted and was like “BITCH, LEAVE!”

The reason for the disagreement? According to Hadia, the two not-so-lovebirds had contrasting opinions on the rapper DaBaby, and Hadia was alarmed at her date’s embrace of dating guru Kevin Samuels.

Ok, I’ll share more..while trying to remain as vague as possible. But we did not see eye to eye on the Da Baby situation

and he’s a Kevin Samuels fan. I had to look him up and was immediately taken aback lmao

Among other degrading statements, Samuels encouraged a woman on his YouTube show to accept a man’s cheating because she was built like an NFL running back. Samuels also claimed it is in man’s nature to commit adultery.

That’s not OK. I would be concerned, too, if I were Hadia.

Fortunately, she made it clear that the advice from the note was well-appreciated and that there will not be a second date.

There were a few other GLARING red flags that I won’t mention, but don’t worry, I would have recognized them with or without the note. But the note was greatly appreciated and added some laughs to my night. There won’t be a second date

I admire her tenacity, but the consequences of sticking the date out could have been much worse under different circumstances. After all, this was only a first date.

This guy could have had extremely violent tendencies or reacted poorly to being disagreed with, and Hadia would have had no way of knowing. She is lucky this incident can be filed under “bad” date as opposed to something far more sinister.

As for the Good Samaritan, or the “guardian angel,” as Hadia put it, he did the right thing.

It’s obviously rude to inject yourself into other people’s business under most circumstances, but if you think something is truly wrong, there’s no harm in at least slipping a note.

We all have bad dates, and some are worse than others. In the grand scheme of things, someone with bad values is on the low end of the spectrum.

Fortunately, a helpful note made Hadia’s day a lot better.