The following article, Poll: Most Voters Deem Biden to be Unfit to be President, was first published on Flag And Cross.

Less than 40 percent of likely voters believe that Joe Biden is not fit to serve as president, according to a poll released last week on the heels of the president’s failed policies in Afghanistan.

The Rasmussen poll released on Friday found that only 39 percent of respondents felt that Biden was doing a good job as president.

More telling, 51 percent felt that other people are making the decisions for Biden and he has little to do with actually running the country. That is a big drop from a poll in March when the response was split 47-47.

Indeed, another poll has found that Joe Biden is under 50 percent approval in all but six states.

According to a recent Civiqs poll, Biden is now underwater in all but some of the most liberal states: 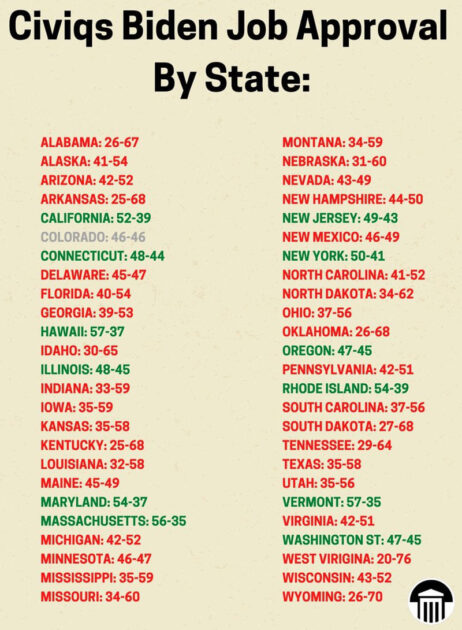 Biden is in some serious trouble.

Continue reading: Poll: Most Voters Deem Biden to be Unfit to be President ...

I would suggest that most Voter think Biden is unfit to continue Living! Thousands of our Men and Women were sacrificed for nothing!