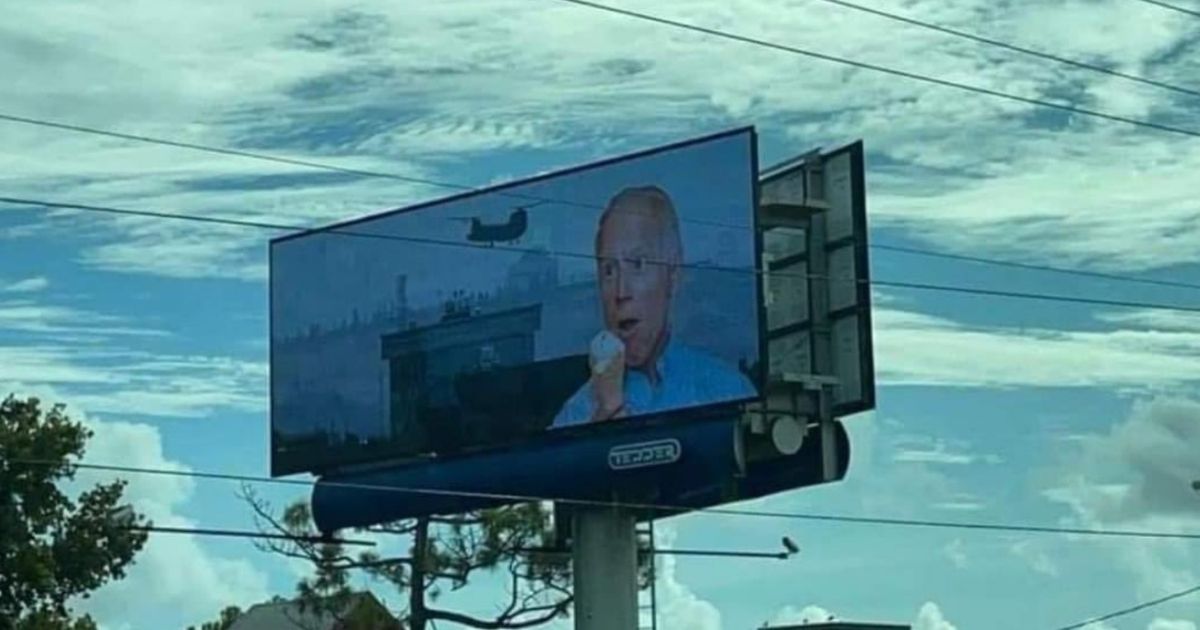 The following article, Photos: Ice Cream-Eating Biden Trolled by Anonymous Billboard Buyer for His Afghanistan Failure, was first published on Flag And Cross.

This week, a billboard in Wilmington, North Carolina, went viral after displaying images that brutally mocked President Joe Biden and his horrifically bad management of the Afghanistan crisis.

Two spots on the rotating billboard featured memes, one of which showed Biden happily eating an ice cream cone as a Chinook helicopter airlifted American personnel from the Kabul embassy in the background. The other showed our commander-in-chief peeking through blinds, indicating he is hiding from what is now easily the lowest of the low points of his presidency so far.

Someone put a photo of Joe Biden eating ice cream in Afghanistan on a billboard and it’s just gorgeous https://t.co/kcpQAvDuAo

Local news outlet WECT-TV confirmed that the billboards were not hacked but paid for by an undisclosed buyer.

WECT hilariously reported, “What the two images are trying to convey is not clear.” In reality, it doesn’t take any kind of analytical genius to see that the message was as clear as crystal: Biden is a joke, and he has been twiddling his thumbs and hiding from his failure as Kabul descends into chaos with thousands of Americans still stuck there.

A Digital Billboard in Wilmington, NC on Racine and Eastwood Ave.

This is on a billboard in Wilmington North Carolina

The billboard is located on the corner of Market Street and Eastwood Road, a busy intersection through which over 65,000 vehicles pass each day, according to Biz Pac Review, which makes it the second busiest in the city.

BPR noted that although former President Donald Trump won New Hanover County, where Wilmington is located, by over 4,000 votes in 2016, Biden won it in 2020 by just 2,400 votes. Wilmington has a population of nearly 120,200.

Tedder Outdoor Media, which owns the billboard, confirmed to WECT that the spots were purchased but declined to provide details as to who paid for them, citing privacy concerns. The company has sold spots to groups from both sides of the political spectrum, including radical animal rights group PETA.

Owner Donald Tedder told the outlet that he would have displayed boards that praised the president and that this was simply another business transaction for him. Fair enough!

The Biden-bashing images first appeared as POTUS was conducting what would turn out to be ill-fated damage control before the American public.

Originally on vacation when Kabul fell, the president had promised that prior to Sunday’s siege of the Afghan capital, we would not see helicopters airlifting personnel from the U.S. embassy as we did when Saigon fell — when that is exactly what ended up happening, with eerie similarity to 1975’s disaster.

He watched the scramble to evacuate Americans from Taliban-overridden Kabul from Camp David on Sunday, before returning to Washington, D.C., on Monday to tell the public that while “the buck” stopped with him, what happened was also totally the fault of the Afghan military and also Trump (because of course it was).

Then, later in the week, he angrily refuted questions about desperate Afghans clinging to and falling off military planes that had taken off from the Kabul airport by saying “that was four days — five days ago!”

It had been two days, as it happened, but his response was as clueless as it was callous regardless of when the heartbreaking scene took place.

On Friday, things didn’t get any better as Biden once again addressed the nation, which he told that Americans were not having any problem getting to the airport and that his administration was in “constant contact” with the Taliban terrorists who are now calling the shots, as though they were ally forces working toward the same end.

Comments from his own Secretary of Defense Lloyd Austin and multiple reporters staunchly refuted this bald-faced lie, pointing to multiple instances of Americans being beaten by Taliban fighters when they tried to access the airport.

Meanwhile, European forces are swiftly and tactfully entering Taliban-controlled zones to retrieve their personnel — something that the U.S. military is beyond capable of doing, and yet for some reason, the Biden administration continues to insist cannot easily be done.

I’m not really sure why anyone would be confused about the message behind this billboard.

Since entering office, Biden has done nothing but wander around cluelessly, read off pre-prepared comments, worry about getting in trouble with his own staffers and spout off whatever nonsense comes into his head when confronted with the media.

The same media, which was more than happy to fawn over his consumption of ice cream a few short months ago, hasn’t even been able to hold back this time around.

The American people are angry, the Afghanistan crisis is a mess that will forever blacken Biden’s name and our country has no leader.