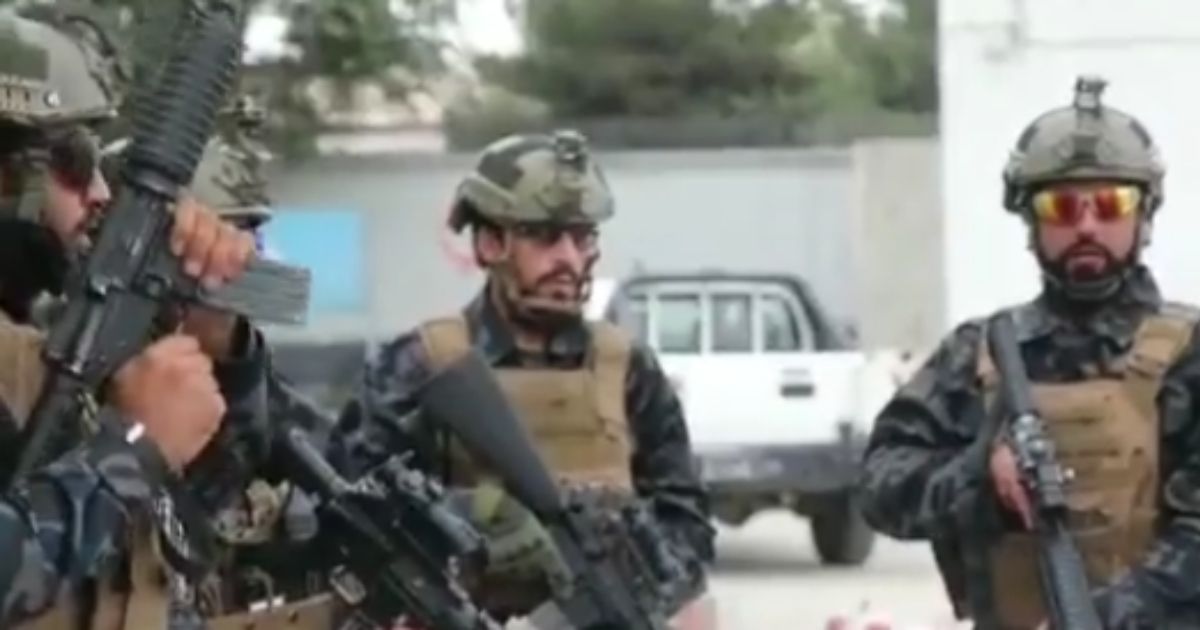 Two images crumbled during the fall of Afghanistan: how we view the Taliban and how the world views us.

When Taliban soldiers once came to mind, we thought of “the typical Salwar Kameez [tunic] and AK-47 slung over the shoulder,” as the Daily Mail put it. Usually, they were seen stuffed into the bed of a Toyota pickup truck wearing “the usual turban.”

Now, the Badri 313 battalion is showing how much the Taliban has changed since the group last held power in 2001 — and it helps explain why countries like the U.K. are furious at President Joe Biden for letting Afghanistan fall.

According to the Daily Mail, the Badri 313 forces are “highly trained and equipped with state-of-the-art military equipment.”

What’s worse, the equipment appears to have been seized from U.S. and Afghan forces as Western and allied troops withdrew from the country.

In videos released by the unit, Badri 313 soldiers are seen with military helmets, bulletproof vests, tactical rifles, night vision goggles and armored Humvees — “making them difficult to distinguish from any other country’s special combat units.”

The elite group is now patrolling the streets of Kabul, the Daily Mail reported.

In July, a Soviet-Afghan War veteran named Zaid Hamid told The Sun that the Badri 313 was evidence the Taliban has “really come of age.”

“When I was part of Afghan Mujahideen, we defeated the Soviet Union using the Soviet weapons, either snatched from the Soviet army or given to us by our allies,” he said.

“But Afghan Taliban have gone a step further. They only snatched from the Americans and the Afghan army.”

It’s little wonder, then, that the U.K. government has taken the unusual step of slamming Biden for his “shameful” and “catastrophic” withdrawal from Afghanistan.

On Wednesday, both houses of Parliament held Biden in contempt, and members of all three major political parties found reason to condemn the American president.

Tom Tugendhat, a Conservative, took issue with Biden’s criticism of the Afghan forces and their supposed unwillingness to fight — a stinging rebuke, given that Tugendhat himself fought alongside Afghan troops with the British military.

“To see their commander in chief call into question the courage of men I fought with, to claim that they ran, is shameful,” Tugendhat said.

“The Biden government have just come in and, without looking at what is happening on the ground, have taken a unilateral decision, throwing us and everybody else to the fire,” he said.

Sir Ed Davey, leader of the Liberal Democrats, took his own swipe at Biden.

“The American decision to withdraw was not just a mistake — it was an avoidable mistake, from President Trump’s flawed deal with the Taliban to President Biden’s decision to proceed, and to proceed in such a disastrous way,” he said.

The fall of Afghanistan has the potential to put a strain on the “special relationship” between the U.S. and the U.K., particularly after Prime Minister Boris Johnson spent almost two days trying to reach Biden on the phone regarding the evacuation of Brits from Kabul.

He was eventually able to contact Biden late Tuesday night, according to The Telegraph.

Of course, getting Westerners out of the country is complicated by the Taliban checkpoints set up around Kabul — and Badri 313 troops deployed in the city.

With all-American gear, no less.

Is it any wonder our allies are losing faith in us?